In August 2005, Fabio Palma, Domenico Soldarini and Matteo Della Bordella (at the time 21 years old) opened “Portami via”, a new route on the “Strada del sole” pillar, in Wendenstocke.
For Fabio and Matteo it was the first real experience of opening a route ground up trying to push the difficulty to their limits and to place as less bolts as possible. The opening process took 5 days in total, often in less than ideal conditions, surrounded by waterfalls from the melting snow. The highlight of these days was surely when Matteo solved the crux of the 5
th pitch and went on with a massive runout until the place where he wanted to put the anchor. Only after when he was more than a dozen of meters above the last bolts, he realized the drill got stuck lower down and he couldn’t pull it up and place the anchor. Since he had nothing else but two sky-hooks and the terrain was way too hard to downclimb, he was forced to a desperate lower-out on those two sky-hooks with a single rope! 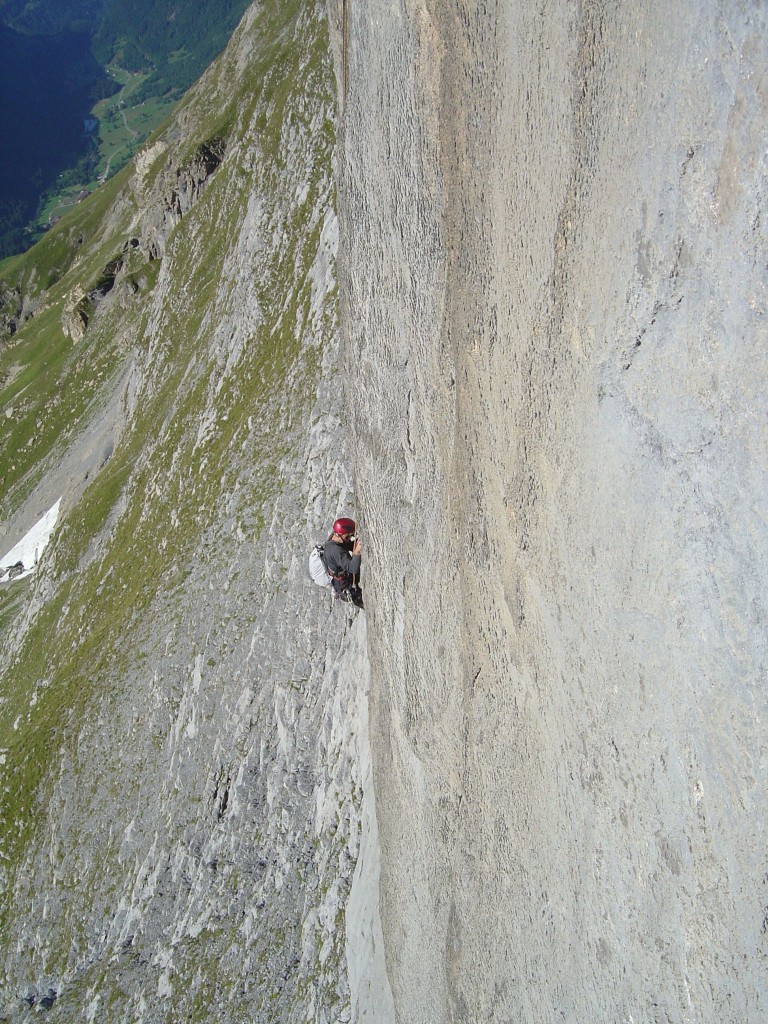 On September 4th 2005, Matteo and Fabio, along with Davide Mazzucchelli “Dade” and Erik Svab, went for an attempt of doing the first free ascent of the route. The day began under bad omens, with Matteo taking two scary falls before being able to send pitch #3 (7c/7c+). Later on, things got only worse; when Matteo was in the middle of one of the several runouts of pitch #5, a foothold broke and he fell directly with his back on a rock pillar leaning behind him. The impact was very strong and it let him unable to breath or talk for several minutes. But after those really scary moments the situation got better and Matteo realized to have been very lucky to still be able to walk on his feet with nothing broken after suck a frightening fall. After that episode, Matteo, Davide, Fabio and Erik, decide to call it a day and never went back. 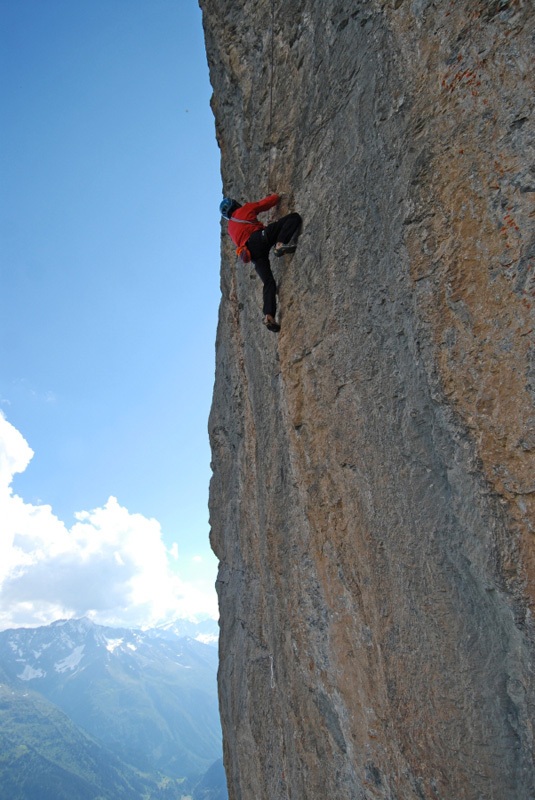 2005: Fabio Palma through the terrific fifth pitch, 7c+. That pitch was opened half by Fabio and half by Matteo. Only 5 bolts in 37 m. Tommy Caldwell said “the most terrific pitch I have ever seen”

In October 2005 Portami Via received the visit of the two Swiss masters Ueli Steck and Simon Anthamatten, which, after a day working the moves, nailed the first free ascent. Ueli Steck commented about the route “It’s a fantastic route, opened in the best style possible, with very few bolts. Both Simon and I think that it is a great route and you gave an amazing effort to open it in this outstanding style.”

Since then not many climbers put their hands on Portami Via. In 2012 Tommy Caldwell, belayed by Luca Schiera, climbed the route onsight, with a major variation. He arrived until the middle of pitch #5 were he couldn’t see the next bolt and took the wrong direction opening a one pitch 7b variation, only with traditional gear, before re-joining the original route!!

In September 2016 Matteo Della Bordella, after one day working the moves of the two hard pitches, went back with Dade Mazzucchelli, the same partner of 11 years ago. After a little more than 5 hours of climbing the pair found themselves standing on the summit with a perfect no falls ascent. Matteo commented: “Climbing this route 11 years after that bad fall, was really a strong mix of memories and emotions. This route and the people connected to it marked deeply my life. It was the perfect way to close this circle and in the end, it was also a great life-time experience”.