Hervé Barmasse, Daniele Bernasconi and Mario Panzeri have carried out the first ascent of the hitherto unclimbed Venere Peak (6300m), China. A difficult acclimatisation before the next adventure, the virgin North Face of Gasherbrum 1. 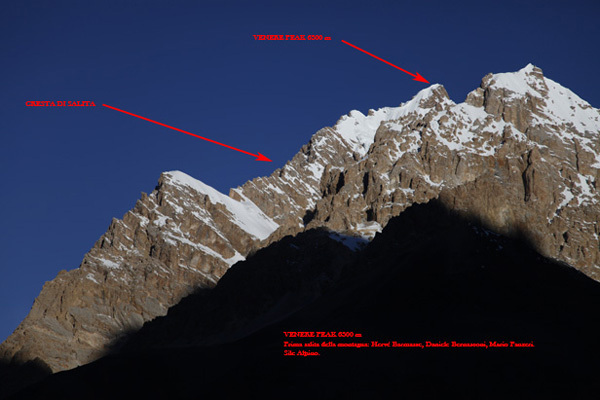 Just a few days ago the Italians Hervé Barmasse, Daniele Bernasconi and Mario Panzeri reached the summit of the virgin Venere Peak, a 6300m high mountain in China. The trio climbed the route as part of their acclimatisation process for what can be considered, without exaggerating, one of the most difficult and dangerous objectives in the Himalaya, the unclimbed North Face of Gasherbrum 1.

Barmasse described the ascent as follows: “A beautiful and difficult adventure. The grade… beautiful and demanding!” before adding “Just a few words and a nice video to describe the first ascent of this mountain which we found pretty tough. Demanding mixed pitches, cornices, deep snow and a descent down a completely different route to avoid the bivvy. Height difference 2150m. Two days, the last 800m in 8 hours… We decided to call this mountain Venere, like the planet which burns brightly directly above this beautiful mountain every evening.”

Hervé concluded by saying “Unfortunately from now on we’ll be without a connection because we’re going directly beneath the North Face of G! and I won’t be able to add any more…” From our behalf we simply want to add good luck to the entire team!