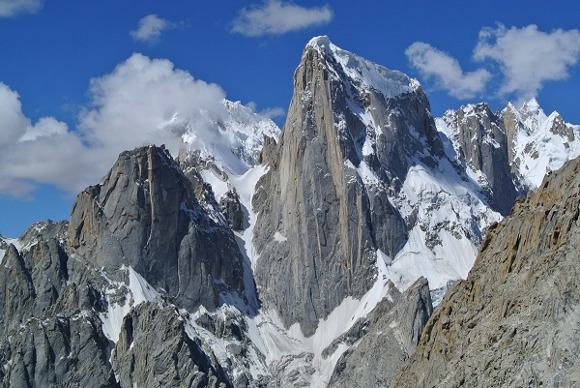 Uli Biaho Tower, and its elegant and impressive South-East face which stands just above Trango glacier, was attracting me since a few years. Less famous than Nameless Tower or Great Trango, but not less appealing, at least from the pictures; I was wandering why while many people climbed the first two mountains, on Uli Biaho there were only three routes, never repeated. Uli Biaho Tower had all the characteristics which I was looking for my first Karakoram expedition: a free standing mountain with attractive lines, the possibility of opening a new route, a maximum altitude of 6108m, which I retain not too high, but already significant (considering I had never been before above 4500m), rock faces exposed to South-East/South-West between 500 and 1000 meters long, a complex and long approach. Having this clear objective in my mind, I had to tackle what in the previous years has been the biggest challenge: find the right partners for such an adventure. But this year I had better luck: already in February, when we were in Patagonia, I shared my project with Luca Schiera, a talented 22 years old climber from Lecco, and he immediately showed great interest for the trip. Moreover our success on West Face on Torre Egger, helped to reinforce our rope-party and our relation on the wall. Back in Italy we immediately had all the support for your project from our group “Ragni di Lecco”, which provided a fundamental help in the organization of the whole expedition. My idea was to open a route “big-wall style”, with portaledges and stuff for more days on the wall, right in the center of the South-East face. Thus we needed at least another two members to form two distinct rope-parties which would have had to lead alternatively

Eventually in a few weeks our team is complete. My good friend David Bacci and his mate Saro Costa join the group. My girlfriend Arianna Colliard is also coming with the main task of collecting photo and video and helping when needed and least but not last, when our team seemed complete, Swiss friend Silvan Schüpbach asks me if he can join. After discussing it with the others, everybody agrees that his addition would be an advantage for the team, given Silvan’s skills on ice and mixed and his experience of bigwalling. None of us has ever been to Pakistan, and none of us has ever been above 4800m, Silvan with his 30 years old, is the old man of the group, when the average of the team is about 26…Despite being on expedition already a few times, for the first time I’m called to lead a such a “big” team and be the reference for all the other members; I’m excited about this role but also worried to be able to do it… Our journey to Pakistan begins on July 17th.

Despite the huge amount of luggage we’re carrying with us, nothing gets lost and the first week of our trip goes really smoothly: the day after our departure we’re already in Skardu and seven days after we’re able to establish our base camp on the moraine of Trango glacier, just in front of the Great Trango tower. Due to our lack of experience our acclimatization was quite rough. We decided to explore the approach to the wall and look for a place where to set the advanced based camp already two days after our arrival at the base camp. We kept going up till we almost all felt sick for the altitude and had to run down as fast as we could. That was really a stupid mistake which caused also some misunderstanding among the team; after some discussions Saro Costa, which had been shocked by what happened, decided to leave the group and go back to Italy. Actually after his departure, our group, that until that moment wasn’t getting on very well, became more and more united and strong. Ten days later, with an improved acclimatization, we finally go through the long approach and manage to get to see our wall. And we’re immediately very surprised, because everything is so different than expected… We were expecting an (almost) flat plateau, after the last snow cornice, leading to the base of the wallà WRONG! A steep couloir separates us from the wall and the only way for reaching the base was doing a 200 traverse on 60/70 degrees on ice.

We were expecting to see in front of us a wall rich of features, at least with some crack and logical lines for free climbing à WRONG! The wall in front of us looked quite desperate, without any evident or logic crack system, the rock also was not of the typical Trango reddish color, but more of a light grey, and from distance, didn’t look of the best quality. We were expecting of descending the couloir easily à WRONG! We eventually realized that the couloir was quite steep and a descent and subsequently ascent in case of retreat, with big loads, would have been problematic. Nevertheless we didn’t lose our hopes! Towards South and West the quality of the rock looked much better and, even if we still couldn’t see the South-West face we were curious about that. After returning to the advanced base camp the following day Silvan, Luca and I start with the idea of exploring the South-West face and start climbing if the weather is still good (due to a problem with our satellite phone we had no weather forecast).; David, who is still not yet well acclimatized, decides to go back. The South-West face, which stands left of the route climbed in 1988 by Maurizio Giordani & Co. on the South pillar, didn’t delude our expectations. Looking from below we could identify a logical crack and flakes system, which we hoped was climbable all on free. The same morning we start! I’ve the honor to lead the first pitch, Silvan leads the second, then I lead again the third. As we thought, the granite is pretty good and solid and the difficulties are moderate but never banal, especially at 5700m. We progress quickly and open 5 new pitches, before deciding to go back down at the base, with the idea of bivy there and the following day go on to the summit. But we didn’t take in account the weather, which suddenly turns bad in the night and forces us to descent at the base camp!

Our motivation is however very high, we still have more than three weeks left and found an interesting line to open. After about a week of changeable weather, spent mostly bouldering and chilling around the base camp, our satellite phone starts to work again and our meteorologist announces a 3 days window from 18th to 20th July; that was enough for us to give it another try! We go to the advance base camp and start early in the night, as light as we can, to save energies on the ice traverse. Despite this is just the approach I’ve always felt like as the route starts on that traverse, which, probably for my lack of experience on that kind of terrain, required me always a deep concentration and significant physical effort; it’s not technically hard but no mistakes allowed there! When I put my hands on the rock I felt much more confident and event more safe with a pair of climbing shoes. We re-climb the previously opened pitches (we had also left one rope fixed) and start opening on new terrain. In the first part of the route we find 2-3 pegs, we’ll find out later that they belong to a French attempt dated 1974. The climb goes quite smoothly on moderate difficulties, despite the great effort due to the altitude, which is for me something new; we follow logical system of cracks and flakes till entering in a chimney. After the chimney, we find an unfortunately soaking wet crack and our dream of a complete free climbing line vanishes. I’m forced to aid these 20 meters under a waterfall. I would like to give it a try on free climb, but finally I give up: besides looking like a river, the crack is also pretty steep and I start feeling the fatigue from the long journey. After 350 meters we join the Giordani’88 South Pillar, we rap down 20 meters to a slopy ledge where we find a poor and slopy bivy place. At the moment Luca starts to feel really sick for the altitude. When we ask him how is he doing he rarely answers and tells us he’s not able to think! Silvan and I are very afraid for him, and we try not to panic.

We think about what we can do; we’re at almost 6000 meters and we can just wait for the next morning and cross our fingers for Luca’s health. We give him a couple of aspirins, but we know that if in the morning he still feels sick we’ve to bring him down. Luckily the next day Luca feels better and that’s a great relief! After climbing two pitches in common with Giordani’s route, we head up left on mixed terrain to the final arête, where a series of short pitches going leftwards leads us to the top! We reach the summit around noon, even if on the very last pitch I lose my watch (damn!). I feel a great emotion for having climbed my first 6000 and on a new route! We’ve just climbed the tower which was in my dreams since four years, and, despite the technical difficulties were not really high, we climbed in a fair and logical way: being the first to find what I think could be the easiest way to ascend this mountain. It’s a great feeling to be up there with such good partners and friends like Luca and Silvan, we made it with our own forces! We spend the afternoon rapping down the wall. Finally we manage always to raps on slings around spikes and we leave on the wall only one peg and one nut. We get to the base in the evening and even if we knew that the following day the weather was turning bad we prefer to spend there the night. The third day we wake up under the snow, we pack and carefully climb the ice traverse which brings us back to our Advanced Base Camp and eventually down at the base camp. That’s the end of our adventure on Uli Biaho and as usually, when everything goes well, there is nothing amazing to tell, but still now that I’m back home, I remain with this good feeling of having realized this big dream with a fantastic team of friends!  I would like to thank Ragni di Lecco for all the support and Maurizio Giordani for all the info and for his ascents which always make me dreaming. 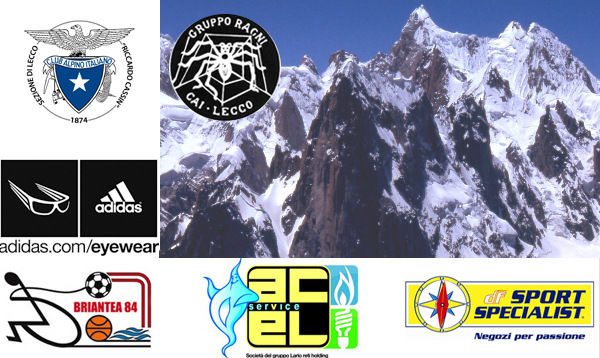