986. 40th anniversary of Ragni group…fifteen of us leave for Patagonia, our objectives are three different towers: Towers of Paine, Sarmiento and Aguja Poincenot. Marco Ballerini, Carlo Besana, Dario Spreafico, Renato Da Pozzo and I want to climb the central tower of Paine. 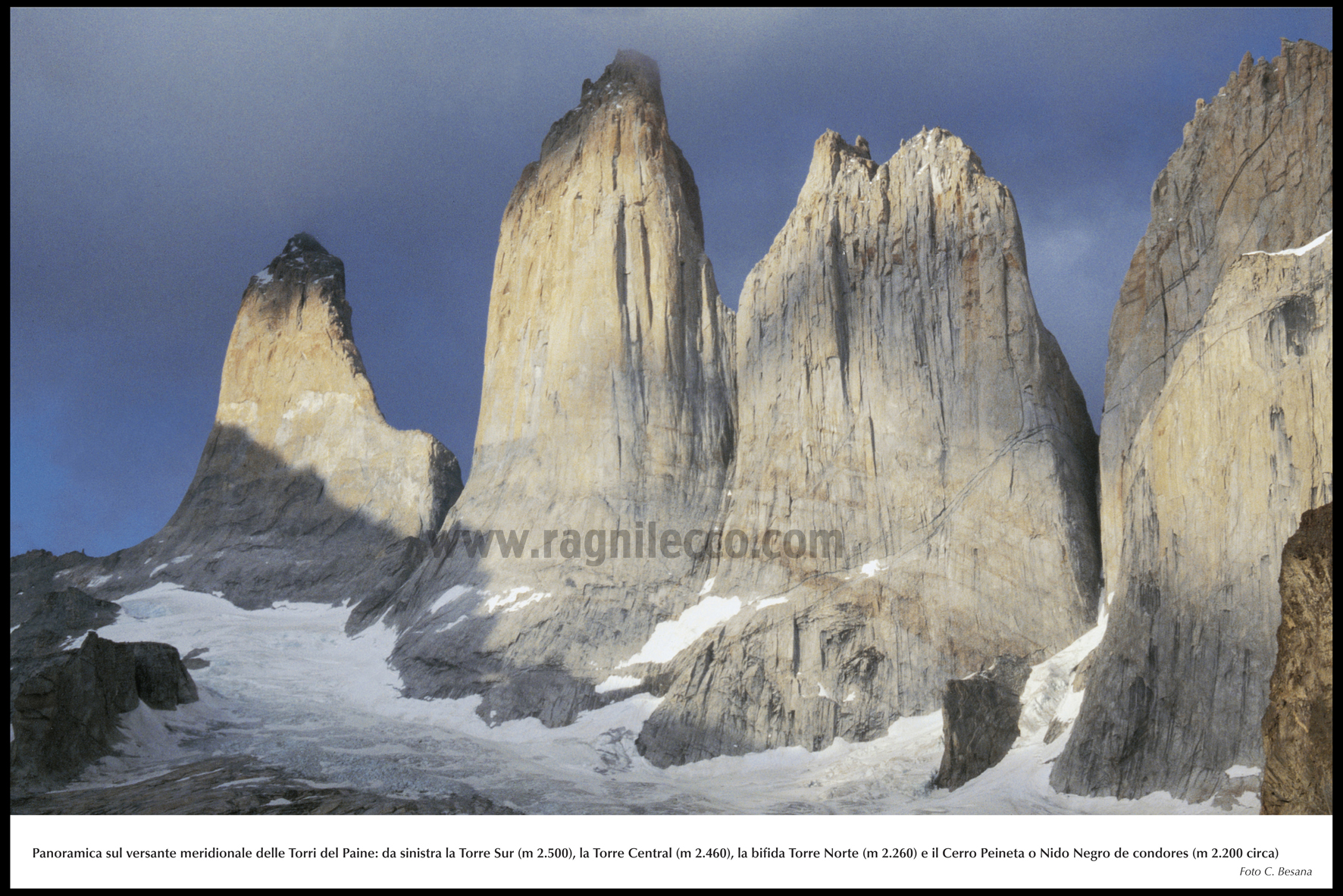 Our troubles begin very soon, since we take a very long time to cross the river and we take an amount of risks usually taken during a whole ascent. We arrive at the base camp, where we meet Salvaterra, Orlandi and Giarolli, which are just back from climbing “magico est”, a new route on the Eastern face of the central wall. They leave us a homemade hut, built by them in the stormy days…but they warn us that we’ve to share it with the Gallego brothers, which have a huge amount of gear. We only have a small haulbag. Did we do something wrong? Salvaterra also leaves us two half ropes for fixing, ours are already trashed.

Of course the following day the weather is bad, nevertheless we start towards the South face of the Central Tower. We begin to climb but the very strong wind literally stops us while climbing, therefore we come down after only two days. Meanwhile on the wall we had seen the highpoint reached by the Spanish, easy to spot because of two huge blue bins. 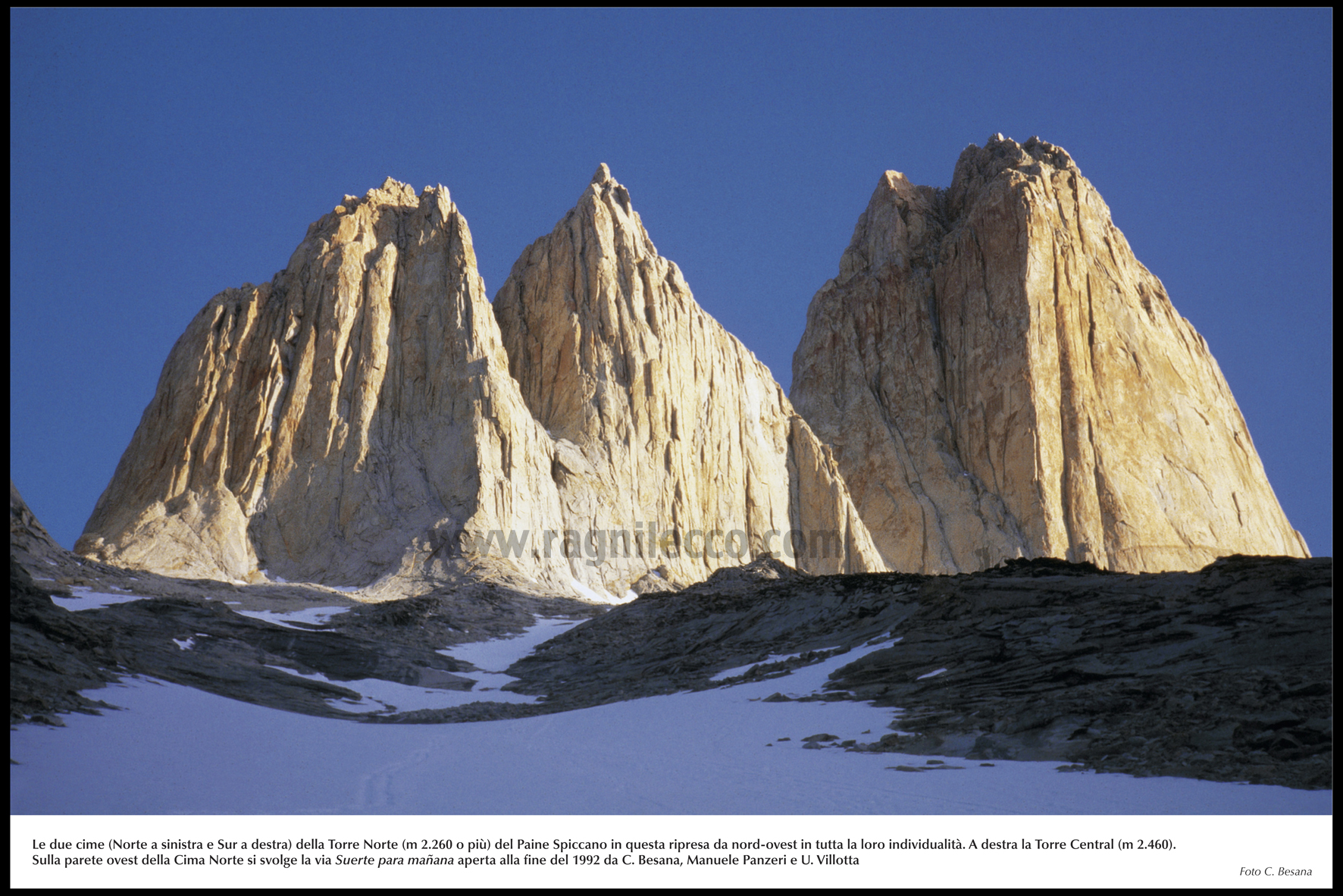 Once back at the base camp we help the Gallego brothers to hunt the mice, in change of some food.

My task for the following day was to wake up at five in the morning and check the weather, and in case wake up also the others. It was a pretty quick task in these conditions. The weather was always bad. The day before Christmas the conditions are still far from perfect but time starts running out so we start…we go back to the wall and we have to aid climb on cracks and corners which would have been easy to free climb if there wasn’t this hell of wind, which is almost ripping us off the wall. Our line is right over the col which divides the Central and the South tower, so the wind is amplified. 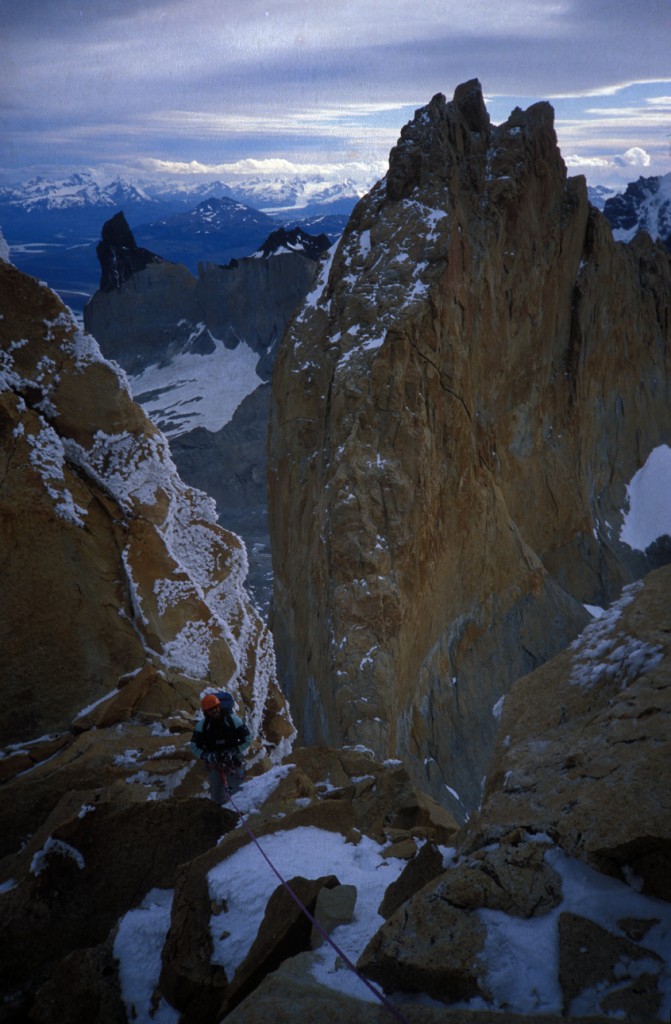 At the beginning of some overhanging cracks we find some old pegs, we’ll find out later that at some point our route crossed the Kearney-Knight. Suddenly the weather clears up and we see the summit…it looks easier because the overhangs are over, but for this reason we find some verglas which slows us down even more also on easy cracks. Eventually we reach the summit, the five of us, at 8 pm of Christmas…our route is one thousand meters long and the descent is going to be long and dangerous since we have to rappel down with this incredibly strong wind, we have to stop for a couple of hours and take some rest on a thin ledge…that’s the Patagonian weather! 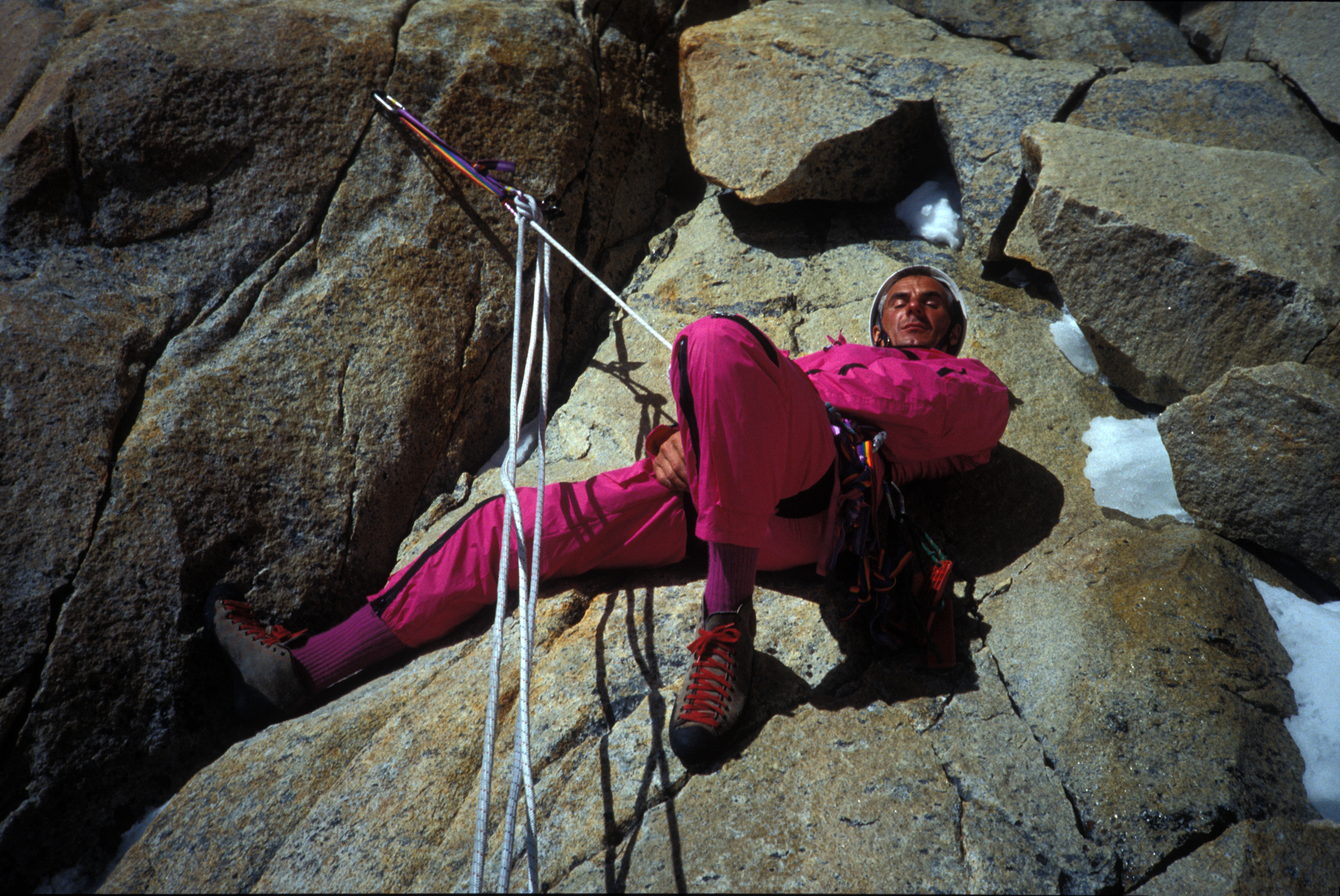 It’s the 3rd December 1992 and I’m back in the Park with Carlo Besana, Umberto Villotta, Manuele Panzeri, Maurizio Garota and Sabrina, our cook at the base camp. For crossing the river now there is a big bridge and in place of the “estancia” there is a luxury hotel, the tourism arrived till here! We meet Bruno De Donà and he almost complains for the good weather because it hasn’t rained for a month and there’s too much dust…from the following day, my dear diary, I cannot tell you how much rain began to fall!

We reach the base camp with the horses and meet Paul Pritchard and his group, pleasant and funny guys; they were trying to climb the Spanish route in a clean style in only three or four days. It’s ridiculous to compare their style with the style of the Gallego brothers: the Gallegos climbed 4th class slabs with tons of bolts and they jumared up with two fixed ropes because once on Fitz Roy a rope broke. I could say that their style is shocking…

Indeed we want to go on the Northern tower, on the North-East pillar; but after a few attempts we give up because there are some loose flakes and chossy rock.

We head to the West side, our goal is to open a modern route and there the granite is reddish and very compact; in the little good weather we manage to carry all the gear to an advanced base camp, at the base of the steep couloir which leads to the wall. 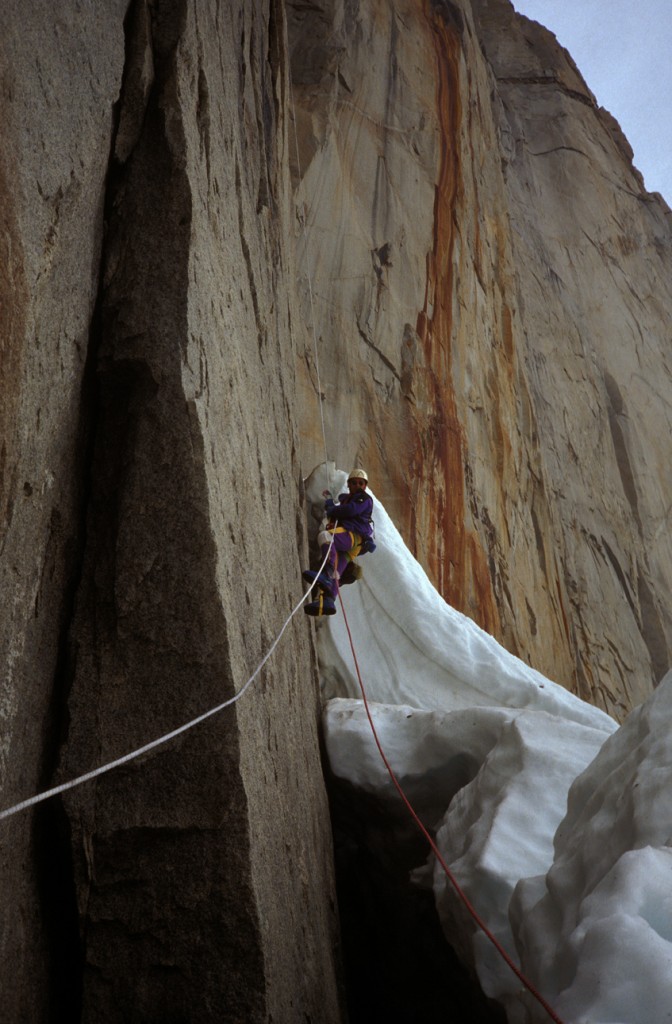 And here we begin to wait for the good weather, twenty long days closed in the base camp, spent reading, carrying food and cutting wood. The 29th of December, with only a few days left, something changes…the wind, that until that moment was blowing from West, changes direction and the Towers show up. The next morning we’re at the base of the wall, there is no cloud! We swap the lead and the route is immediately sustained but nice, by the end of the day we’re already at half of the wall! We go back to the base and, incredibly, the following morning the sky is still clear. On the wall we can enjoy a summer temperature and at 5 pm of the 31st of December we reach the summit…600 meters of climbing are behind, up to 6b and A2.

We named the route SUERTE PARA MANANA, because every morning an Argentinian guy was greeting us with this words. Once back to Punta Arenas the first thing I do is dedicate myself to the food, I put on almost 10kg in 10 days, on the way back on the plane I was so fat that I couldn’t close my pants anymore!