Technical description of the route

The overall length of the route is 1000m, with 800m of new terrain and the last 200m in common with the route “Huber-Schnarf”.

“Notti magiche” climbs what we’ve assessed as the most logical line to get to the top of Torre Egger from the West face. 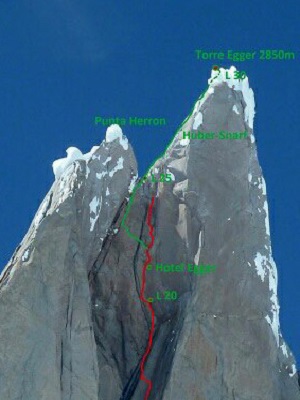 After climbing three easy pitches (V max) and overcoming the snow field at the base of the wall (60 degrees) the route follows a previous attempt from Cavallaro and Salvaterra (1996) for 300m (mainly slabs up to 6c). Then the wall gets steeper and the route continues straight up on the right side of the obvious big dihedral; after 2 pitches on the right (6c and A1, maybe free climbable at around 7b/7b+ if not icy or wet) it goes into the dihedral itself for 5 pitches (6c and A1, a few icy sections) until a tricky tension traverse (1 bolt) which leads to a scary long pitch on chossy black rock (mostly climbed on aid, A2). Afterwards there are two brilliant crack climbing pitches, mainly free climbed, but with a few restings (probably properly free climbable with a difficulty around 7a+/b). Eventually, once got to a belay under a small roof, the route climbs out right (A1) and then straight up for 10 meters.

This is the point where the two lines split up: the 2012 attempt “die another day” goes straight up, climbs a face around 6c and in the following pitch takes the direct way on the impressive roof/overhang, which is overcome with aid climbing on a tiny seam (A2); the line stops 10 meters above the roof into an overhanging corner. On the other hand, the 2013 line “notti magiche”, traverses left, following a logical system of cracks. After two steep but easy pitches around 6c, the last pitch, which leads directly to the col, heads right, climbing a face with delicate rock (7a, 2 bolts) and then reaching a system of cracks that goes until the col where “notti magiche” joins the Huber-Schnarf.

In total we placed 6 bolts on the route (3 at the belays and 3 on the pitches), but another 8 bolts have been placed by Salvaterra and Cavallaro in the first part (all at the belays).

All the belays are equipped with pegs, nuts or bolts and the recommended descent is rapping down the route (as we did), a few pegs and nut can be found also along the pitches.

A poor bivy place can be found at the base of the big dihedral, then until the Col no proper bivy spots have been found; the name “Hotel Egger” ironically refers to our semi-hanging bivy.

For opening the route we employed fixed ropes, which finally have all been brought back to Chalten.

The suggested period for climbing this route is the late Patagonian season, because in the early season the continuous fall of ice and debris from the top can make the route potentially dangerous, while late in the season the wall can more likely be much drier.

Brief history of the route

Three years ago, at a round table in Lecco, the West face of Torre Egger was presented to me and Matteo Bernasconi “Berna” as possibly the last big wall of Patagonia still unclimbed. Mario Conti (one of the legendary “four of the Torre”, which firstly ascended Cerro Torre in 1974 from the West face) and Carlo Aldè (who summited Cerro Murallon in 1984 with Casimiro Ferrari and Paolo Vitali) showed us the a few photos of the Egger West face and provided us little description of what we could have found. This little information was enough to me and Berna to tackle the challenge of opening the first route on this immaculate wall. With no experience of Patagonia, that day I had no idea of what had expected me in the future, nevertheless I was super psyched for starting this new adventure.

During the winter 2010-2011 and 2011-2012 Berna and I, tried our best to succeed on this wall. We had to face situations which were for us somehow extreme, such as my fall on a belay which left both of us hanging on a single cam or the huge fall of ice and debris from the summit mushrooms that forced us to take some objective risks. We learned a lot about Patagonia, its mountains and its unpredictable weather and we also learned a lot about opening a new route on a big wall in such a remote place like this. We arrived at a high point just 30 meters below the col which divides Punta Herron from Torre Egger (known as “Giongo- Di Donà” col or col Lux) and then decided to retreat due to the previously mentioned fall on the belay.

Really little was missing to complete our route but still we had to go back in 2013 to properly finish our job. We thought of opening our team to a third person, in order to be lighter and safer on the wall. Hence, the first name who came to our minds was the one of Luca Schiera, 22; a talented youngster from Lecco at his first extra-European experience. 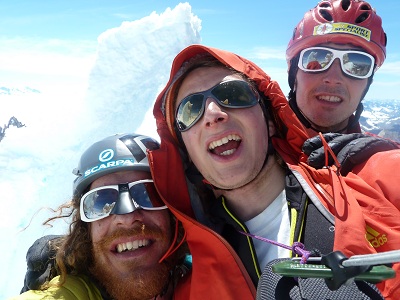 The 2013 trip starts under the best omen, we get to Chalten and immediately climb Cerro Standhardt by the route “Festerville”, that was a good way to test our rope party and gain some training for the big objective Egger. But after that, all the “suerte” flew away and we got more than 3 weeks of changeable and mostly bad weather. Thus 35 days after the begin of the trip, “Berna” has to go back to Italy to respect his job commitments, as originally planned, whereas Luca and I decide to give it a last try.

Wednesday 20th of February we head to Circo the los Altares and then to Filo Rosso where we pitch our tent and settle a small base camp. The weather forecast is definitely “not the best” for those days, but once again, we keep our fingers crossed for the arrival of the high pressure. We wait for 7 days, with changeable weather, for the right conditions to climb on the wall, then finally Thursday 28th February we call our” meteo-man” with our satellite phone and he preannounces four days of good weather. It’s time to start our push!

The first day on the wall we partly re-climb and partly jug on the old fixed ropes left from the previous year (where they were still in a decent condition) and we get to a point two pitches down the high point reached with Berna in 2012; there we spend a night bivying hanging on our harnesses with the feet on the haul bags. A truly “magic night” as Luca will call it!

DSC_1287 Luca Schiera in the last pitch of the route

The following day, Friday 1st March we open 4 new pitches up to Col Giongo-Di Donà or Col Lux, following a different line from the one attempted last year. The decision of changing the line is due to the fact that unlike the year before, this year the wall is pretty clean from snow and ice and under the col, the terrain looks easier rather than the impressive overhangs which we climbed in 2012. After a last, thrilling pitch, which I open with a mixed of free climbing (up to 7a) and aid climbing (A1) we arrive at the col at 4pm. We melt some snow, prepare the bivy and finally take a little rest.

Saturday 2nd March is the summit day. We think of opening an independent line to the top but, retaining it forced and non-sense, we follow the existent route Huber-Schnarf and at 11.20 and we stand on the summit of Torre Egger. It is the moment I’ve desired and dreamt for three long years. But we’re aware that a long and complicate descent is expecting us. I keep repeating to myself that I must be calm and safe in order not to make any mistake; mistakes here can be paid dearly.

Sunday 3rd March we finally complete the descent and at 3.30 we’re back to our tent at Filo Rosso, we manage to bring down all the fixed ropes we used, although we get to the tent hyper-loaded and tired.

We call the route “Notti Magiche” (magical nights) a name which ironically remembers the uncomfortable bivys but at the same time recalls the magical Patagonian nights. The 2012 attempt which stops 30 meters below the col, is truly and independent line, waiting to be finished and will remain with the original name of “Die another day”.

I want to remember that this route is the result of a big team effort and thus a team success.

Firstly a great part of merit for this route goes to Matteo Bernasconi, since in 2012 we opened together the majority of the pitches and even though he wasn’t present on the summit, the route wouldn’t had been possible without him; he is for me a great friend and partner with whom I shared really intense moments; we learned a lot from each other during these three years. An important mention goes also to Luca Schiera, at his first time in Patagonia!

However our team goes beyond Berna, Luca and I and involves the whole Ragni group. Without the support and the trust of Ragni di Lecco nothing of this would have been possible.

I want to thank all the Ragni and in particular the members of the council and Gian Felice Rocca; I also would like to thank all my sponsors, particularly Adidas, Kong and Sport Specialist but also Matt and La Sportiva. Finally thanks to everybody supported and believed into us.

My only regret is having reached the summit without Matteo Bernasconi, both of us would have dreamt of sharing the final success together.

First ascent of Torre Egger from the West face