In January, Lecco Spiders Simone Pedeferri, Giovanni Ongaro, Lorenzo “Pala” Lanfranchi, Christian Gianatti, Ismaele Fosti and Angelo Forcignano reached the Torres del Brujo in the Azufre Valley. The glacier to the main Torre Brujo was wretched, and after two attempts to find a safe passage, the group changed its program. Pedeferri and Pala repeated Il Condor (Stucchi et al, 300m) free and onsight at 7b+. The group then opened two shorter (200m) but interesting routes on the pillars in front of the Torre Brujo, ElTremendo (Pedeferri and Pala, 7b) and Iguana (Ongaro and Forcignano, 7a+). 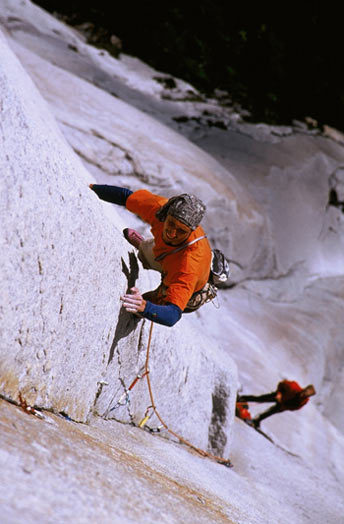 From there, the group continued south toward Puerto Mont and the Cochamo Valley, but a giant lunch of marisco mollusks necessitated a serious side trip to the hospital. Finally the Spiders reached the gorgeous Cochamo Valley, where they admired the impressive granite walls, up to 1000 meters high and truly comparable to those of Yosemite.

The group climbed a few established routes to gain confidence on this granite with its extremely flaring cracks polished by the abundant rain. They repeated Alandala (7b, 400m, FA unknown) onsight and then Pedeferri climbed the 600-meter Gargitter route, La Vista sul Condor (2003). He was forced to aid fifteen meters of Pitch 7 and one meter at the start of Pitch 8; he freed the rest of the route onsight (he recorded sections of 6c+ and harder, eight meters above the last protection).

At the end of the trip, on the beautiful wall of central Trinidad, the group identified a nice new line, and after five days of effort, Nunca Mas Marisco (7c, 700m) was born. It is the only entirely free route on the wall, with few bolts, and, obviously, plentiful use of natural protection, especially Friends.

It is worth noting that the Cochamo Valley usually gets 300 days of rain a year, but our expedition saw fourteen consecutive days of cobalt blue sky. The end of February, as we found, usually rewards climbers. The possibilities for new routes longer than 500 meters are amazing.

Editor’s Note: In February, the Slovak team of Dusan Beranek, Jozef Kristin, Vlado Linek, Juraj Podebradsky and Rastislav Simko also visited the Torres del Brujo. The team managed to cross the glacier that stymied the Italians, where Dusan Beranek and Juraj Podebradsky made the third ascent of Clandestino (7c+ A0, 400m, Meyer-Arbones-Trihn Thieu) on Falso Brujo and established Grand Illusion (9/9+ AF, 8 pitches, 310m, Kristin-Linek-Podebradsky) on Aprendiz del Brujo. A Spanish team was reportedly in the area as well.