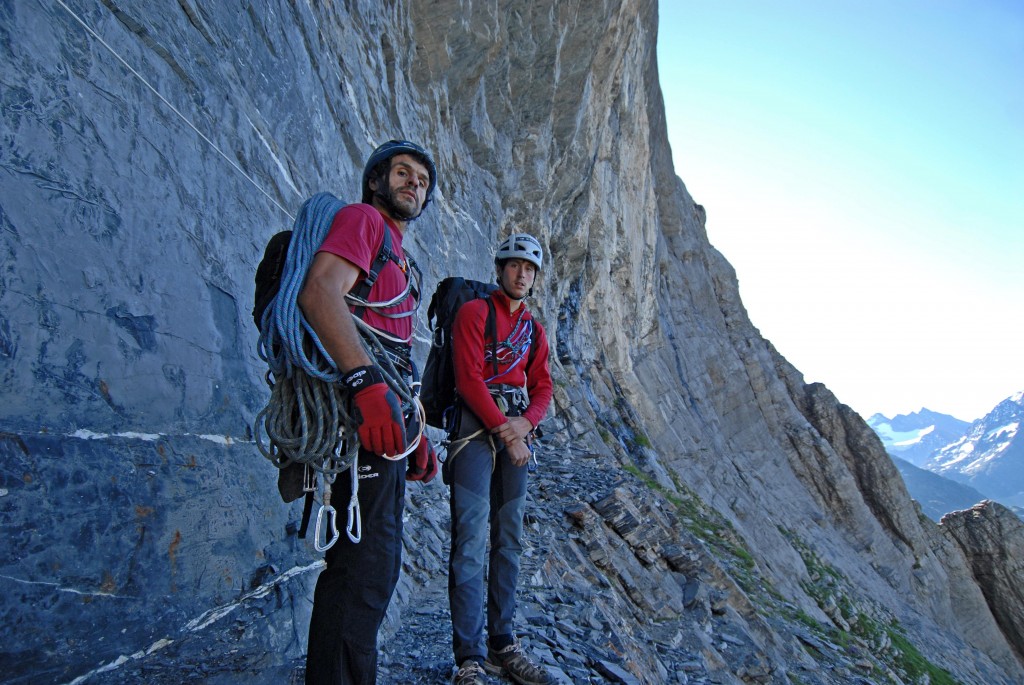 I had listened to harrowing tales of first ascents from one of my climbing partners for the trip, Fabio Palma. The local ethic is to venture up these faces with a few sky hooks, a tail line, and a strong faith that you will find a way to stop hands free. When you get to a stance or a hook

placement you haul up a drill and place a bolt. Fabio believes that bolts should be placed “only when absolutely necessary” which is a very objective thing. So on these routes if a 50 meter pitch has five bolts it’s pretty weak sauce.  Ten to twenty pitch routes can take years to bolt. I heard stories of broken ankles and broken backs, lowering from sky hooks when the drill failed to come free from the last bolt (Editor’s note: Caldwell refers to what happened to Della Bordella on Pitch 5 of Portami Via). 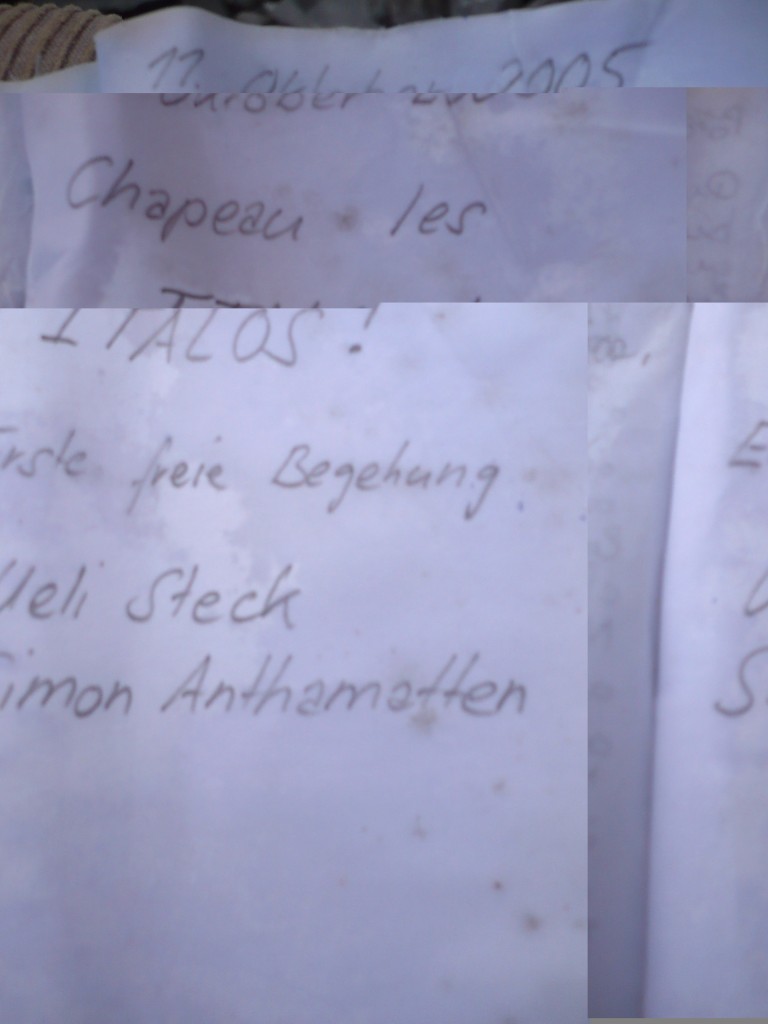 These guys really love to be scared. I had to try it for myself. I partnered up with an easy-going young Italian climber named Matteo Della Bordella, a really amazing climber. We were most excited to climb in the Wendenstock, but weather forced us to go to the Rätikon. Not a bad second choice. The Ratikon was an early proving ground of this ground up, minimally bolted ethic. The routes are 1000 to 1500 feet tall and the rock is perfect. We warmed up by climbing the most sandbag 7c route I have ever done in my life; a route called Acacia that, despite being very famous, has yet to be on-sighted. Seven pitches took us more than eight hours. I had to redpoint a few of the pitches on our way down and we touched ground just as a thunderstorm hit. 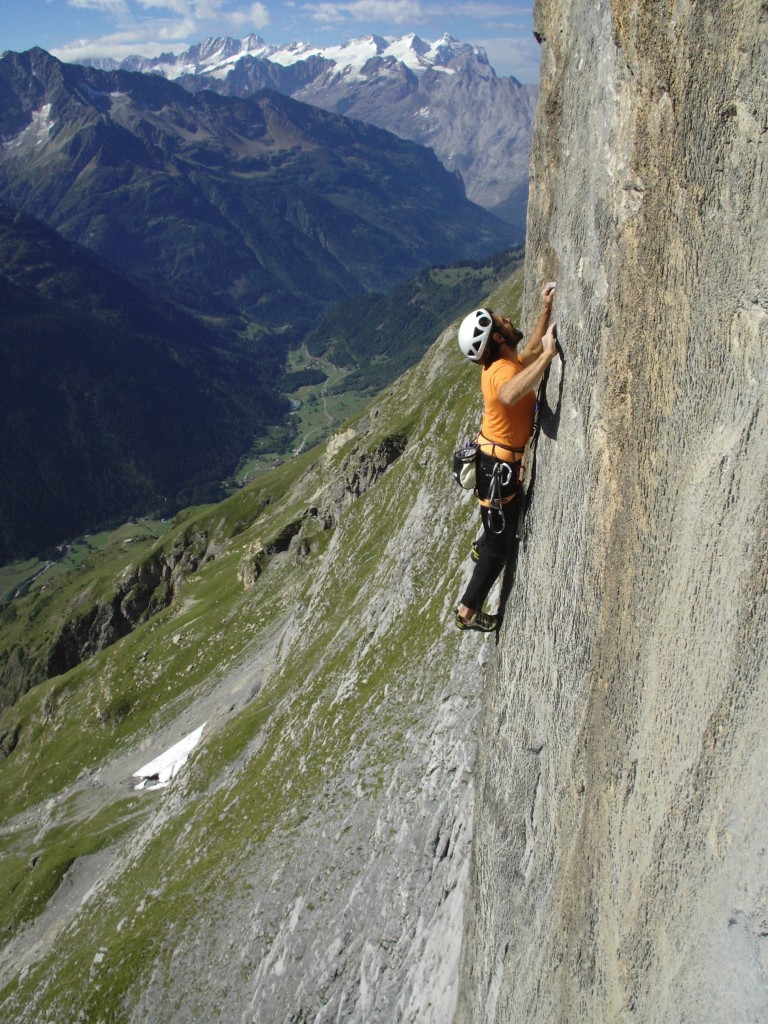 I think something was lost in translation. I vaguely remember hearing some kind of warning from Fabio when he recommended Portami Via. When I was 50 feet run out on bad rock pulling 5.12 moves I was pretty sure he was trying to kill me. This time I had teamed up with another Italian climber named Luca Schiera for ten straight hours of death crimping. Bolts were so far apart and elusive that on one 7c+ pitch I never did find them and ended up climbing a variation by placing every cam I brought and (according to Fabio) the first nut ever placed in Wendenstock. I managed to climb the route without falling (thank God). To get down we rappelled the route and as soon as our feet hit dirt Luca immediately dropped to his knees and kissed the ground. When

we got back to the camp I learned that Matteo and Fabio never did manage to send this one. (Editor’s note, Matteo had taken numerous 50 foot falls during which he injured his back). Only Uli Steck and partner Simon Anthamatten had managed a complete ascent.  On one hand I felt a little sandbagged, but I am sure it was unintentional. I had grown to love my new Italian friends and the energy that adventure breathes into their lives.

TOMMY CALDWELL – EUROPEAN CLIMBING DAYS
Day 1, Val Bavona, Supercyrill, with David Bacci
Climbed free by Giovanni Quirici, David Lama, Matteo Della Bordella, Barbara Zangerl, Ines Papert, Tommy on-sighted the crux pitch (8a+, but according to Tommy in Yosemite this would be graded 7c), just like Lama, but needed two gos for the 7b+ and 7c+
Day 2, Rätikon, Acacia, with Matteo Della Bordella
Both climb this historic Martin Scheel route, never on-sighted previoulsy (in truth Manolo was unfortunare as a hold broke off the easiest pitch, the 6c…). Tommy sent two pitches second go, Matteo needed two gos for the final 7c+.
Day 3, Voralpsee, crag
Day 4, Claro, crag
Day 5, rest
Day 6, Engelberg, crag.
Day 7, Titlis parete Nord, Land ohne Herren, with Matteo Della Bordella
Both on-sight Land ohne Herren, 10 pitches up to 7c
Day 8, Wenden. Portami Via, with Luca Schiera
Onsight except for P5, where Tommy climbed off-route and instead he established (on-sight) a 30m 7b variation to the orginal 45m 7c+.
Day 9, Wenden, La Svizzera, with Matteo Della Bordella
Up to 8a+, Tommy on-sighted all pitches except for a 7c+, which he sent third go, while Metteo flashed this pitch and fell on the two lower pitches.