By Andrea Pavan and Daniele Tavola 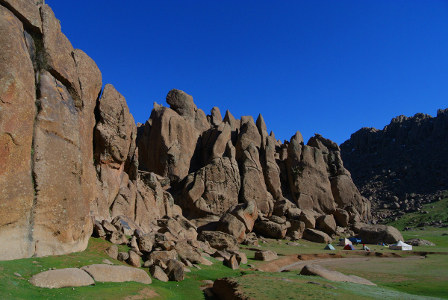 We start out, Daniele “Neno” Tavola and I, with three others friends: Andrea Merisio, Marco “Papa” Gualtieri and Garcia Frigo.. The target of our trip is the exploration of a wide area of boulders and towers located roughly at 200 km south of Marrakech in the plateau of the Massif of Jebel Siroua at an altitude of 2350m.

Let’s say first of all that the area has already been visited by Spanish, English, and French climbers.

However, in view of the great potential of the spot, there are still huge opportunities to clear new boulder passages and countless climbing routes.

According to the information available, we determined that the best time to go there is in April; this year was also particularly poor in snow so we should find perfect conditions.

Landed in Marrakech, after having slept the first night at the village of Tamdakht, where we also had the chance to climb on a nice boulder of limestone, we move to the region of Amassin, towards our destination.

The road 6801 ascend slowly and the landscape, with increasing altitude, changes gradually from desert to alpine; the green pastures and blooms, suggest more to being in Swiss rather to being in Africa!

But we are in Morocco, and the dirty roads are not always as those of Confederation (Swiss, Editor’s Note). Indeed, just before reaching to the pass of Touggoukine at an altitude of 2519 m.s.l., when we werealmostarrived atour destination, the road ends in void.

Due to a landslide, we make a wide detour and there, our 4×4, remains lockedina morass.

After a few hours we finally unlock the vehicle by using a tractor that had been mired the day before and was pulled out of the mud with the help of three enduro motorcycles, that, fortunately, they passed by there.

Finally we come to the boulders area, where the guide and the cook are awaiting our arrival.

The place is wonderful, we built our base camp.

Here the green of the meadows is in contrasts with the red of the stone and the blue sky … and boulders are everywhere! In the late afternoon we begin to climb existing climbing routes and clean new lines.

Garcia clear “Mr. Caraway,” a overhanging plate with laths of rock very “fingered”, while “Papa” and Andrea try on a very nice roof rock, doing some resting : we are excited for the next few days.

Last but not least: our guides are very nice and friendly and they cook really well, what more could you want? That the weather remains perfect as the first day …

The next morning we wake up with gusts of icy wind, tearing the tent pegs worse anchored, the sky gradually get cloudy and, in the late morning, begin to drizzle; the wind increases more and more intensity and wind gusts fold our tents.

But we are comfortable and we make a hearty breakfast with local hazelnut cream, the legendary “Sergio” and a kind of omelette, called by locals “crepes thousand-holes” …but for today we realized that we will rest all together in the large tent kitchen.

Habdul, our guide, assured us that in the Massif of Siroua the bad weather lasts no longer than a day. Perfect!

Sipping mint tea, the rain turns into snow and the temperatures drop below zero, allowing the creation of cute ice candles on the sheets of the tents and on the edges of the blocks that we would have to climb the next day.

The snow and violent gusts of wind, lull us all night long and for the next two days. The only dry place to stay and rest is the tent kitchen. For two days we just have to eat, play cards and dream up about boulders that we wanted to find and climb.

On the third day, considering the 30cm of snow fell and view that does not seem to stop, we agree that instead of the crashpads would have been better to bring ice ax and crampons.

After a quick exchange of points of views we make the decision to walk away and move on to plan B: Escape from the base camp with mules!

In fact, the dirty roads are covered by snow that would melt completely after a few days.

Moreover, even if he had stopped snowing the next day, the snow that had fallen the previous days would not have allowed to climb for at least the next 3-4 days.

Under a weak snowfall, we do recover from the shepherds with mules coming from the remote village of Amassine, located about 8 Km from our base camp.

Once loaded the mules we leave, and after 4 hours of walking we reach Amassine, where a jeep waiting for us to bring us back in Marrakech.

The bad luck, at this point, suddenly ends: along the N9, which from the pass Tizi N’Tichka get to Marrakech, we notice some sandstone blocks surrounded by a pine forest above the road.

Once got out of the jeep, after a quick look, we understand that the quality of the rock is really high and after a quick cleaning, would be born, with no doubts, new and beautiful passages.

Here, we are the firsts; In fact, on the stones we find no signs of chalk or brushed and cleaned holds.

Once arrived in Marrakech, however, we took a day’s break to evaluate what to do and take the opportunity to visit the quaint bazaars that overlooks Djemaa el Fna.

Here we spend some nice hours of delirium, trying to negotiate the price with real professionals.

In the souk, the whole atmosphere, the voices, the colors, the smells, the shops, it pushes you to one thing: spend all the dirham that you have in your pocket!

However, they do their business; but at the end we leave satisfied, even if fatigued after had trading more than an half an hour…

Plan C: hire a car for the last three days, and from Marrakech, in about two hours, get at Toufliht, our new target.

The boulder area is located approximately 1 km south of the town of Toufliht, facing north at approximately 1350m of altitude, surrounded by a pine forest that offers shade throughout the day.

After the usual cleaning, we are able to clear almost twenty problems, and climb a dozen of them.

So we immediately notice two large boulders, where first problems will arise: “Aziz,” a difficult traverse on crimps with a difficult turn movement on dihedral; after that we clean “Edge champignon” a nice corner on vertical crimps.

New problems born quickly: “The fart’s company”, “The break-wrists”, “forbidden to fall”, “Marocchio” and the challenging “The Cook” and “The slave”, released by Mark.

Some problems remain projects, some, certainly feasible, we had no time left to climb up, but others are really hard!

During the climb, we are in the company of the children of the neighboring village, who spend their days watching us and probably asking to themselves about how much crazy we are, to come from so far away for clean some rocks a few meters high with a wire brush, without maybe be able to climb them.

The funny Aziz, in particular, keeps us company for a long time, proving to be interested and also helping us in cleaning the block!

Going back talking about the rock, the sandstone is very solid: solid as that of Paris, red as that of Albarracin.

The passages are various: corners, cliffs and crimps, compressions, plates with crimps.

The potential of the site is not huge but we estimate about a hundred passages yet to be cleaned, upstream of the road, always with an excellent rock quality.

And with the increasing of the radius of action, in the woods located downstream of the road, the potential increases too, but you should go and check.

The plateau ofSirouaseparates theAtlas Mountains from that of the anti-Atlas. It’s located about 50 km south of Toubkal, the highest peak in Morocco and North Africa.

Marrakech, located further north, is about 250Km. The boulders are located at the base of wide valleys at an altitude ranging from 2500m to 2200m.

Considering the altitude, during winter months, it may be difficult to reach the boulder area by means transport due to possible presence of snow.

During normal seasons, the snow melts by mid-March, but snow out of season are also possible afterwards.

Preferred, however, the spring, for the lush vegetation and flowering meadows but also for the presence of water from snow melting, which is used for cooking and all the needs of the field.

You have to consider that until april, the villages in the vicinity ar inhabitated, so you must be self-sufficient in all.

However, there isnetworkfor mobile phones.

To reach the massif of Siroua, once arrived in Marrakech, go head south along the P31; about 23Km before getting to Ouarzazate, take the P32 and, after reached Anezal, turn right towards the Tamallakout.

Once you have passed the village of Tachakouch, the road becomes a dirt road and you’ll need an off-road vehicle, preferably with winch to refloat the means in case of problems.

Overcoming the detour to the village of Amassine (countless blocks present) and onto a dirt road that descends to the right (you can clearly see the climbing site), you arrive at the main site of climbing spot just before the village of Aziwane.

The climbing site is located along the northern slopes of the Atlas Mountains approximately 80 km south of Marrakech, on the road P31I, there are rocks at an altitude of about 1350m, in an area fairly shady and relatively moist.

In case of bad weather, it is better to wait a day before going to climb. To clean new lines needed a brush to remove moss and lichen. To sleep and eat, there are small hotels and Gites d’Etape, along the road to Marrakech (P31). There is cellular network for mobile phones.

A special thanks to “Gruppo Ragni – CAI di Lecco” (Spider Group of Lecco), that among the first to have promoted the exploratory bouldering and have made it possible to undertake this challenging, although not very successful trip. Thanks also to Adidas and Skylotec for the technical support provided. 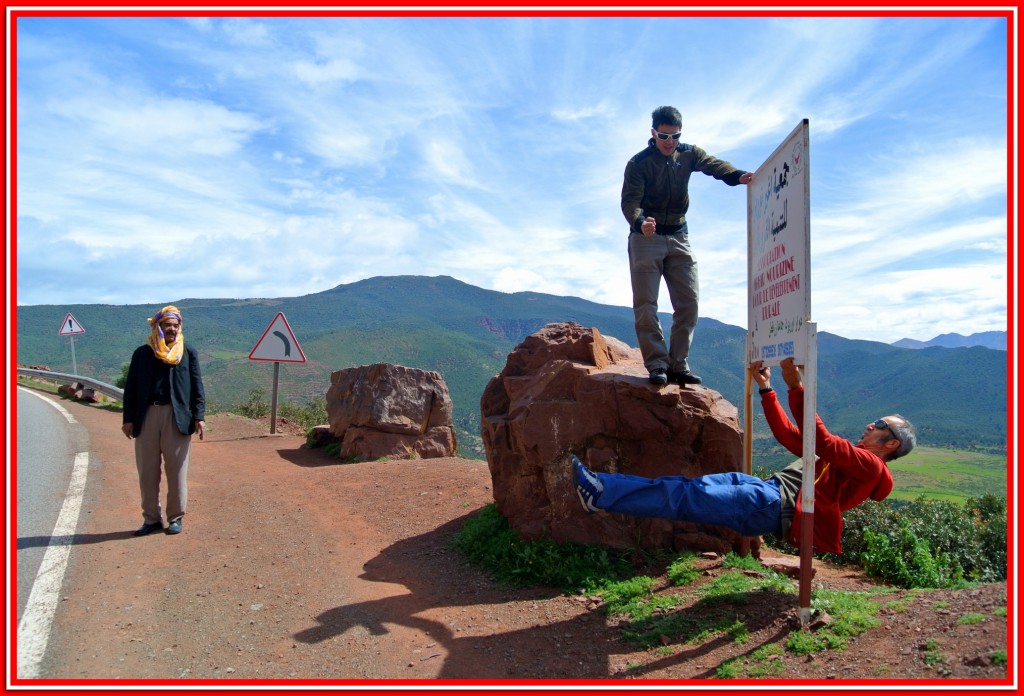