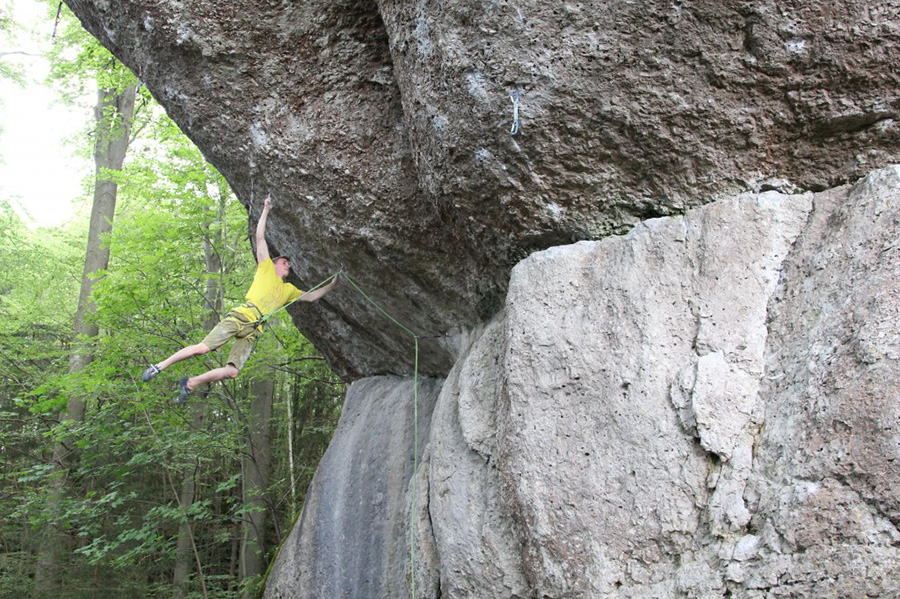 Two days after celebrating his 18th birthday, Stefano Carnati rejoiced with an unexpected gift: a repeat of Action Directe, Wolfgang Güllich’s masterpiece at the Waldkopf crag in the Frankenjura, Germany, freed by German climber in 1991.

In its 25-year history, this fierce line of single finger and two-finger pockets has transformed into the world’s 9a benchmark, an absolute reference point that very few other climbers have managed to match. Carnati first began attempting the route in August 2013 and immediately struck a cord with this extraordinary limestone bow that juts out of the forest at 45°: he managed to do all the moves, except for the infamous starting dyno. He returned in 2014 and realised he wasn’t strong enough to link all the moves, while precisely a year ago, in June 2015, he fell of the last hard move on the final day of his climbing trip. Getting to grips with the intensity of the moves a few months later proved difficult as sweltering summer temperatures up to 38°C and a damaged meniscus resulted int the Ragni di Lecco climber failing to stick a single move.

Carnati didn’t give up and yesterday, after more than 60 attempts, he managed to complete the “end of a dream which was turning into an obsession!” The result – highly significant – comes after a run of impressive achievements including his first 9a Coup de Grace in Val Bavona in November 2015, his first 9a+ Goldrake at Cornalba in March this year, his first victory in a stage of the Italian Lead Cup at Biella in May and victory in the Under-20 Italian Championship in Arco in early June.

Commenting after the ascent, Carnati explained “With this route I’ve understood how hard it could be to try a route at your limit far from home. Since I started climbing, I’ve always had the desire to try it one day as I really like pockets but above all for its history!”