On Saturday, Sept. 11th, 2010, Matteo Della Bordella was back on the south wall of the easternmost of the Cime d’Auta, (in Dolomites, near to Marmolada) where ten days earlier, with Luca Auguadri, carried out  the first repetition of 2 spit alla fine, a rather expo route (8 pitches 8a, 7c obl.) opened in 2007 by Manolo and Omar Genuin.
This time, with Alexander Baù, managed the onsight ascent of Spirit: 10 pitches  graded 7c / 8a. Spirit was first ascended by Alpine Guide from Cortina d’Ampezzo Massimo da Pozzo (Mox) with Danilo Serafini and dates back to September 2003.
Before Matteo, also Ricky Scarian and Manolo onsighted  Spirit, ( Manolo graded  the route7c – Matteo agrees) The intention of Alexander and Matthew was to complete the repetition of Fantasia, the great route of Maurizio Giordani on Marmolada south wall,  where few days ago the two had to stop just seven pitches from the end due to the bad weather. Even this time, however, had to change target  because the wall was very wet. 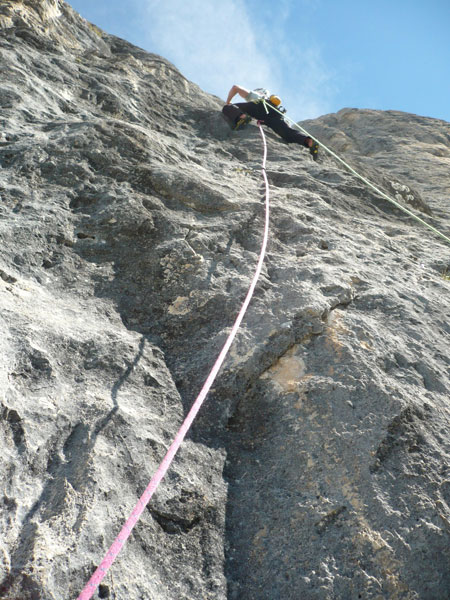 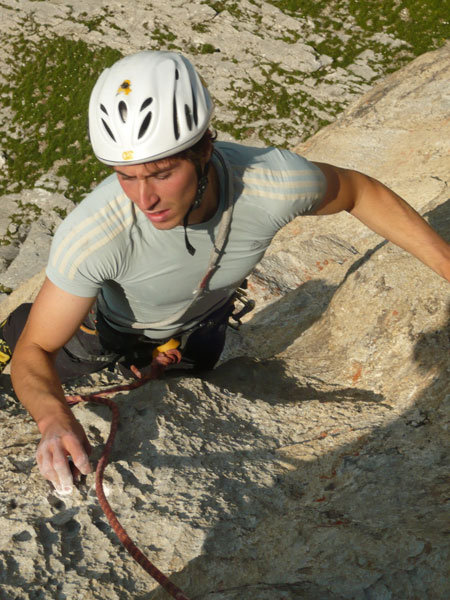 We asked Matteo a few words about Spirit, here they are:

“It ‘s a very beautiful route, the same solid limestone full of small pockets as in the nearby “2 spit alla fine” and also very similar to that of the Marmolada. Compared to the route of Manolo, this  is more sporty , impeccably bolted, you always have beautiful sequences between bolts but the distance is never excessive and such that the route becomes dangerous (except on easy part, of course). The crux is on the vertical face-climbing, climb it on-sight  for me was a real fight because it was not easy to read the rock without any sign of chalk . About the degree I can’t say, I was at my limit, but maybe I have also complicated my life by myself  in some sequences.
Too bad you have finished the routes  to do at Cime d’Auta, there would more like “2 spit alla fine” or “Spirit”! “