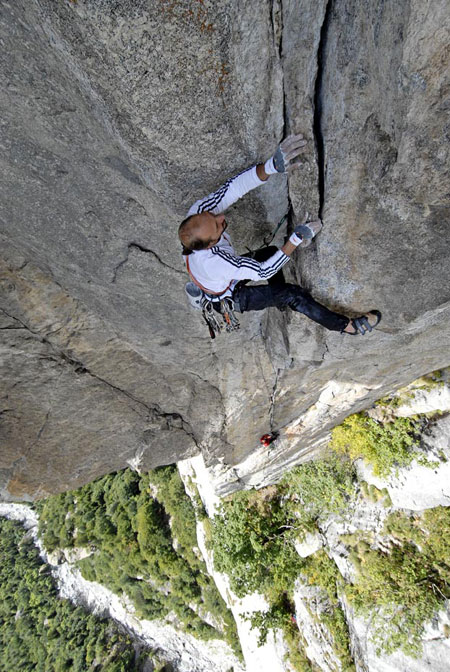 Once again Simone Pedeferri has undertaken a vagabond journey up one of the massive rock faces in Italy’s Val di Mello. This time his vertical “escape” took place up the 700m high “Non sei più della mia banda”, a route name which translates into “You’re no longer part of my gang”. This massive route, or better still, “spectacular climb” as Luca Maspes defines it in his valuable chronology of climbs in Val di Mello, was first ascended in 1993 by Stefano “Pizza” Pizzagalli, Domenico “Dodo” Soldarini, Stefano Gaffuri and Cesare Romano with difficult and run-out free climbing up to 7a+ obligatory, to which were added some aid sections up to A2.

Seeing that the rock face is the fantastic Precipizio degli Asteroidi, more precisely the overhanging section called the Abisso, Pedeferri’s recent trip is certainly one which deserves a truly special mention. The climber cum artist needed two days to equip the route (fix rope and replace some old bolts) together with Maspes, before spending four days on his own cleaning the line and attempting the moves for the eventual free ascent which required two variants to the original line. And then, together with his friends Fritz and Paolo, Pedeferri completed the redpoint on 3 and 4 September. Pedeferri believes the maximum difficulties equate to 8a+ and 7a+ obligatory… But, he adds, there is more, as can be gleamed from his report below… We certainly believe him. Otherwise what sort of trip would this have been?

I turn on my headtorch, it’s got late today up on the rock face. Or perhaps I wanted it to get late, just like I wanted to experience large part of this vertical adventure alone. The moon rises behind the Disgrazia rock face, beautiful, full and imposing like in a Kubrik film. I switch off the torch and descend the final 50m of fixed rope in the silver light of the moon. Not far from here lies Civilisation, but I want to sleep at the base of this wall because my body, after 14 hours of climbing, is too tired, and this is exactly what I want… a fantastic sky, hands shredded and numb, feet swollen… today I gave it everything I had… With my back against the haulbag and the sleeping bag wrapped over my legs I wait for the stove to warm my food, my head is cradled by Pearl Jam as I reclimb all the sequences of the Route I tried today, alone above the void, dangling from the rope…

At the end of June I had sent some projects at the crags below and the stable weather in July immediately enabled my to repeat a dozen or so routes in the Alps with different friends. In doing so I experienced a series of adventures which could have satiated my thirst for the vertical… and at the end of this tour I even managed to free “Un Poco locos” together with Davide, a new route first ascended in 2008 with Ongaro, Maio and Spini himself on the Picco Luigi Amedeo rock face… But I still felt a need, I yearned for a totalising experience, a free ascent where my body and mind could wander for days, just like the Joy Division… I wanted to experience a rock face alone, attempting the moves to discover the key to my small vertical universe.

I don’t climb alone on a wall out of selfishness or to reflect about who knows what sort of meaning in life, but only to climb, to ascended and to not ever have to stop, while the pully slips through the rope my body follows… this is what renders me Happy now… it’s incredible how my body and mind focus on that meter of rock to find a solution, to continue climbing upwards… It’s not like when there are two of you on a redpoint, or when you’re climbing alone where “everything goes”; I need to climb even up the most exposed sections, my body is tense and there’s no room for the rest of the world, only those two meters exist in my mind, then the next two and so on, surrounded only by the void and the wild rock face which envelops me.

“Non sei più della mia banda”: two days to equip the Route, and for this a heartfelt thanks to Luca, then four days spent cleaning and attempting the moves alone, while the redpoint was carried out on 2 and 3 September. I put forward 8a+ max, 7a+ obligatory, nevertheless though this will never explain what a climber experiences in all those moments during the climb, will never help understand what is necessary to know, comprehend, enrich one’s personal climbing culture and to use these means to live through certain moments in life, to be able to enjoy certain sensations which will never abandon you. Thanks to my friends who helped me with this adventure and thanks to the first ascentionists of this Route… and above all to Stefano “Pizza” for the distance between the bolts, placed by hand almost twenty years ago…