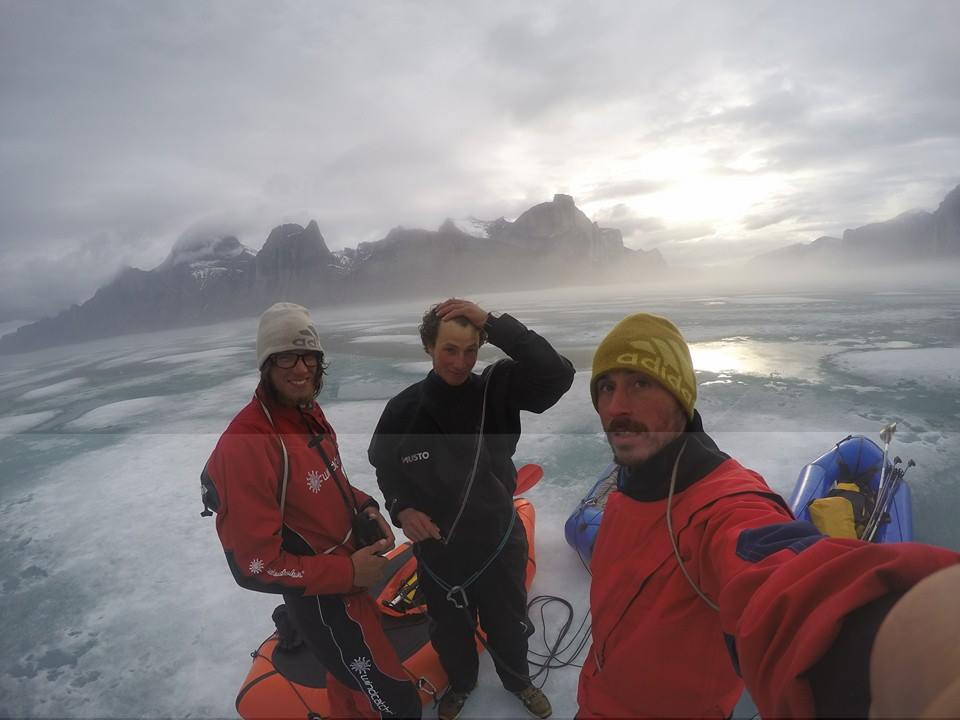 In summer 2016 the three Ragni di Lecco Matteo Della Bordella, Luca Schiera and Matteo De Zaiacomo “Giga” (all sponsored by Adidas) joined their forces with two of the strongest and most famous climbers in the world: the Belgians Nicolas Favresse and Sean Villanueva, for an adventure in Baffin Island, Canada. This expedition was also the best way for the three “Ragni” to celebrate the 70th anniversary of their prestigious group

The Belgian duo, Nico and Sean, are famous and well known worldwide, besides for their extra ordinary performances on the rock, also for their unique style made of live music played pretty much everywhere, also when hanging on a big wall with bad weather.

What we were looking for, in this expedition, was not only a remote and wild place, with some beautiful, steep and hard big walls to free climb, but also an experience going beyond the pure challenge provided by the mountains and the climbing. We were looking for a trip where already reaching the base of the wall and/or coming back to the civilization after having completed the ascent, would have represented already a big adventure, even if considered on its own.

On June 3rd we left the village of Clyde River, with a temperature around 0 degrees. The landscape was completely white of snow and the sea was still completely frozen. The distance from Clyde River to the Great Sail Peak (a beautiful 1100 meters big wall which was our main goal) was about 200km. It took us 7 days to cover this distance, skiing on the frozen sea and pulling behind a sledge.

After a few days spent waiting for better and warmer conditions, on July 24th we set off to Great Sail Peak. Inside our haul bags we packed everything we needed for staying 12 days on the wall and the dream to be the firsts to free climb this amazing big wall. 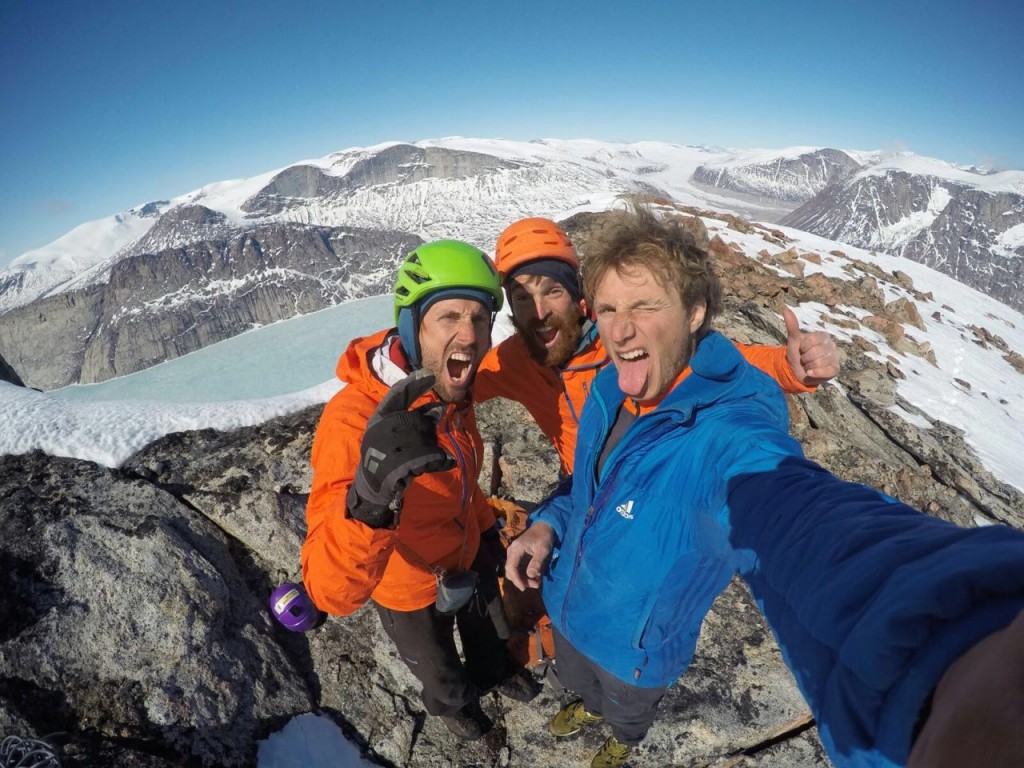 The climbing days passed slowly and some of the pitches required several hours of study and different attempts to be free climbed (often on really tiny gear like peckers or micro-nuts). The morale of the crew was always high, thanks also the big wall concerts organized every evening by the band: Sean with the flute, Nico with the guitar, Giga with the violin, Luca kept the rhythm and I was singing (usually the Italian Hymn or “Bella Ciao”, the only songs I knew all the lyrics).

On the 6th day on the wall, the weather turned bad and we were forced to wait for 36 hours in our portaledges, hanging on the wall. Then we started climbing again and made a push for the summit: we reached the top of Great Sail Peak, at about 5 am, after having climbed all night long, of the 4th of July, which is the day of my birthday! It was an amazing present and I couldn’t imagine a better way to celebrate!

After we descended, we realized that we had used only 9 days for this climb; there were still another 3 days of food left and the weather was perfect. So we started for what might sound as a crazy idea: split in two teams and re-climb the same wall, following different lines, opening two new routes, alpine style, fast and light.

I teamed up with Luca and we re-started for a new adventure. Despite a bad fall, a core-shot in a rope, that was almost got cut, and the bad weather which surprised us on the upper part of the route, on July 8th we were once again on the top of Great Sail Peak, for the second time, just 4 days after our first. Nico and Sean also arrived a few hours later, after having climbed the wall for another beautiful and aesthetic new route.

The main goal of the expedition was 100% reached, but the adventure was not over yet: the long return to civilization was waiting for us.
Meanwhile, the Arctic landscape had completely changed: where the sea was frozen now there was just water and where there was the snow, now there were just rocks and some shy flower: the summer had eventually come also the 71st parallel North!

After a last big wall concert our plan was to split the team: Luca, Giga and I planned to go back to Clyde River with pack rafts; Nico and Sean planned to wait the arrival of some friends with a sail boat and continue the expedition through the legendary “North-West passage”.

Therefore, we jumped on our pack rafts and following a rather different and more direct (only 170km) way than with the skis we took 9 days to reach back Clyde River. During this time, we had to alternate paddling to pulling the pack rafts on the ice and walking in the tundra among clouds of mosquitoes.

The adventure ended in the best way on the 15th of August when also our Belgian friends made it back to Ottawa by plane, after miles and miles of sailing among icebergs and polar bears.