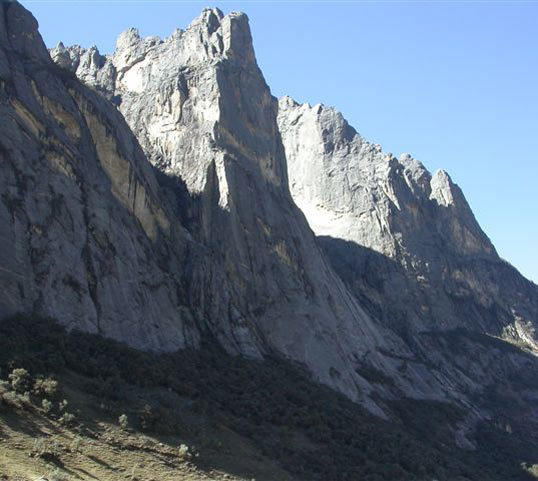 Rurec….the stars shining were incredible, but fleeting for the cold, we were escaping into the tent. There were condors and flowers without the stem because of the wind. There were forests up to 4500 meters and summits at 6000, which were crashing us, who were staying at 4000. There were grass fields plains as gardens and as big as stadiums, but frosty for 15 hours a day. Down in the village, twelve km far by foot, there were kids which were always smiling and colorful people.

There were three guys out of place, we were them, which came there for climbing, and in the end all that granit didn’t care about us, it was smooth and enigmatic, in fact we were climbing with difficulties, out of breath and I think that I was out of place over there, but in the end who knows if a “placeholder” for everybody exists or not, what do you think? There was a guy which never stopped, he was never tired, just a couple of times slightly weary, but slightly…there were heavy backpacks, a few books to read, such as The great American novel by P. Roth, Animal Farm by Orwell, Arturo Bandini’s saga, John Fante’s and then my writings.

There were the nights spent talking about alpinism, from Boardman and Tasker and so on, 14 days for us, three months for them, I’m such a duffer, I came already back shattered from this trip. In the end there was a route which I can claim as extreme, we left this place that we couldn’t stand it anymore, but now we’ll talk about that on magazines and in the lectures, but the truth is that we couldn’t bear it anymore, not even the guy which never stopped, and myself, totally exhausted, even less. 80 kilometers by foot in 13 days, and thousands meters of uphill, a lot of jumaring, a 7b and a few 7as. There was a jumar which opened with 400 meters of void below, there were about ten times where I should have been faster, about a hundred times where I had wished to be stronger. In short a great route, I look back to the pictures and say that it is a great route, however, I won’t go back there again.

It worth noting that the route lies always between the 4100 and 4600 meters above the sea level and required to the three climbers eight days of staying on the wall. The climbing style of “Qui io vado ancora” is mainly technical face climbing on very compact granit and with “long runouts between the anchors”; as Fabio Palma says only in the last three pitches the line follows a system of cracks “with a fantastic final 6c+ length, more than 40 meters of crack at 4600 meters and with a breathtaking scenery”.

This new route is part of a project which is called “Liberi in Libera” (“Free (people) in free climbing”) a sort of explorative journey within the climbing world, which has been launched for the 60th anniversary of Ragni di Lecco and which involves about 10 members of the group climbing on big walls all over the world in search for exploration and adventure on new walls and in search of routes to open or discover. Therefore “Qui io vado ancora” is just a further piece of this puzzle which comprehends also “Le berbere et la gazelle” opened in Todra Gorges (Morocco) by Simone Pedeferri, Marco Vago and Cesare Bugada, and “E non la vogliono capire” by Fabio Palma, Matteo Della Bordella and Domenico Soldatini on Monte Ginnircu in the Supramonte region (Sardinia) and eventually “Il mio nome è nessuno” on Precipizio di Strem in Bodengo valley opened by Marco Vago and Simone Pedeferri, subsequently redpointed by Simone.

Here we present a fresh report by Fabio Palma about “Qui io vado ancora”, where he adds a note on the opening style, which reprehends the Rolando Larcher’s considerations after his recent first rotpunkt and on-sight of “E non la vogliono capire”… And in our opinion, this is part of the game and of the “growth” from different point of views.

Rurec is a valley where the yellow daisies had to renounce to their stem for standing in the wind which two 6000m peaks were reversing on them, with sensational stars shining, and with the cold that forces you to go in the tent already at 7 pm and where the granit didn’t collapse into cracks, leaving in some points some 6c moves on bunches of grass.

Keeping Simone’s rhythm, which opens for himself, is hard. He is opening just like it seems fair to me and like it is normal for Matteo Della Bordella, which Simone mentions a couple of times after some exposed starts from the belays.

It’s a route with many slabs and very long run-outs; it’s going to be liked by alpinists who love climbing on the pure rock, but not by people who only accept a controlled risk. The leaders will have to hurry up because before 11 am it’s too cold and for them climbing onsight will mean also don’t look behind, while the seconds will enjoy a pleasant and varied climbing (but only the first climbs onsight!).

In the evening we talked about Boardman and Tasker, Simpson, Jason Smith e Henry Barber, De Donà, Manolo and ours Della Bordella and Selva, which here would have better teamed up with Simone “the beast”. All “bad guys” so we thought about “Here I go again”, QUI IO VADO ANCORA, and we dedicate them this route which does not have the isolation of Baffin Island, the beauty of Trango or Siguniang, the wind of Patagonia but….a bit of everything!

QUI IO VADO ANCORA (Here I go again), 540 meters, 15 pitches, 7c max and A1, 7a mandatory. The grades might be very influenced by the altitude, from one day to the other, a pitch which I graded 6c it felt like 7a+!! Among us, Simone is the only one which had never been affected by the high altitude factor.

A rack of cams up to 4.5 is required; some of the pegs are still on the route (we hope that for our respect no more pegs are placed). Bring the hammer, because here when it’s cold it’s icy and the pegs could move and pop out. The start is at 4100m, the end at 4600m. We spent 8 days on the wall to open the route.

The route has been opened by Simone Pedeferri, Fabio Palma and Andrea Pavan. It offers a technical face climbing up to the 12th pitch, with some long run outs between the anchors. The last three pitches follow a system of cracks, with a fantastic final 6c+ length, more than 40 meters of crack climbing, size 4.5 cam, at 4600 m of altitude and with a breathtaking scenery. The detailed topo will be published on the next number of the magazine “Stile Alpino” and on the Ragni di Lecco’s website. For the ones of you which are leaving for Peru and want to try a repetition within the next 8 weeks, just write to stilealpino@ragnilecco.com

Note: A former 2 days attempt of opening a route in Alpine style on another wall failed – after a bivy at 4550 meters – at 4750 meters of altitude because of the walls with no cracks or features and lack of appropriate equipment for staying 4 nights on the wall.

You can find a resume in Alpinist