“To let it go far, let even the rain in his shoes be sweet, even the solitude” 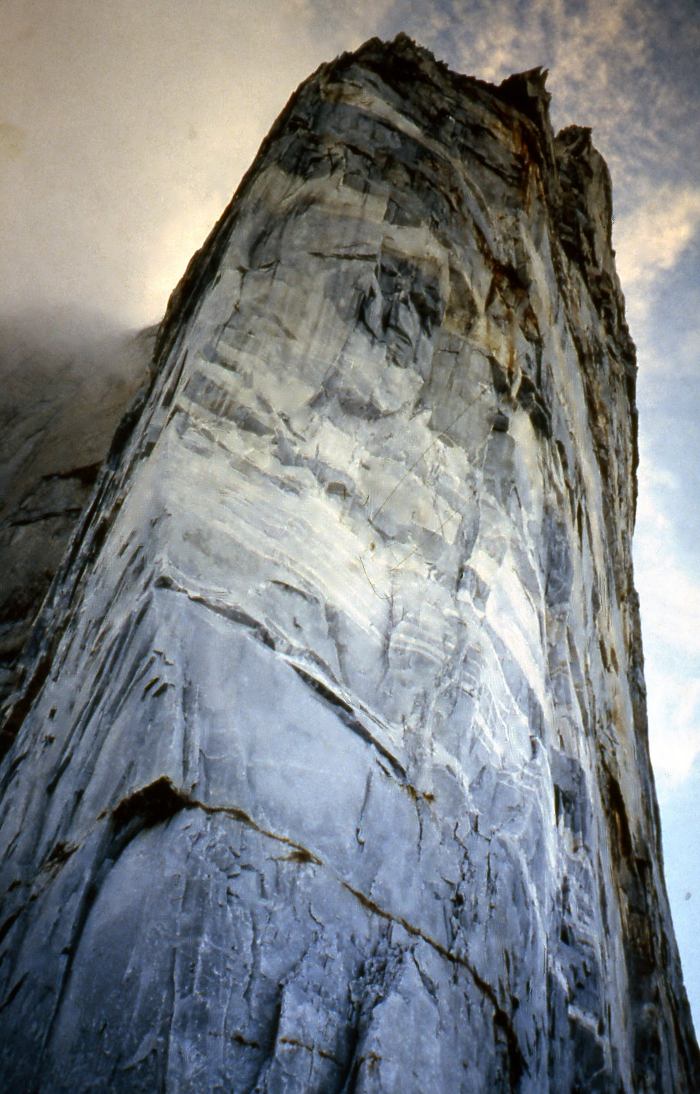 We’re enjoying our last meal made of asado and cannelloni in Estancia Cristina, when the words of Francesco De Gregori’s song come back to my mind.

Only now, four days after the ascent, I realize that I’ve gone really far.

In the last moments of our adventure my mind was always empty, without thoughts, without emotions: like a blank white sheet.

Due to the fatigue and to the physical conditions, I still hadn’t figure out of having reached the summit: I just wanted to rest, to release all the stress of the previous days.

Suddenly, after having satisfied the needs of my stomach, I see again, like in a movie, all the events of our long Patagonian stay; about two months and a half have passed by since we left Lecco!

I remember the first time when, with Casimiro and Paolo, we climb the first 400 meters of the wall, with medium range difficulties.

I climb second and I’ve a hard time in taking out the pegs from the huge granite flakes, because the handle of my hammer is half broken and it is without the hole for making a chain with carabiners.

I cannot even hang on the rope since I’m without the harness, which is stashed with all the gear from the previous day at the base of the wall, left of our north east edge.

Our first idea was, in fact, to climb in the center of the East wall, to be more sheltered from the Western winds.

The poor quality of the rock encountered the previous day, led us to look for another possible line more on the right, on the arête.

In order to take the most of the advantage from the good weather, very rare in these areas, we climb up with a few gear left from the previous expeditions of Ragni group.

I had already tried to climb without a harness and with boots, also on harder stuff. But this time I feel a sense of insecurity, of fear which I can hardly control: maybe it’s the first impact with Patagonia, or better, with extra – European alpinism.

The great amount of mountain books which I read influences me too much!

But my indecision disappears at the sight of the second tower, which we decide to dedicate to our friend Benvenuto Laritti (Ben).

I’m now psyched again, I rediscover the desire of climbing which I had the previous days when we were stuck in Calafate and we couldn’t cross Lago Argentino because of a ferry’s breakdown. So much suffering during those days of forced rest with the good weather!

I’m astonished by the steepness of the granite which reminds me the Grand Capucin: it’s impressive, but awesome at the same time.

By now we’re totally charmed by Ben Tower, we ought to climb it in search of the happiness that it has stolen us since its first sight.

The following day we’ll bring the gear up on the arête. But the weather breaks down all our plans.

In Patagonia you can forget about your plans; the only way is living every single day and wake up in the morning hoping that the new day is the crucial one, the one you’ve been waiting for such a long time.

But this is a dream that spoils your psyche, because each day of bad weather is a day less you have: your chances decrease and at the same time the desire of reaching the summit increases.

All the sacrifices made and the money spent makes the stakes of the game rising up.

The past is a strong stimulus for the present.

Spending many days in an ice cave doing nothing, you realize that the wait is always better than the reality.

The desire of escaping the reality for going back to the normal life has been the spring which pushed me, in our last attempt, to be always faster and always more resolute in my actions in order to return to Estancia Cristina.

The very same desire which I feel, that 10th of February, when we decide to give up our ascent and once we get on the glacier, the sun starts shining and the clouds start to thin out.

Casimiro suggests stopping and letting dry all the equipment and see how the weather looks: he wants to try a last chance.

I let myself convinced, but I don’t believe anymore: by now the weather has been kidding us too many times. I already believed that I was going to sleep in the dry Pascal hut: the paradise can still wait for a few days!

After an hour I start to regain some confidence; a sentence from Reinhard Karl, a German alpinist, comes back to my mind: “the way to the valley goes through the summit”. I hope he’s right!

At noon, we’re once again at the base of Ben Tower. It’s the sixth time I climb up to here.

With Paolo we equip the third pitch on the Tower, I see the strongly overhanging wall above me and think of Paolo’s effort in hammering the pegs. Luckily I didn’t have to lead this pitch.

I realize to be really out of the world: who knows how many things happened in these long months of solitude which we don’t notice and maybe we’ll never notice.

Lost in my thoughts I don’t realize that times fly: it’s already 20.30 when Paolo gets to a belay station.

I also have to go up, to take out the most of pegs and fix the rope to some others, leaving it tight so that it doesn’t stretch when we jumar up.

I try to be quick because the first two ropes, which are hit by the water drops from the top of the tower, are already iced. Shortly all the wall will be covered by verglas.

In the hurry we cannot fix the ropes properly. I realize it the following day, when, with the heavy backpack, I try to jumar up the rope which we had half fixed the previous day.

I start leading from the last belay and climb the diagonal crack just above us.

I go up placing cams and stoppers until the crack becomes very thin and forces me to traverse right on some loose flakes.

Casimiro is worried: I’m climbing 30 meters just above his head in a quite dangerous section.

I feel psyched for the beauty of the route; especially considering that only one hour before I thought to be slower than my two partners.

It was just a stupid thing that was persecuting me since the first day. Finally I realize to be an extreme climber as well.

Not much is missing to get out of the pillar and we haul part of the gear.

I have to climb down for a while to join the remaining parts of the ropes.

When I haul the bag I’m scared by its movements in the air, it goes about 30 meters far from the wall.

The following day, after a bivy at the summit of the tower, the wind had increased and we lose some time hauling up the rest of the gear. The backpack keeps on stucking.

Finally in the afternoon we start back to climb up: the weather is getting worse and in the evening we get to the summit of the following tower.

Luckily we manage to find a quite comfy bivy spot. It’s going to be the last dry one!

In fact, the following day the weather is bad and in the evening we’re forced to dig a small terrace in the ice to sit and spend the night, on the final 70/80° ice field below the summit.

Now we’re almost close to the summit: there will be 200 meters left. We’re all wet and we can’t pitch the tent: we just slip into it looking for a shelter from the rain and the wind.

I had never bivyed in these conditions. The following day, in the bad weather, we reach the summit.

I’m unscrewing a peg out of the ice when I hear Casimiro shouting that he glimpses the summit.

I have a huge desire of getting to the top, thus I leave there the pegs which I don’t manage to take out.

Eventually I figure out I got on a small ledge of a few meters in the middle of a Patagonia storm!

I hadn’t imagined a summit like this one: I believed it was nicer.

I just want to go down! Casimiro gives me a hug and Paolo shakes my hands.

I had already lived moments like this one and I was so excited to remain speechless for a few seconds.

Now, the fact of being on the summit of such an adverse mountain doesn’t produce inside me any feeling or emotion.

In that moment I think that’s due to the fatigue, the terrible weather conditions and the difficulties we still have to face.

The descent deserves some further troubles; we’re confident to go down from the normal route on the glacier and not from the wall, but the storm doesn’t allow us to do it. After a bivy in a crevasse close to the summit and half day wandering around in the storm with no visibility, we’re forced to descent from the route we climbed.

We’ve a single rope, a rope which is damaged by a crampon, another 30 meters rope and a little gear. We will equip the last abseils hammering the metal bars of the etriers as if they were pegs!!!

We make a further bivy on the wall and when we’re still on the Upsala glacier we decide to go back to Pascal hut.

It’s 6 pm and it’s 12 hours since we left the last bivy. Food and gas are over since more than a day and we try to kill the thirst by drinking snow and nuts for the soup.

I’m so exhausted that I’m not worried about anything; six days on the wall totally drained all my energies.

The weather keeps on being bad: rain and strong wind.

I’m forced to stand also under the last Patagonian shower!!!

Cerro Murallon (2885 msl) is a mountain that lies on the Upsala Glacier, Patagonia, on the border between Argentina and Chile.

The shape of the mountain recalls Marmolada, as on the Argentinian side stands a big rock face, about 1200m high, while on the Chilean side the glacier goes until the summit.

In 1961 the English guides Eric Shipton and Jack Ewer together with their clients Eduardo Garcia and Cedomir Marangunic, while crossing the Hielo Patagonico Sur reach the West summit, then in the middle of a storm keep on climbing without understanding if they manage to arrive to the East summit, which is the main one.