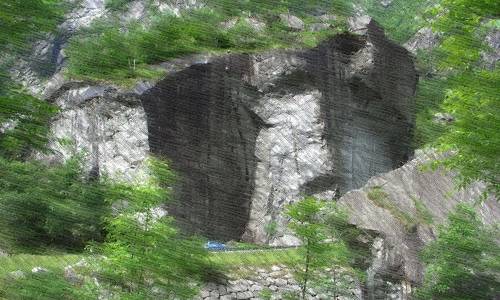 As usually for Simone Pedeferri this spring began with the preparation of the Melloblocco (he’s the boulder setter), then he moved to sport climbing and after some warm-up pitches, thanks also to the great grip of May he succeded in the first repetion of “La valle dei sogni” (the valley of dreams); a pitch redpointed just a few weeks before by Sergej Shaferov at Sasso Remenno. This is Simone’s report:

There are some moments when friendship let you feel really deep emotions. These situations could give you the power to realize unexpected performances.

Firstly, the good state of shape reached through the preparation of Melloblocco, led me to send “Dark Moon”, 8b+ in Cevio, at the second try, while before I had climbed “Boulder line” 8b+ in Valbrona, bolted by the friend Neno; I had desired to climb that route for many years, because I remembered the times when Neno equipped and began trying it. It’s a futuristic line for those times since it requires both bouldering and sport climbing skills.

Then, on Sasso Remenno, with Isma, we clean one of his projects, and he gives me the chance to do the first ascent, a real present from a friend. “La prua” (the prow) is one of the finest lines of Remenno, with a grade of 8b+.

But the best thing which happened to me was to belay Sergey during his attempts to “la valle dei sogni”, a route born from the link of “Mirò” and “Vibrazioni squilibrate”.

It’s many years since this White Russian guy has become a great climber and gives me a strong stimulus to improve, we shared together fantastic days on the rock and hard trainings; those memories are part of my vertical mind, which I always try to fill.

The day when Sergej sent the route I was on the opposite end of the rope, really happy of having belayed him on such a hard route, as if I was a little part of his result and I was super proud of what he had done. Maybe that was the moment which gave me the right mindset to climb that route, Sergej’s happiness when I lowered him down from “la valle dei sogni” has been the key motivation that led me to repeat it. My dear friend proposed 8c+/9a for this route!