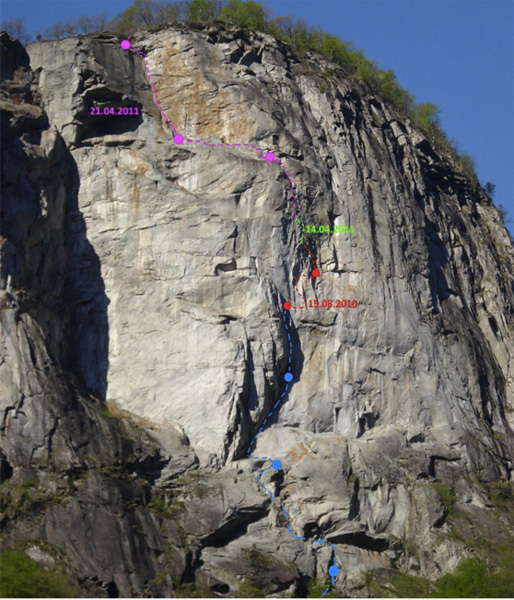 Matteo Della Bordella has freed the route “Il mito della Caverna” (8a max, 7c oblig, 300m) in Val Bavona, Switzerland. This route was opened with Luca Auguadri after starting off with Nicola Balestra.

The Gramused gendarme is one of the gems in the narrow Bavona valley in Switzerland, and recently a difficult multi-pitch route has been added to it, “Il mito della Caverna”. The route climbs up the central part of the face, firstly overcoming the evident and initial dihedral, tackling the central overhang directly, to then continue along the evident and marked yellow dihedral all the way to the summit. The route was established by Nicola Balestra up to the fourth pitch, and then completed by Matteo Della Bordella and Luca Auguadri in April of this year. On 12 June Matteo made the first free ascent, with difficulties up to 8a and an obligatory 7c, while Luca repeated it two days later.

Della Bordella describes the ascent as “quite atypical for a granite face, the harder pitches are on an overhanging wall and on slopers; a “modern” style climb similar to the nearby Cevio crag, so much so that at the beginning of the second pitch and at the end of the sixth, the rock never gets wet. This route which brings together alpine characteristics with sports climbing, is highly recommended! Thanks to Luca for including me in this project and I congratulate him for having established the hardest sections.”

Matteo Della Bordella points out “Establishing this route was very difficult: by completely avoiding the use of aid and bolts to progress (A0) meant that the rock dictated its rules, testing us with its moves which were difficult to interpret and extremely difficult. Every single metre was lived to its fullest, giving us great emotions which I hope will be passed on, intact, to future repeaters!”