Matteo Della Bordella and Arianna Colliard and the ascent of the Lecco route up the SE Face of Grand Capucin, put up in 1968 by the Ragni di Lecco climbers Aldo Anghileri, Guerino Cariboni, Casimiro Ferrari, Carlo Mauri and Pino Negri. A story to remember a great route up the superb granite obelisk that hosts important chapters in the history of alpinism, not only in the Mont Blanc massif. 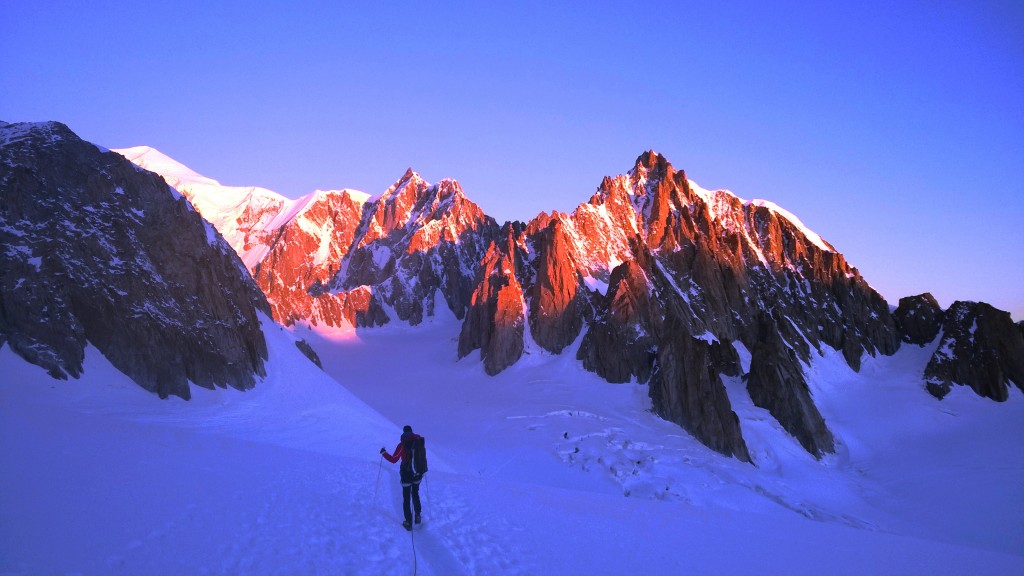 Some peaks, some faces are symbols. The Grand Capucin, that sheer missile of rock opposite Mont Blanc, is one of these. Where its appeal lies is an almost rhetorical quest. Who for instance cannot remember the very first time they saw it? Maybe at dawn or dusk when, with his monk-like profile (hence the name), it suddenly emerges, standing brightly out from the rest of the – always beautiful – other Tacul satellites. One might argue that it’s easy to fall in love with Capucin. This has certainly been the case for many alpinists, starting with Walter Bonatti who, together with Luciano Ghigo, carried out the first ascent of this impossible granite tower back in 1951. Since then the Grand Capucin has witnessed countless climbs, stories and alpinists – all the world’s best – including the first ascent of the Lecco route on behalf of a handful of climbers who left their mark on their backyard mountains and in the history of the Ragni di Lecco: Aldo Anghileri, Guerino Cariboni, Casimiro Ferrari, Carlo Mauri and Pino Negri. This is why we’ve enjoyed the recent “reinterpretation” by Matteo Della Bordella (who, as everyone knows, is one of the leading lights of this Italian mountaineering club) and Arianna Colliard. Della Bordella obviously free climbed the beautiful, large third splitter pitch that weighs in at 8a+ and had been freed in 2011 by Nicolas Potard as he combined a series of routes he later called Le tresor de Romain. But this detail seems far less important than all the rest because, as Della Bordella states, “whoever climbs this route has great memories and a superb story to share.”

THEN AND NOW: THE “LECCO” ROUTE ON GRAND CAPUCIN
by Matteo Della Bordella

The “Lecco” route was only the fifth route to be established on Grand Capucin. It’s a line with a important history: a history comprised of big names, alpinists I’ve always admired because of their ascents and their way of taking to the mountains. Aldo Anghileri, the only member of the 5-strong group still alive today, told me some details about their climb. 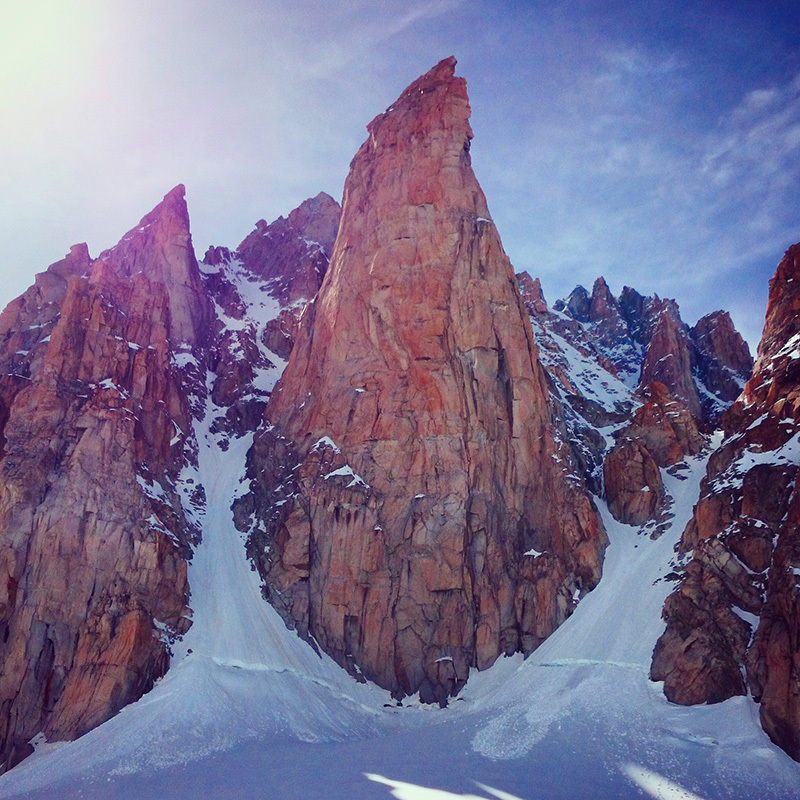 After repeating the Bonatti route it was Aldo who came up with the idea of forging a line up the large corner in the centre of the wall. Aldo shared his thoughts with Casimiro Ferrari who immediately jumped on the idea.

On the first day Aldo Anghileri and Pino Negri climbed the first 4 pitches and bivied at the base of the large corner. At this point they discovered that the line they had thought of had already been attempted by others, although via a different route on the lower section; they came across pegs and wooden wedges left behind the previous year by a Swiss party. 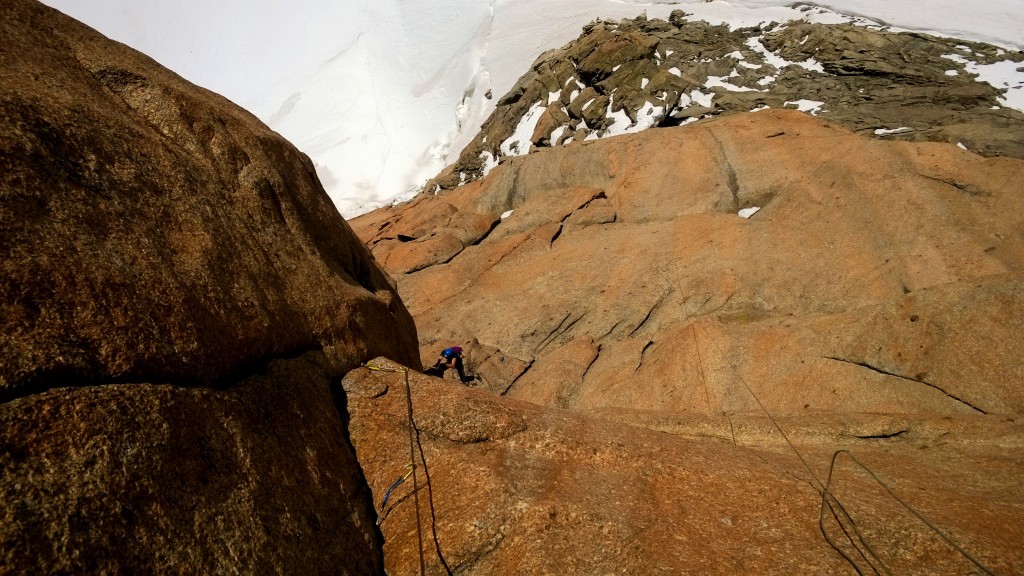 The day two they were joined by Casimiro Ferrari (who had started later due to work commitments), Carlo Mauri and Guerino Cariboni. The teams worked independently and all members climbed as in those days jumars or fixed ropes weren’t used.

After having climbed another 150 metres and made a second bivy, on day three the five reached the most difficult section of the route. Here the Swiss had left a series of rivets on a smooth slab; not knowing how to use them, the Lecco climbers tied their shoelaces around them and hung off them to breach this section! From here they continued on to the summit, which they reached later that evening.

As I climbed this route a few weeks ago I couldn’t help but think about how different the 1968 ascent was from ours today. For me climbing the Ragni route on Grand Capucin represented a free climbing challenge, in those days it represented an adventure, it was all about climbing a mountain, alpinism in its truest terms. Equipment has changed, the way we climb has changed, nowadays we have climbing shoes, friends, equipped belays and the odd bolt along the pitches; 45 years ago there were only hobnailed boots, wooden wedges, pegs and rivets!

Luckily though this mountain, this rock, this line with its cracks and corners, are exactly the same as they were in 1968 and they are fantastic. Capable of providing great moments of excitement today, just like yesterday, to all those who wish to give it a go.

What Arianna and I experienced was completely different from that of first ascentionists: this was my third time on Capucin this year, to climb this route free, and one pitch had really cast a spell on me: the third. This section, freed in 2011 by Nicolas Potard during his “Le tresor de Romain” enchainment is, according to some experts, one of the finest cracks in the entire Mont Blanc massif; an 8a+ that requires pure power in its first section, comprised of long reaches and deep lock-offs on distant holds and finger-locks, followed by a splendid, less difficult second section up a thin hand crack. 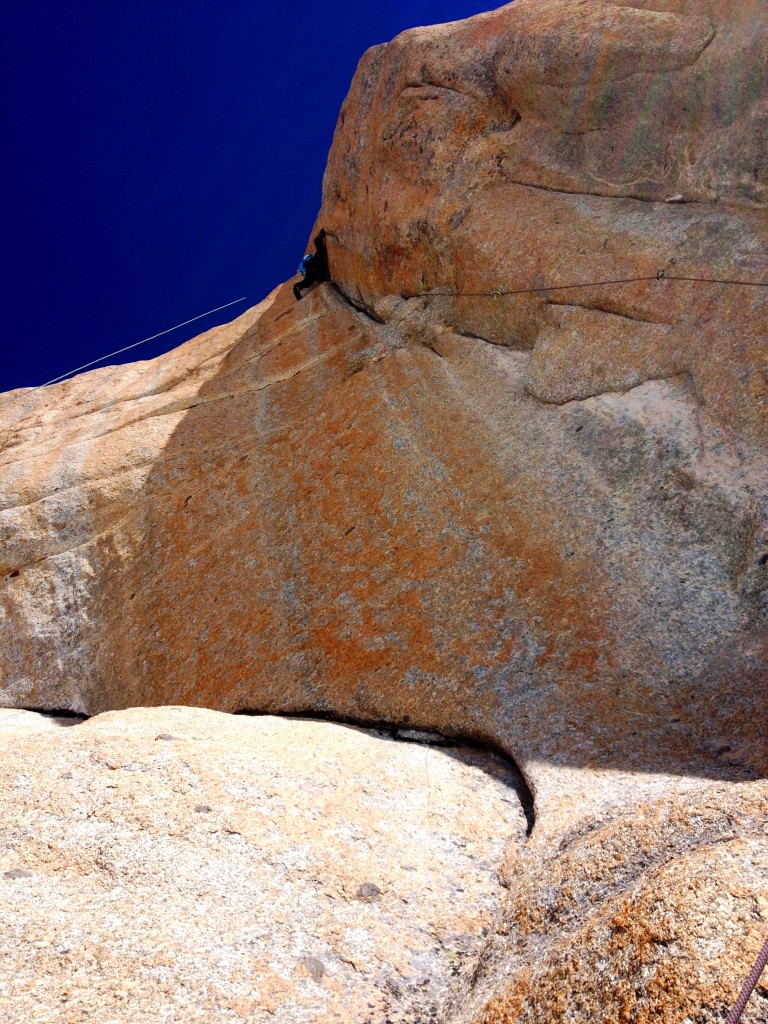 I was able to figure it out in 7/8 attempts, with an difficult physical and psychological battle against the lower section.. From here we continued to the large corner, past the section of the rivets to then continue to the summit, past exciting crack and slabs always in the region of 6c/7a.

Aldo and his climbing partners enjoyed the satisfaction of establishing a new route, I enjoyed climbing it free with Arianna, while Arianna savoured reaching the summit of Capucin with me… and for the others, who knows! One thing is certain: whoever climbs this route has great memories and a superb story to share.

The great thing about going to the mountains and climbing routes like these is perhaps that everyone can choose their own goals and get plenty of satisfaction. 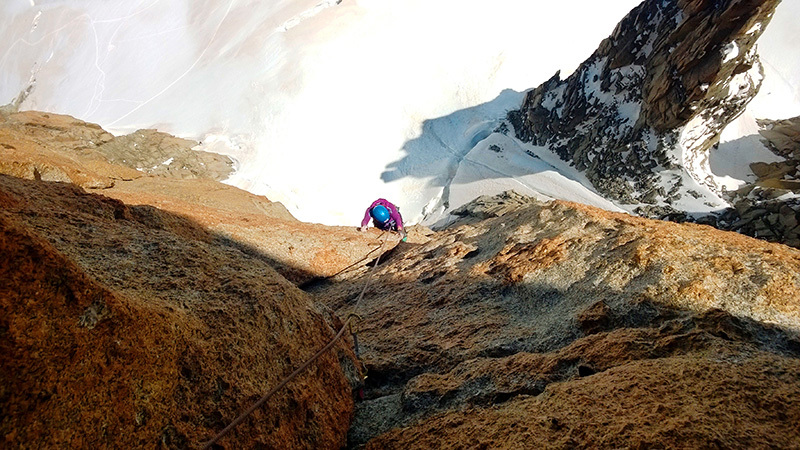