The report by Matteo della Bordella about his recent free ascent, together with David Bacci, of Freerider, the famous climb freed by Alexander and Thomas Huber on El Capitan, Yosemite.

Yosemite is and always will be Yosemite. Were this to be necessary, then confirmation comes from Italian climber Matteo della Bordella who together with David Bacci repeated Freerider on 19 and 20 October. This famous route was freed in 1998 by the German brother Thomas and Alexander Huber up “Mr” El Cap. It is worth noting that for Della Bordella and Bacci, this was their first trip to the climbing Eldorado, and it is worth remembering that for those who want to free climb El Capitan, Freerider is a highly prestigious, obligatory stop-off. A high class big wall which follows the world-famous The Salathé Wall and then way up high, on the exposed Headwall, it deviates and avoids the 8b pitch to continue independently for 4 pitches. This consequently translates into 1000m of 5.12d, or 7c which, it has to be said, on granite cracks can never be taken lightly… Della Bordella amd Bacci set off at dawn on 19 October and at the end of the day had already reached the bivy on El Cap Spire. And then, at 17:30 the next day, they reached the top of El Cap. All the rest is Yosemite, i.e. beauty made for climbing. 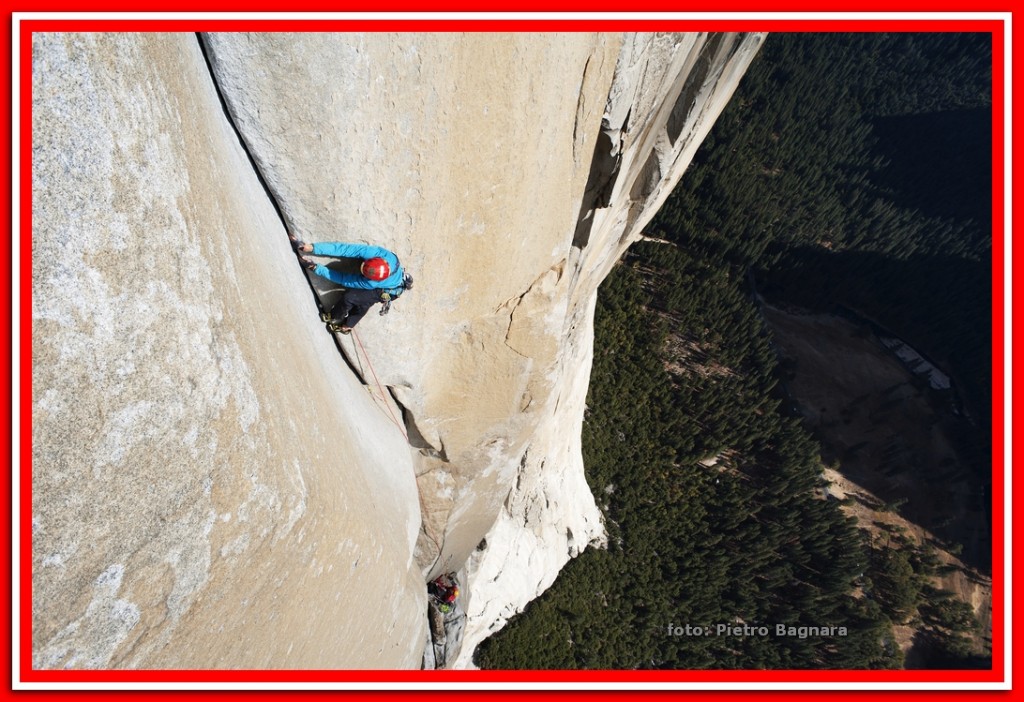 YOSEMITE IS THE PLACE
by Matteo della Bordella

When you first enter the valley you are immediately faced with El Capitan: a 1000m high granite monolith, steep and compact from start to finish and you simply cannot be awestruck by this gigantic wall and it is then that you begin to realise what lies in store.

I reckon many climbers dream of climbing El Capitan and I’d certainly dreamt about this for the last few years. In truth though not too many, the desire had come about, more or less, when I discovered something knew for me, namely crack climbing at Cadarese, but during the last 4 years I kept postponing a trip to this legendary valley for some reason or other. In retrospect I reckon it was probably a good thing that I didn’t come here immediately…. also because, in my dream I not only wanted to climb El Capitan, I also wanted to free climb it from start to finish!

The choice of route wasn’t that important but since I’d be there for the first time, the logical line was “Free Rider”, the easiest of all free climbs up El Capitan. Free Rider is basically a variation to the famous Salathè; established by the Huber brothers in 1998, it avoids the Salathè Headwall with a leftwards traverse and then follows a logical series of cracks. The easiest of which, despite its 7c grade, aren’t that easy after all.

In the beginning things didn’t go well for my climbing partner David Bacci and myself. Too many people on the route and our poor offwidth technique had hindered progress, grounding the first two attempts – the second of which didn’t even start due to too much traffic on the route.

The Monster Offwidth in particular proved particularly difficult and exhausting, but the Hollow Flake and Free Blast pitches weren’t to be underestimated either, not to mention the Enduro Corner and the finishing pitches, very physical and continuous. Even if the grades of these were fairly ridiculous, nothing could be taken for granted, on the contrary… But apart from all of this, the most nervous moment of the holiday was when we decided to bail from pitch 2 due to the aid climbers above us who wouldn’t let us overtake.
We decided to wait for 5 days to let the traffic ebb and to get to grips with this mix of anger and disappointment. Five days invested well by training on some offwidths. 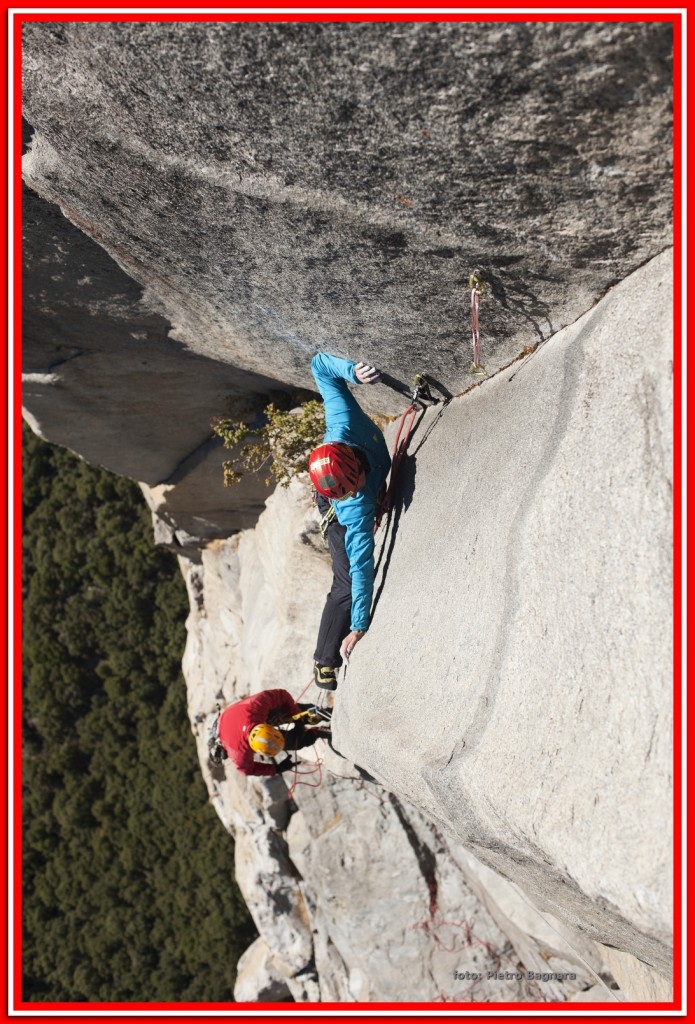 After a rest day we set off on our free attempt. We planned to climb the route in 3 days, so as to have enough margin to free some of the harder pitches if necessary, but at 17:30 the next day we already found ourselves on the summit. We mainly alternated leads, but I climbed all the hardest 5.12 and most 5.11 pitches. The crux Free Blast and Hollow Flake pitches seemed less stroppy than before, the Monster Offwidth didn’t provide any particular problems even if David led it and at 18.00 we reached the incredibly airy El Cap Spire bivy.

Things ran even more smoothly the next day and after sending Teflon Corner (on paper the hardest pitch of the route – a completely smooth corner which is climbed smearing the palms of your hands) I immediately sent the Enduro corner, which is absolutely no walkover for the grade, and also the traverse. The final pitches are demanding and pumpy but we encountered no further difficulties. This time there was hardly anyone en route. Or rather, just two teams who kindly let us overtake them, as well as a fast team attempting to free climb Capitan and Half Dome in 24 hours… we obviously stepped aside as they climbed past.

Well, I’ve climbed many routes and rock faces in recent years, some of which are certainly more difficult than Free rider, but reaching the top of El Capitan, climbing it all free, is definitely something different, special and unforgettable!

During the rest of our holiday we indulged in climbing Mount Watkins and The Nose up Capitan, plus we took a circa 60m fall from the summit of Capitan to finish in style. This is called Porch Swing and the experience was totally exciting and adrenalinic! 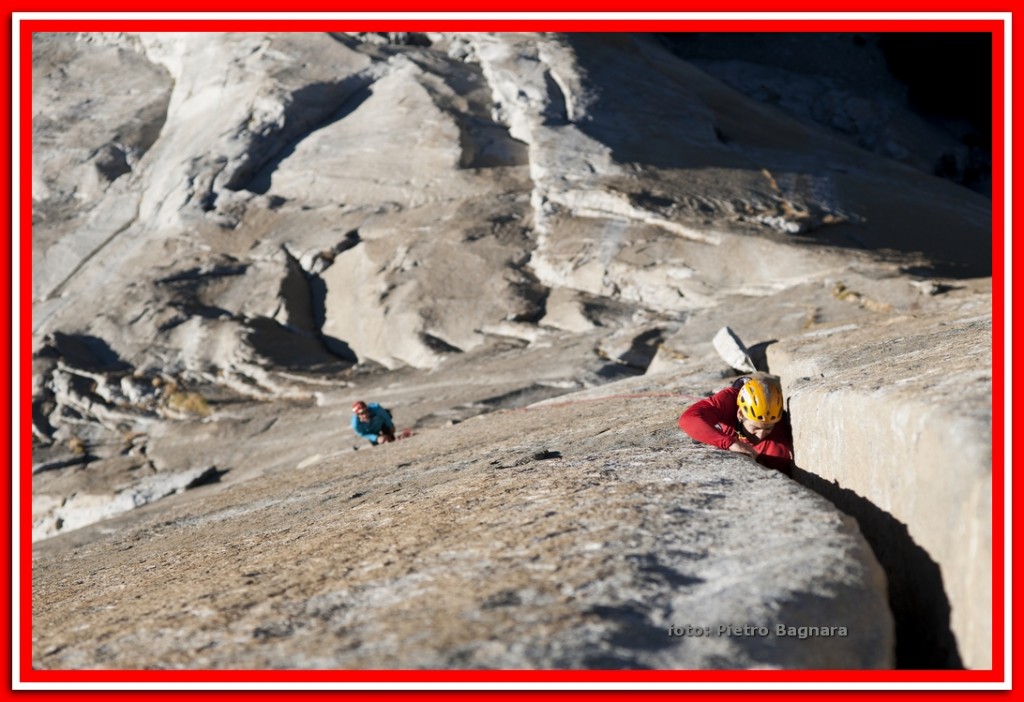 What else remains to be said?! I’m already thinking about other routes on Capitan that I’d like to climb free next time, as well as another, far longer free fall… (This second statement is completely untrue!!! For me Porch swing is a so wild I’ll only do it once in my life)