In September 2013 the Spiders Simone Pedeferri and Luca Schiera completed the free ascent of a route on the Precipizio degli Asteroidi taking over the line Savessimbebè , the way opened in 1986 by the brothers Lisignoli and Sergio Panzeri , with different traits in aid climbing .

Here is the story of the climb:

Semptember 2013. It rains and rains…in May and June it doesn’t seem to stop and the date on Luca’s ticket to Pakistan gets close and close. The plan of free climbing this line, the wildest one, on Precipizio degli Asteroidi East face, blows. Our idea is to follow a mysterious route which has never been repeated: “Savessimbebè”, opened by Lisignoli brothers and by Sergio Panzeri (we thank them for leaving us carte blanche) in 1986, the first route in this sector.

After a first reconnaissance at the end of May, on the initial part, escaped from the rain, we enjoy the quality of the route and we manage to open a 3 pitches variation, to avoid an ugly and grassy part. It looked to be a good adventure and we only needed two good days to finish our project…

But afterwards the game are closed, the weather is not with us. We had already imagined a perfect ascent, we knew the first part, but the rest was unknown and we had no idea if it was possible to free climb it or not. It was much more fun to try to free climb a route during more days without knowing the pitches. A pure style: you start and climb, trying to onsight as much as you can, maybe opening some variations where the route is too dirty, or maybe you’ve to clean the pitch, go back to the anchor and restart to free climb it. This was our idea.

Nothing done, Luca leaves for Pakistan and I go climbing on other walls.

At the end of September, eventually, we have two days of good weather and we can put our plan into action: we really had a lot of fun! Two nice days of “British” climbing, with some exciting moments. The first part was under a scorching sun, out feet were swollen for the heat and we were hanging on the fifth belay, waiting for the following pitch to go into the shade. Of course we didn’t wait enough, because our impatience and the desire to climb won. It ended up in a terrible fight between heat, slippery rock, and placing micro-nuts. The upper part indeed, offered us some cracks that we had to clean with the nut-cleaner, and put the usual micro-cams for protection, and some brittle rock.

In the middle we had a perfect bivy on a perfect ledge, with a meal of cous cous and noodles…unfortunately my partner is vegetarian: once I used to eat bread and sausage, but times change!

But maybe the best memory of this ascent is linked to the upper part, where we managed to climb onsight on not always perfect rock, with some spicy variations.

The result is a route without high grades, but with a character, which was exactly what we were looking for, a route where the adventure was the base for spending two days in the wilderness.

The end: the usual rappels in the dark, with only one headlamp, and a slow descent on a dirty path trying to light up each other, under a sky full of stars.

This is our adventure on Free Bebè: 18 pitches for 600 meters up to 7b. Because in the end each climber wishes to live as a free baby. 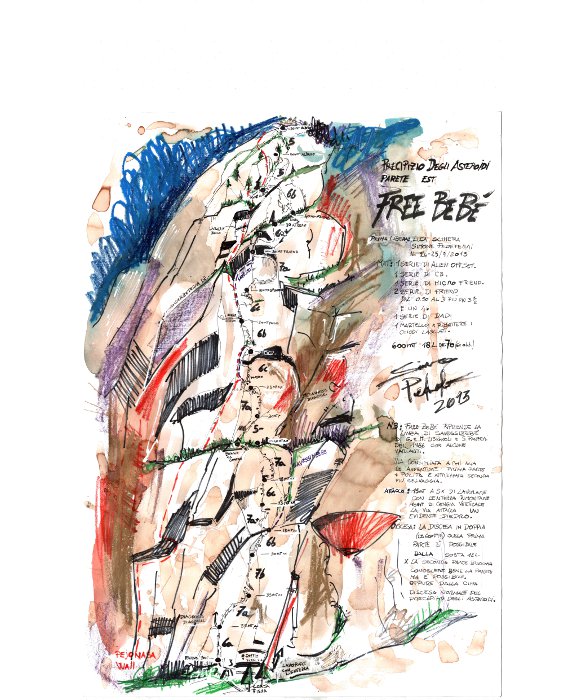