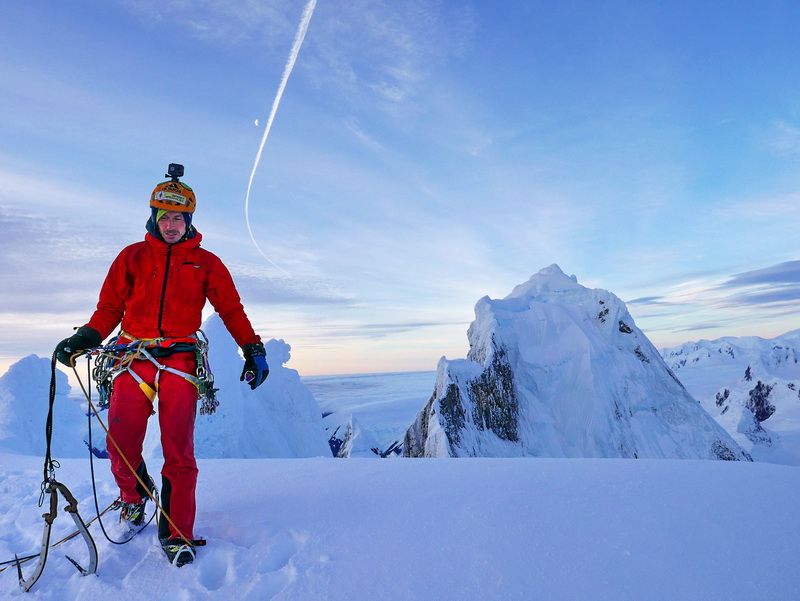 From February 9th to March 3rd 2018, we spent a total of 22 days in Chile’s O’Higgins National Park to climb the remote Riso Patron. This mysterious mountain on the western border of the southern ice field saw few climbers yet: The central summit (approx.2550m) was reached twice (1988 Ferrari&co, 2015 French expedition). The south summit (approx.2350m) was yet unclimbed. Riso Patron is hard to reach and exposed to the Patagonian weather. 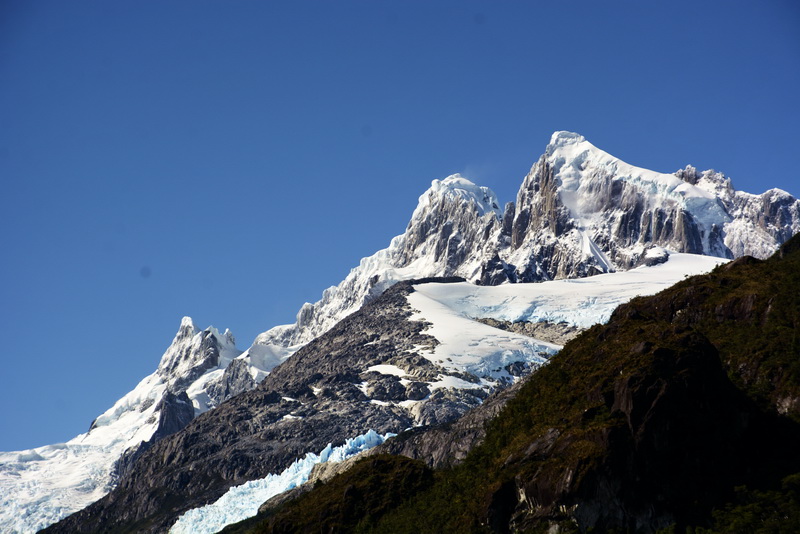 The style of our expedition was “by fair means” – we decided to reach the base camp in Fiordo Falcon by kayak which involved 100km from the Puerto Eden – the closest settlement. Once arrived in Puerto Eden, we spent a day visiting the offices of the authorities; getting the permission from Armada, Police and National Park turned out to be complicated and we missed a lawyer in our team. We finally started on February 10th and could finish the approach by kayak in three days – thanks to good conditions. 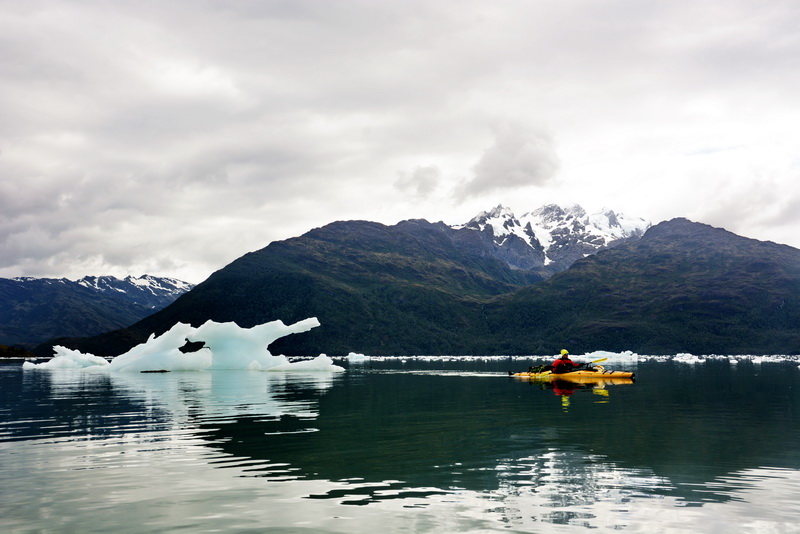 Once we reached the place of our base camp (known also as “Fonrouge bay”), we immediately noticed something was different than expected: instead of the usual forest, full of green plants and birds, what we had in front was a brown and grey field with broken trees, dead fishes and pieces of ice. Our only explanation was that a huge Tsunami had recently taken place in the area, destroying everything until 1 or 1.5 km far from the sea. 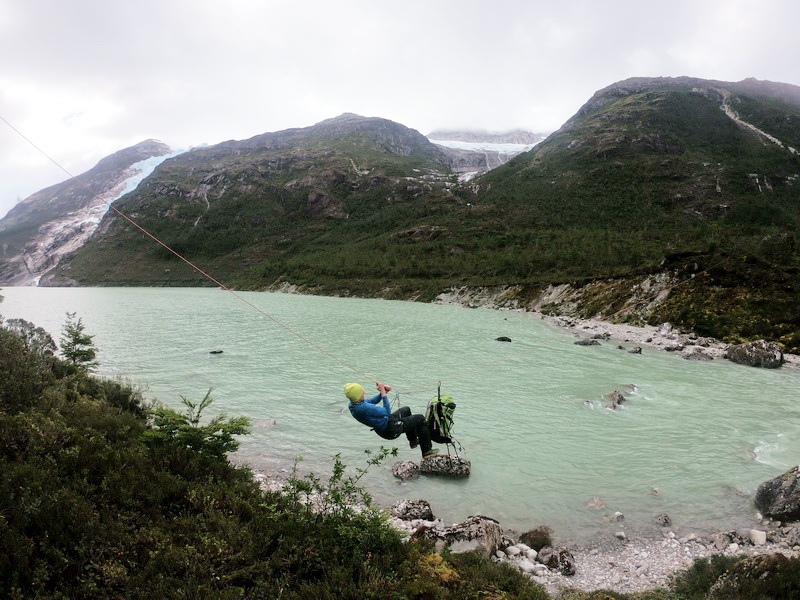 The day after our arrival we immediately started to explore the area (the so called “Comesana valley”). Reaching the advanced base camp and then the mountain was one of the many questions of the expedition. The approach we chose involved crossing a big river coming out of the lake. In order to be able to do that, one of us swam through the lake and we set up an acrobatic 80 meters tyrolian. Rubber boots turned out to be an essential elements for walking through swamps and rivers. 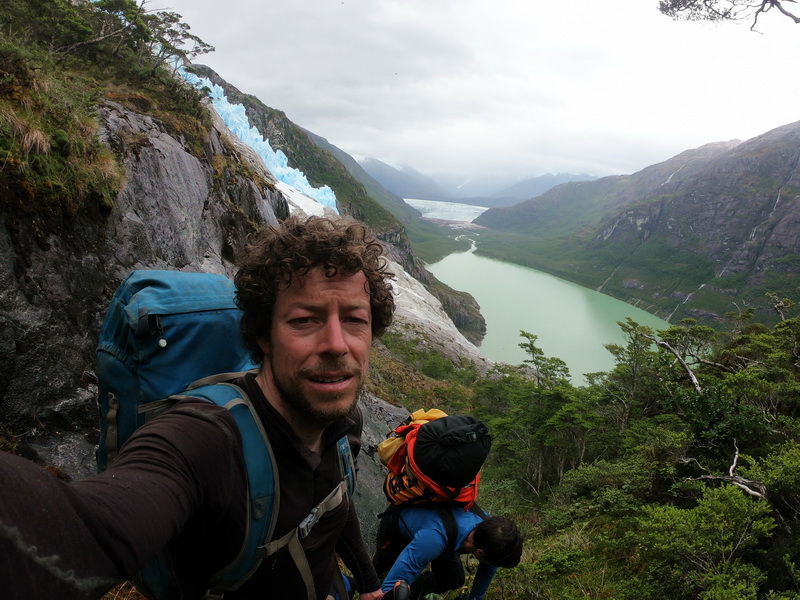 Eventually the 15th of February we positioned an advanced base camp, at approximately 1 hour and a half from the beginning of the wall. Everything was now ready we just needed some good weather to start the climb!

The lack of a clear weather window made us guessing about different strategies and routes. When we finally sat out the last storm in the ABC, a forecasted 1.5 day window ahead, it became clear, that the only reasonable line was the obvious ice ramp half way up the south/west face. Once the semi-dry gear was in our packs, the climbing finally began on February 23rd. Moderate mixed terrain including a few harder pitches led us to the ice ramp. 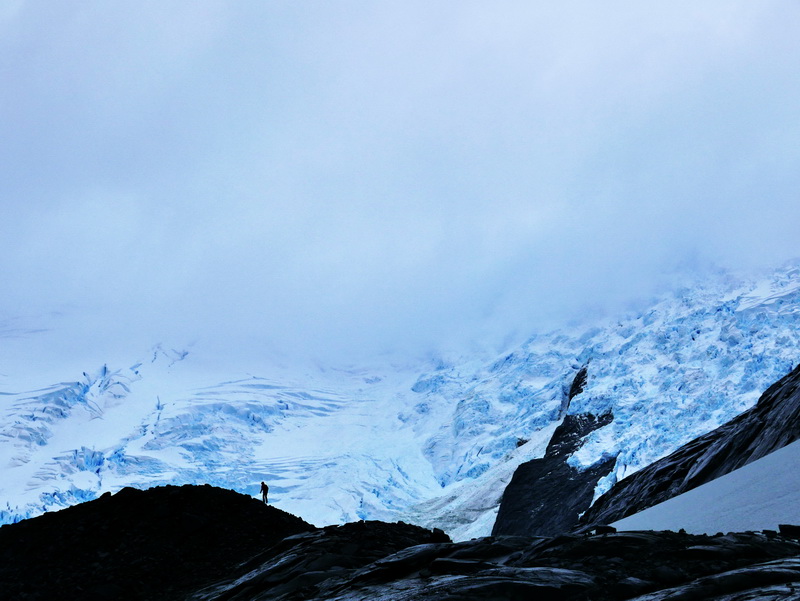 The ice turned out to be perfect and we could enjoy rime ice up to 90°. After 12 hours of climbing we enjoyed a breathtaking glimpse to the southern ice field at dusk from the summit. Happy for having reached this untouched summit, we felt overwhelmed while looking north: Our dream of completing the climb with traversing to the central summit vanished due to the shortness of the weather window and the obvious difficulties. After bivying in a cosy cave below the summit, we descended the south ridge and rappelled the west face. 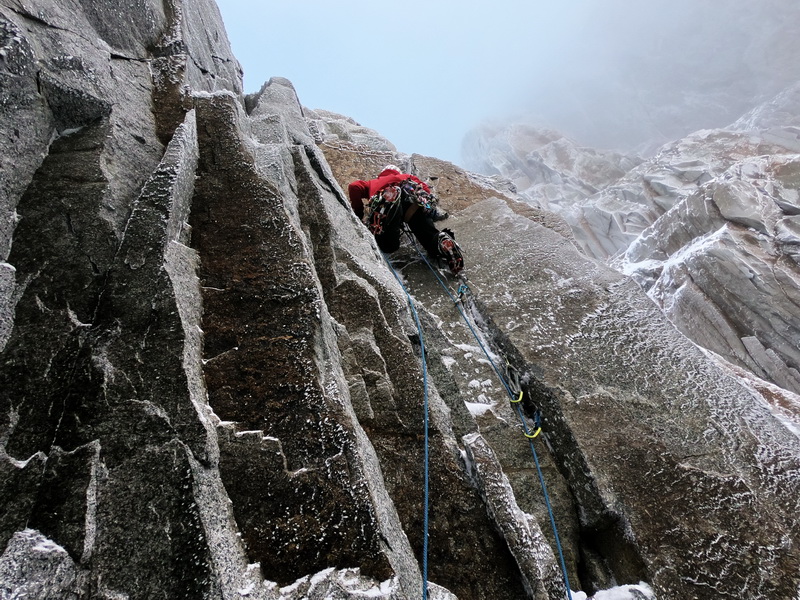 Safely back in the base camp, we would have liked to climb once more in this paradise, but the weather definitively turned bad. After spending another long day extracting all gear from the ABC, we started our way back in Kayaks, which included 5 days of fighting against strong gusts. 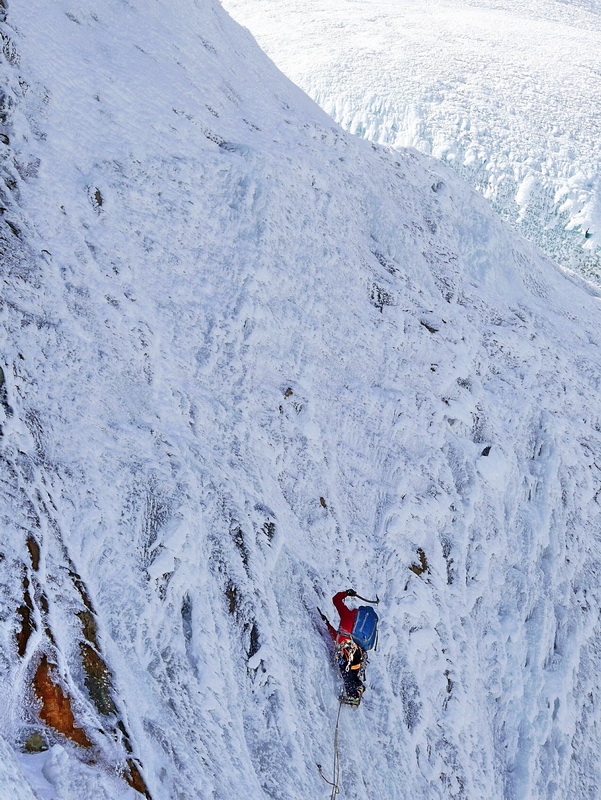 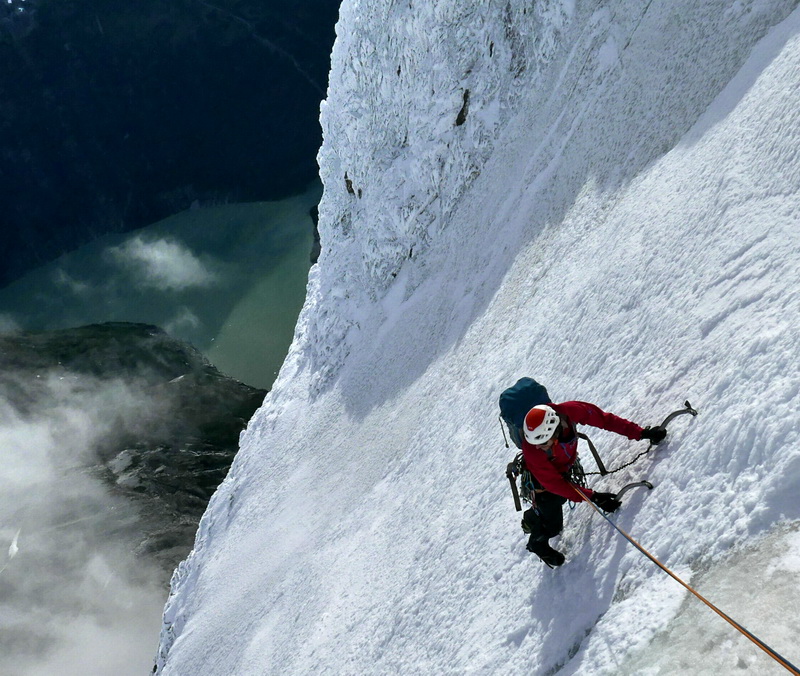 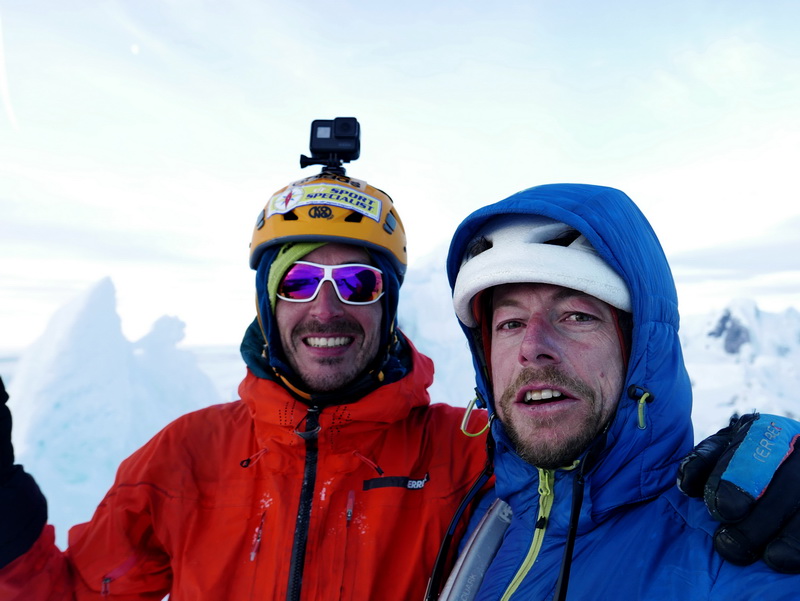 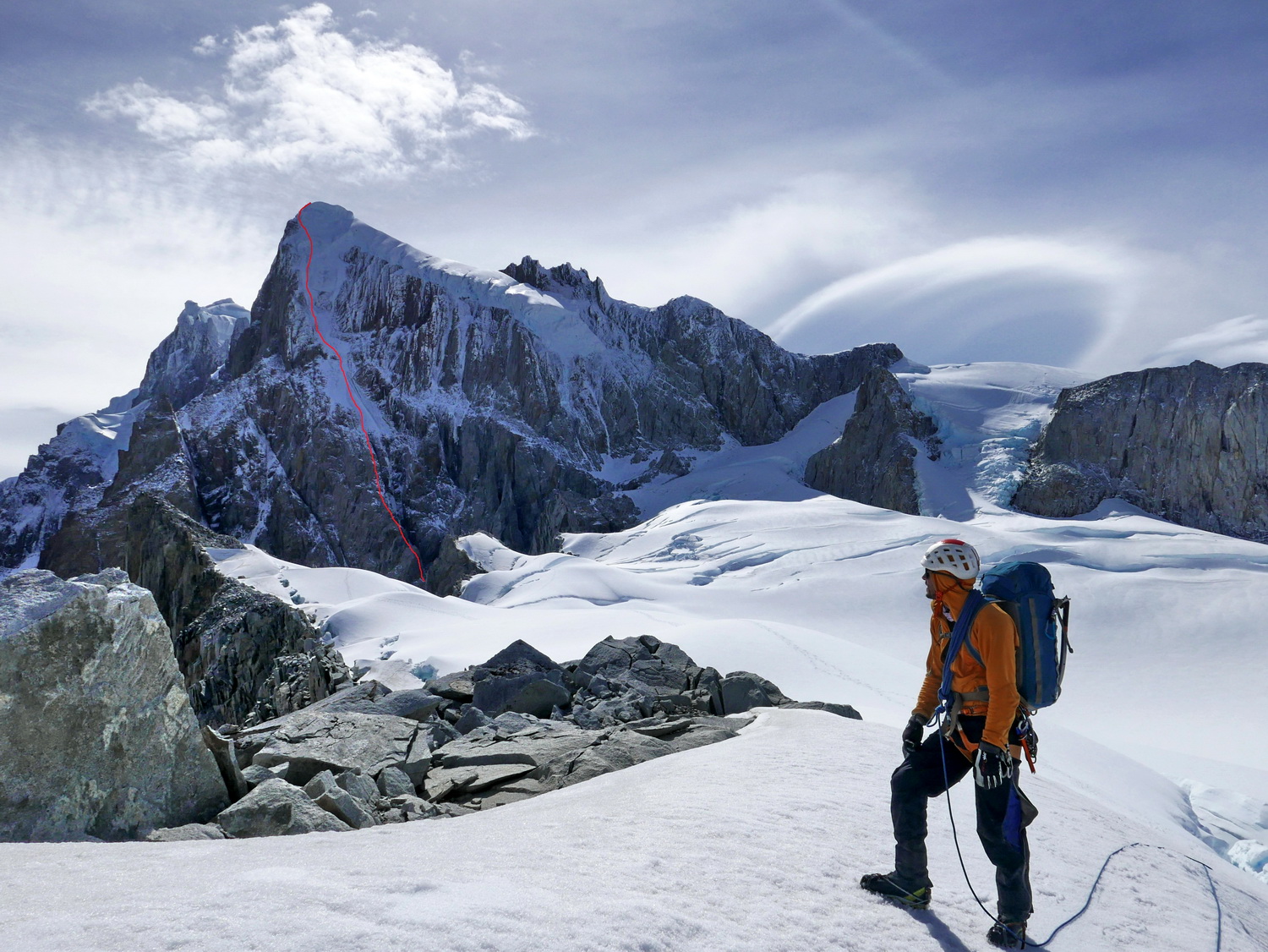 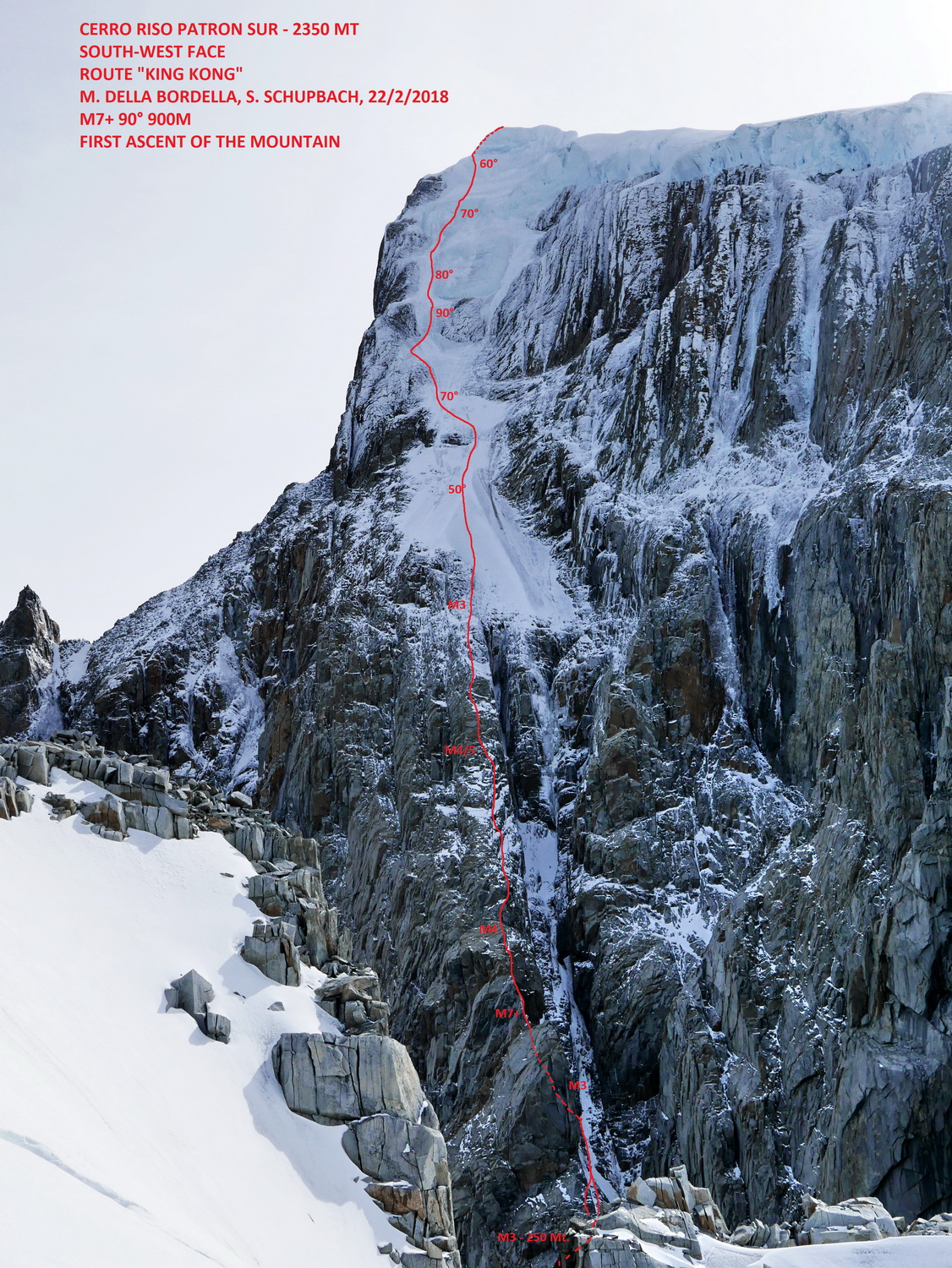