A great news just came from Simone Pedeferri, who is in Chile since the end of January: the first ascent of a new 900 meters route on one of the most beautiful big walls of that country, located in Cochamò valley, where Simone, back in 2005 had already opened the route “nunca mas mariscos”. Here is what Simone wrote: 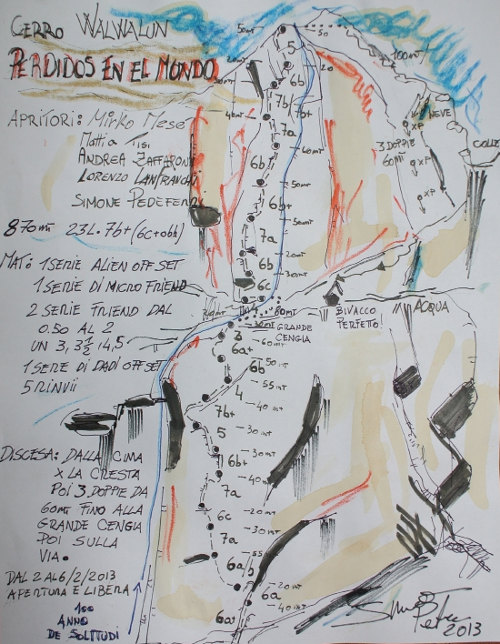 I was quite afraid of coming back to Cochamò 10 years after the first time, because in those places I had lived some of my best moments of exploring walls and I didn’t want to ruin that memory. As I entered in Cochamò valley I could already notice some changes. Like many areas it had radically changed since 10 years ago, similarly to the Alps and El Chalten. Several tourists were walking in the valley, the campground was now big and crowded and there was a hut with all the comforts.

All this made me a little nervous, when I remembered of such a wild place, but that’s the way it is! Since the beginning our idea was to open a new route in the Amphitheater valley on the Walvalun wall. Daniel, the American climber who manages the hut, tells us that the path has been improved, thus the approach is much faster. I immediately think that on a wall like this all the logical lines have been already opened and we have to change our plans. On January 31st, we bring, quite skeptically, the gear to the base of the wall and find out that in the reality on the Walvalun wall, the best wall in this valley, there are no other routes but the classic.

We look to the wall and imagine our line, a dreamers’ line; we go down and come back the day after with more gear, and start on the wall. From the 2nd to the 6th we will climb this wall, with a first part roaming around incredible slabs and vertical flakes, arriving then to a perfect ledge, where we will spend 2 bivys on the wall, and then continue for the second part on a red pillar which would make Grand Capucin jealous. In 5 days, with perfect style, we open the route and free climb all the pitches. All the five of us play and have fun in the wall, it was a fantastic experience getting to the top of this wall, enjoying the climb, in pure south-american style, relaxed and happy. I think this is really an exceptional line, a bigwall on free climb. I had never thought of realizing such a good route of almost 900 meters, 23 pitches, up to 7b+. PERDIDOS EN EL MUNDO. We go out of the valley with pouring rain, but it doesn’t matter because the dream of free climbing a big wall and our memory of Cochamò is safe.