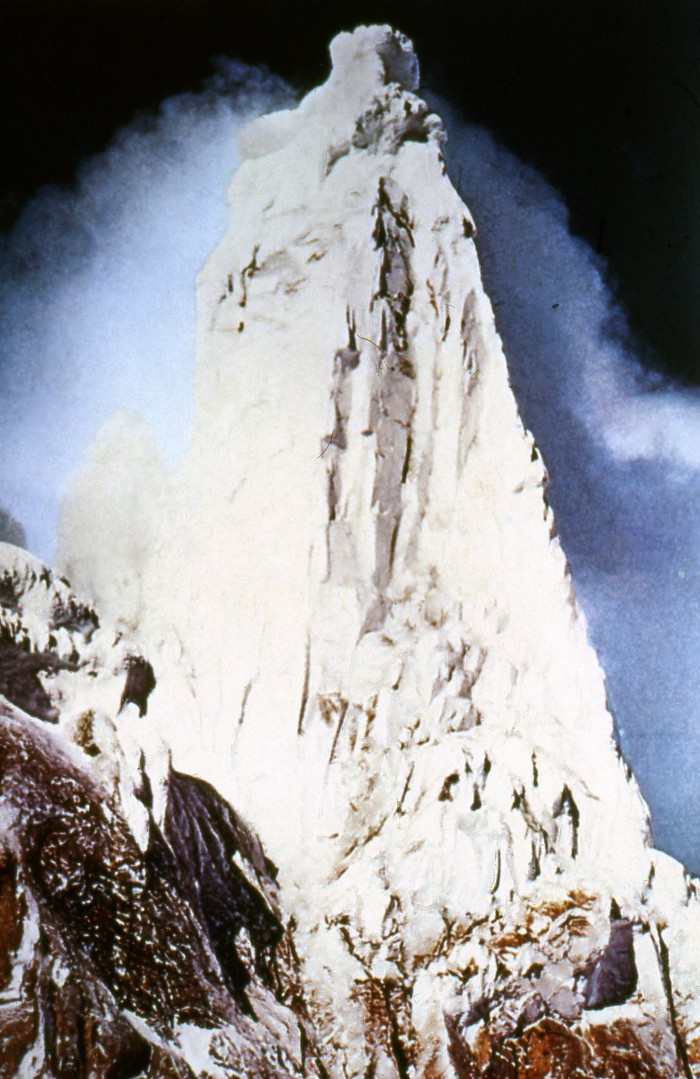 Can a mountain represent an alpinist? Sometimes yes, sometimes surely no. It often happens to be prisoners of a mountain, more likely of a single route. The temporary link between alpinist and mountain after an ascent becomes a true and proper fusion. So it happened for Bonatti and K2, and so it happened for Casimiro Ferrari and Cerro Torre. It’s like becoming a unique entity, and the impossibility of overcoming the own limits brings to the risk to see vanished many other efforts, to see a lifetime’s commitment not acknowledge in favor of a single episode.

When I’m introduced to somebody else, often I am ”one of the Torre’s four”. At Cerro Torre we were thirteen, but the four of us, Casimiro Ferrari, Pino Negri, Daniele Chiappa and I, Mario Conti, are Torre’s four, since we reached the summit. Everybody forgets about the many other ascents done worldwide, mine and Pino’s alpine guide careers and Daniele’s rescue career are never acknowledged. After all, however, this is not such an uncomfortable jail. Being linked to something big, makes us immediately recognizable. It would be certainly harder to be recognized by a list of ascents, of great value, but less detectable than Cerro Torre. Can you imagine a presentation like this: Alpine Guide from Lecco, sixty years old, climber of many big walls. Protagonist of several expeditions such as the national expedition to Lothse South face in 1975, an expedition to Lothse Shar, various in Perù and Patagonia, the summit without oxygen of Cho Oyu in 1988, a few climbs in Africa, various explorations all over the world, a participation to the Paris-Dakar with Fiat Panda 4×4…and so on? One of the Torre! Surely better, more concise and precise, synthetic and straightforward, like I am. And, in addition to this, the luck of being depicted by a mountain which well represents me. Isolated, at least in 1974, difficult, and surely direct and honest. Torre is able to pay back a lot, if you’re willing to invest everything.

So we can look to the mountain and hence learn something about me.

I don’t like appearing, and writing even less, but I owe this text to the youngsters of my group, with whom I’ve a great relation and I share, also nowadays, many experiences.

When I left for Torre I had never climbed with Miro. We were the two “firsts” and each of us had his partners, the “seconds”. In order to understand this difference we’ve to go back in those years and look to the belay practices. ”First” and “second” was not a value ranking, but roles of that team which is called rope party. Not every first could be a good second, this last role was usually attributed to sturdy people, able to absorb a fall of the partner and clean out the gear quickly, but also with a mild character, able to give a fundamental psychological support. Miro and I were good firsts and the experience of Torre was a lucky parenthesis. Also afterwards, it never happened again that Miro and I were tied on the same rope on an important ascent. In fact, it happened just at Torre that we were on the same rope party without renouncing to our prerogatives. Miro led almost the entire route, and I also had the opportunity and ability to open a few pitches with him and then with Pino Negri.

Reconstructing all the ascent here is pointless, since it is already well recounted in the books on this topic, so I prefer to spend some words about the emotions of the last days and about the memory of my partners.

Committed for the last chance and worn out by the malo tiempo and by the hunger, we climb up the previously equipped pitches, starting from the Elmo. We had the feeling of having the Torre in our hands once we climbed the crux pitches on the headwall. It was my turn to lead, while Daniele and Miro were having some rest at the camp; I tackled an overhanging corner, which would have led to the last pitch of the headwall, before the final ice mushroom: the crux. Each route has a crux pitch or move, something that once overcome you feel like having solved the whole route, you’re caught in the euphoria, and very often that’s a great encouragement for solving another following crux. Torre’s final part didn’t deny that rule. Once overcome that desperate corner, with mixed and artificial climbing and with a great effort by Pino, that under the vagaries of the weather and of the mountain, had to counterbalance my precarious job of opening on crampons and etriers, I reached the ledge that was before the last step of the headwall. After having belayed Pino, we looked to the new perspectives of the ascent for reporting them to our leader. Miro was looking at our progression and with the excuse of bringing forward the necessary gear to reach the summit he decided to climb up and check personally what would expect him the following day. We were descending and he was ascending when we met him and we described what we saw. That “following day” came some days late, but the right moment arrived.

It was mine and Miro’s turn putting theories into practice in the last part of the route on Torre. We left Daniele and Pino with the last gear at the camp; in case they had seen us about to summit the headwall, they would have joined us. Quickly we found ourselves at the highest point previously reached, the place where Miro and Daniele had left the gear. Miro offered me the chance to continue opening that part I already began a few days before. I refused. That was fair. From the beginning Torre had been strongly desired by Casimiro. He had challenged everybody in Lecco, he had changed the destination of this expedition which was celebrating the 100th anniversary of CAI Lecco, he had taken all the responsibilities, from the choice of the team to the choice of the line. If that 13th January we were there that was mainly thanks to his stubbornness, to his will of never give up, when our head, our bodies and our feelings were already on a sad way home. It was his right to stand and to walk first on the summit of Torre. The crux pitch had been climbed by Miro by inventing kind of a ”piolet traction”, made up by the use of two ice axes – which was the only similarity with the modern piolet traction technique – employed as hammer and spike for the progression. Bringing a second ice tool wasn’t common and this ingenious invention needed the use of the ice axe of the partner, in this case, mine. I was seconding, preparing the fixed rope for Daniele and Pino. Our two friends had seen us going on and strong of the weather conditions we saw them climbing up. Thinking of Pino, I have to mention his physical and mental strenght. Just a few days before he was at Paso Viento for supplying food and now he was here as if that enourmous strain had never happened.

After the overhang we had to face some new terrain, another crux, just not to deny what I wrote before: the final icy mushroom, the spongy ice, made more by the solidification of the moisture rather than by the precipitations gave us some troubles.

And still nowadays it causes troubles to the most of the repeaters of our route since the most of them give up in front of this inconsistent and unprotectable meringue.

We were opening this route and the route had to end on the summit! Miro started to traverse right, always using the two ice axes, gently on an ice layer covering the rocks underlying the mushroom cap. Placing protections was impossible. He saw a chance of gaining altitude and started to climb on a sort of couloir which seemed to lead to a point of weakness of the final overhang. He equipped a belay station and belayed me. I joined him yelling, climbing up on vertical terrain was already hard but traversing without the ice axe, grabbing with the hands the pockets made by Miro on this inconsistent ice was definitely dangerous.

Using the fixed rope has Ariadne’s Thread, Pino and Daniele arrived after me. To the summit now! Miro found himself in a cul de sac, cutting steps in the ice was impossible, placing ice screws or pegs was impossible, climbing up was impossible. He decided to let me go up for a while to look for some other possibilities, we thought about the possibility of digging a tunnel in the final overhang. Then an intuition: he lowered me for some meters towards a point of weakness of the wall that seemed to appear beyond the arête, a kind of hollow where the inclination was changing, I couldn’t see anything else. But Daniele and Pino, by going around the arête from the belay station could confirm that chance and Torre’s summit was reached!

The rest is well-known. The descent. Meeting Gigi and a few others at Rio Tunnel. And the following reunion with the rest of the crew which had moved on the Valdes peninsula. The stories of the protagonist and of who had tried before us. Torre was a myth, so loaded with charm, but also with controversy and poisons. Our ascent was a milestone. Unquestionable. Clean. Certain. From that moment the mountain came back to be like this. We showed the possibility to climb it respecting the unwritten loyalty’s rules. Nowadays, thirty years after, I can say, that this was one of the last successes for a group expedition. Alpinism was evolving so fast as techniques and materials. That very same route, thirty years after, has been repeated in alpine style, incredible!

Talking of the result of a group one can think that the contribution of all the members is the same. In the reality it’s not like this. It’s obvious that everyone has his own abilities. And a group works when nobody stands back. Probably on the Torre it went like that, in this sense, that was the result of a group of people, so strong as so apparently unlikely, kept together by the same goal.