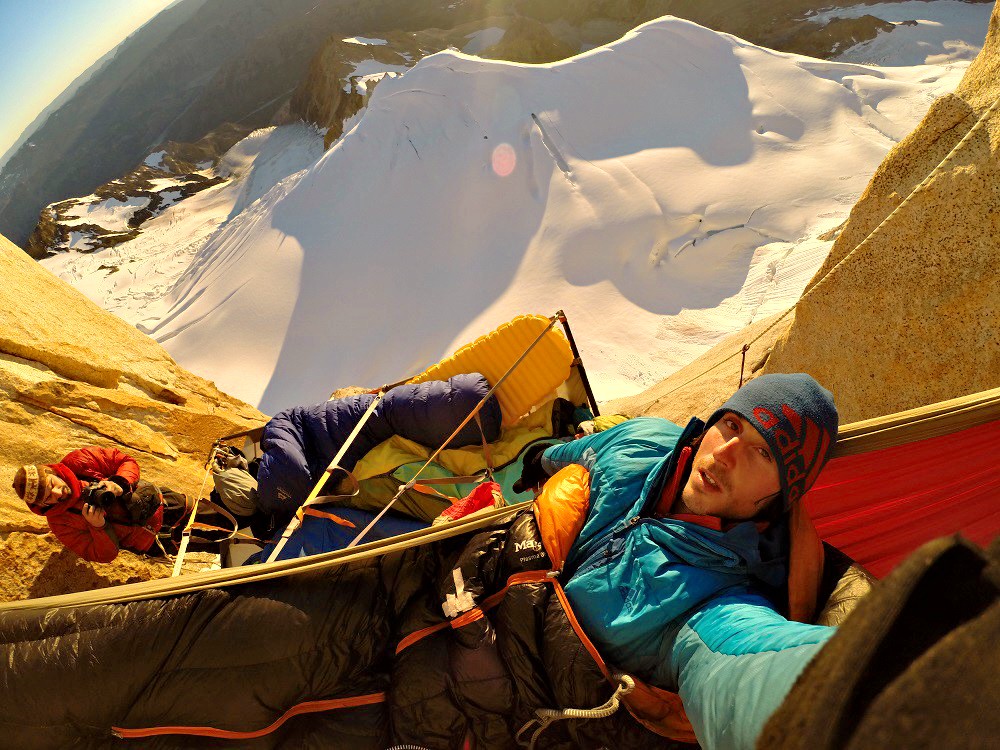 Thursday 29th January. Luca and I go back to El Chalten after climbing the Red Pillar on Mermoz.

Friday 30th January. After a rest day, in the evening our friends Silvan and Pascal also arrive in El Chalten and bring us a lot of enthusiasm and motivation. The weather forecast is good for the first 3 days of February, so after emptying the backpacks we fill them up again and leave for Paso Superior. 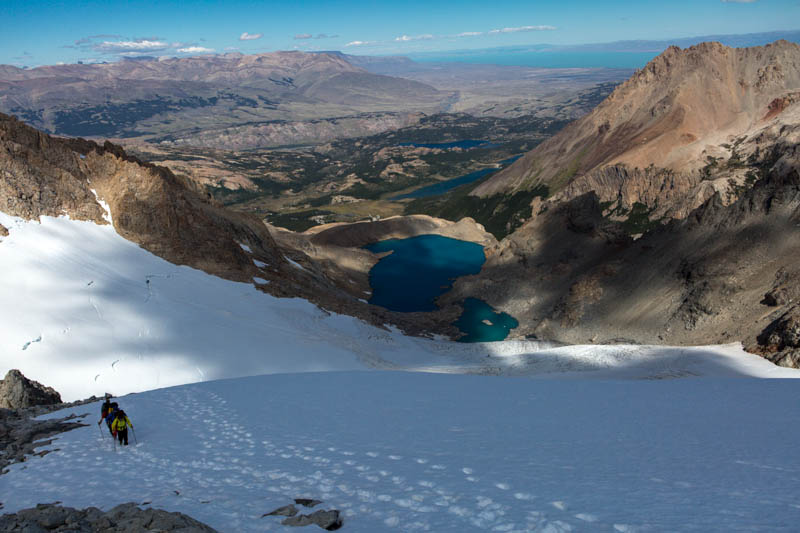 There are a lot of questions turning around in my mind: will I have recovered from the previous climb? Will 3 days be enough to climb this monster wall? How will the conditions of the wall be, will there still be metal ladders and icy cracks? Will we manage to move fast in the wall?

For sure I would have never thought to come back to Paso Superior only 48 hours after going down, but here we are, in the end also without too much effort. Silvan and Pascal’s optimism is contagious and I also think that we’ve nothing to lose: tomorrow we’ll start for 3 days on the wall and all the questions in my mind will receive and answer. 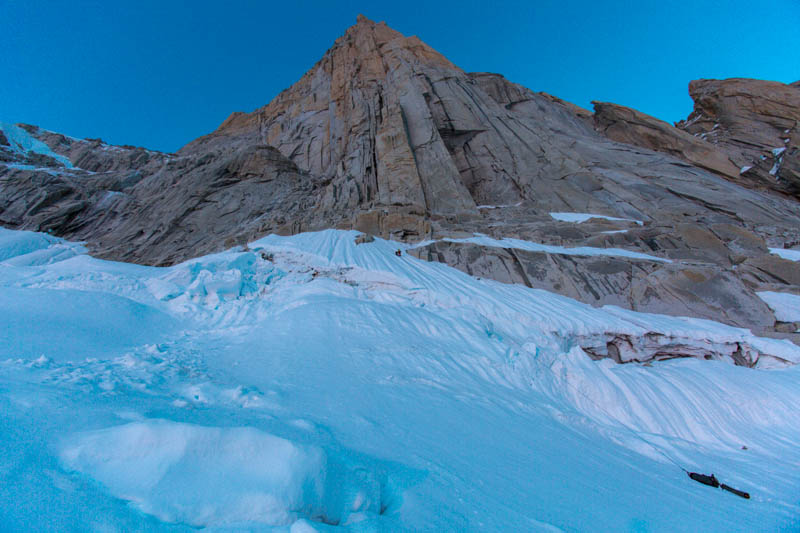 Sunday 1st February. Silvan climbs the bergschrund and I take the lead on the rock. It’s like one year ago: in front of me there is a 150 meters corner with perfect cracks, mostly hand size with some off-width parts. On the first 3 pitches the feelings are great, they seem to be much easier than last year, I can free climb them without losing time and energies…Thanks to some training in Indian Creek? Quite likely yes. For sure I feel in a better shape than on the Red Pillar.

On the first day this is our rope party: I lead, hauling a haul back with the things for the day. Silvan follows on jumar, cleans the pitch and fixes a static rope for Luca and Pascal; the two have the unthankful, but absolutely fundamental task of hauling the two heavy bags and the portaledge. 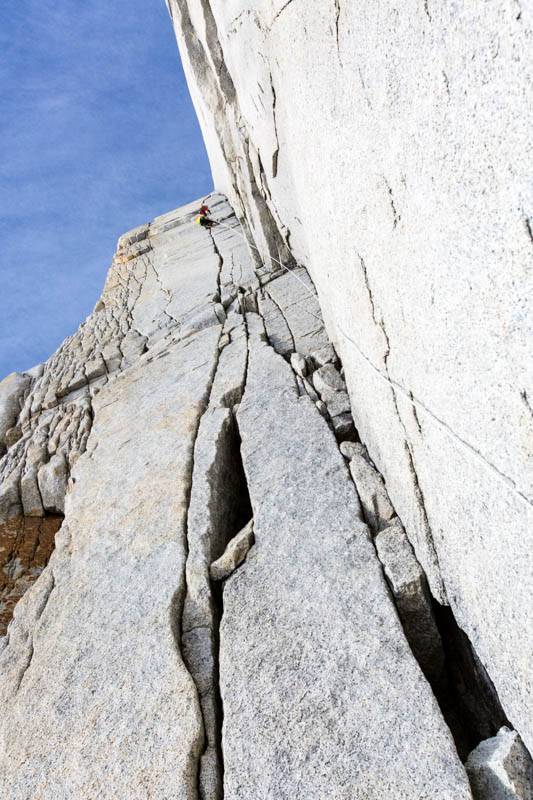 Shortly I found myself in front of the “pitch of the ladders”, that last year was full of ice and snow and impossible to free climb. This year the pitch looks in better conditions…but still quite wet and verglassed. With some more effort I anyway manage to free climb it and afterwards there are another couple of pitches in icy chimneys and cracks…what a pleasure free climbing in Patagonia!

I get to a traverse leftwards that last year I overcame with a pendulum (thus not on free climbing). There are the same conditions of wet/icy than last year and to me it looks like there is no other solution than the same pendulum. I’m about to tell Silvan to take, when, after kindly trying to encourage me, he says: “look, if you don’t even try to free climb it maybe I go down!”. Well, he’s right. I cannot give up without even trying! After some attempts I found some kind of recurrent solution, when climbing on granite: 10 meters of downclimb and delicate traverse on a slab, this time with a final awkward jump into an icy chimney, to climb back up…the pitch goes! Thanks Silvan.

Another couple of easy pitches jumping with the climbing shoes among snow and ice dots and the wall gets steeper. I start climbing new terrain (that I haven’t climbed last year). Unfortunately the conditions of the route get worst, always more wet and always more ice in the cracks. I have to aid up a short wet finger crack. Then when I get to the belay Silvan lowers me and I manage to free climb it on toprope. However I have no chance on the following two pitches: the crack is totally filled with ice and snow and a terrible mix of metal ladders and old fixed ropes which makes already the aid progression hard, slow and cumbersome. 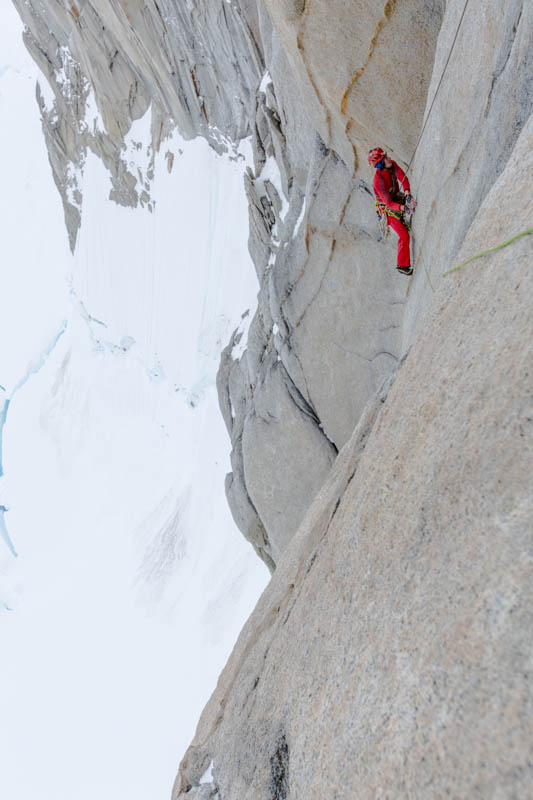 At least I arrive at a good bivy spot and it’s already 6.30pm, so after waiting the others hauling the bags, we prepare the bivy spot for the night. Luca, Silvan and Pascal go on the portaledge and I stay above them in the hammock. It’s the first time I sleep in a hammock on a wall, and it doesn’t look so bad. We melt some snow, cook dinner, take some rest and analyze the situation. 500 meters down, more than one third of the wall, almost 900 meters to go, which promise, at least for the first part, high difficulties and icy cracks.

But this is not a problem. The problem are Silvan’s conditions: he wasn’t feeling really good since the morning and of course now he’s feeling even worse: shivering, temperature, pain the bones and general tiredness. He also doesn’t get better in the night and in the morning we have to take a hard decision.

When you are in the middle of a rally, where you know that you’ve to go at full gas, and you get a hole in a tire it’s clear that your chances of success dramatically decrease, if not disappear. Our vertical machine now has a flat tire and we cannot fix it, what should we do? The weather is good, but splitting the rope party on such a wall in Patagonia is not an option for me.

We arrive to a compromise solution, in order not to lose the good day: Luca, Pascal and I go up on the following pitches and Silvan rests on the portaldge, where we will be back in the evening for going all down the following day. 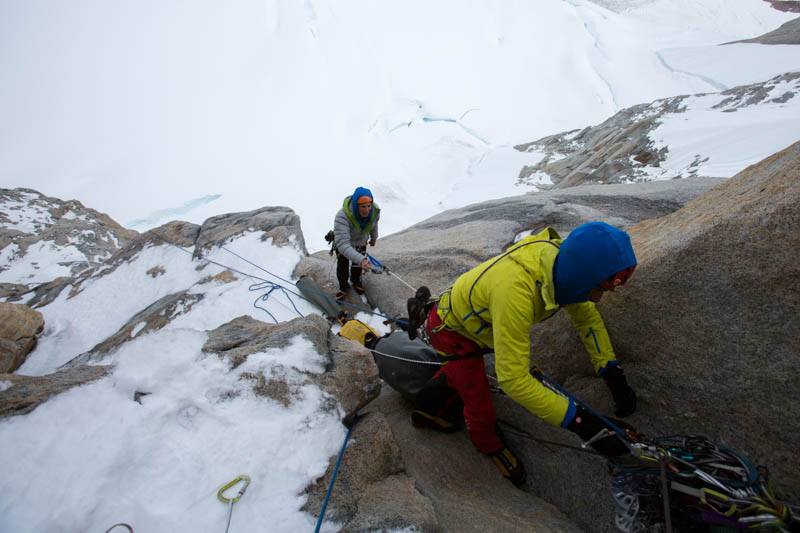 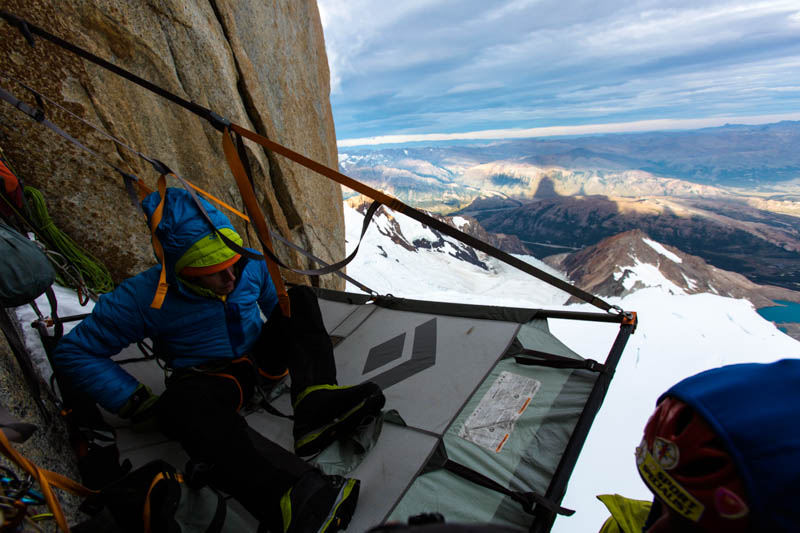 The second day the order in our party changes: Luchino takes the lead, I am second and Pascal third. Difficulties don’t decrease and , of course, conditions don’t get any better, nevertheless we manage to go on for another 250 meters and see what’s next. This time Luca has the hard task to battle with icy and snowy cracks filled with ropes and ladders! And I find out that in the end being second on jumars is not too bad, I also manage to take some rest from the fatigue of the previous day. Pascal also takes some rest and does an excellent job in taking pictures and filming.

In the evening we’re back to the portaledge where we had left Silvan. He is still quite sick and after spending a second night hanging in our shelters, in the morning we pack and begin rappelling down. 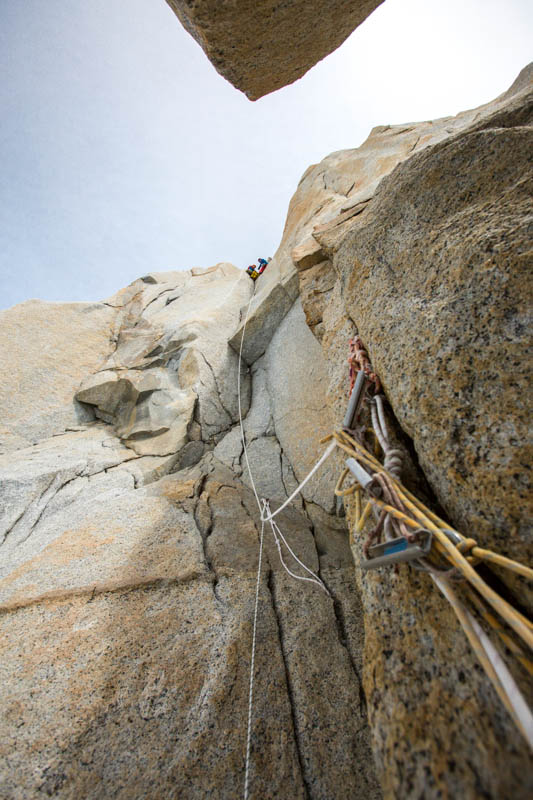 During the descent we manage to cut several ropes and ladders that hindered the progression and we notice that in these days of good weather the wall already got much drier than before.

We go back to Paso Superior, where in the middle of the night our friend Luca Gianola also joins the group. Unfortunately he arrived in El Chalten two days later to join us for the ascent.

That’s how this first round went. As always there are so many things that need to match in the same moment to reach success. We’re anyway learning to know this wall and personally I’m really looking forward to putting back my hands on it. 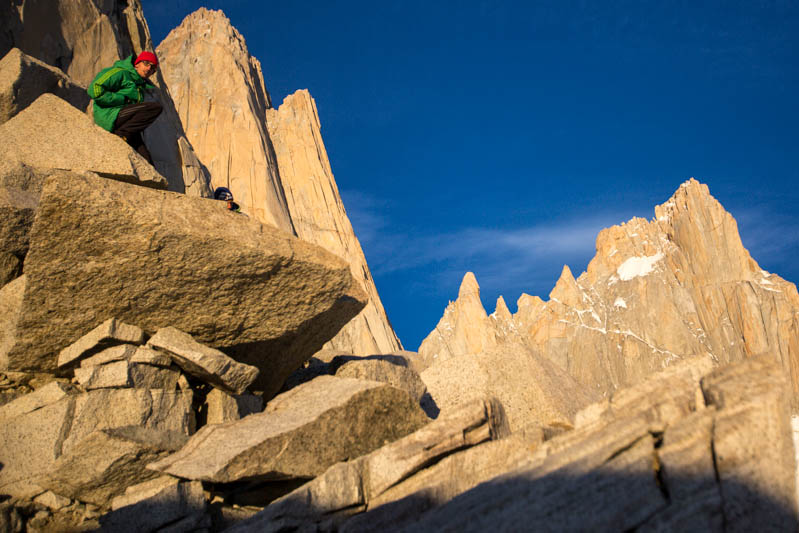