NOTE: the cove photo has been shot years later by Mikey-Schaefe, and climber is Tommy Caldwell

Matteo della Bordella and Fabio Palma have recently completed the longest route at Wendenstock, the immaculate limestone escarpment of “Verdon quality” situated high above the village of Gadmen, west of the Susten Pass in the Titlis region of Switzerland. The area is world famous for its hard multi-pitch “alpine” sport routes and features a relatively long, steep and strenuous approach. The new route lies on the giant overhanging walls of the Mahren, right of La Svizzera, a ten-pitch route climbed free in 2007 by the renowned Italian Rolando Larcher at 8a+

The Italian pair started work on the climb in September 2006 and spent around eighteen days in total on the wall. The result is a 660m, twenty-one-pitch route christened Coelophysis, a name proposed by Palma’s son. In length it eclipses Wenden’s previous major routes such as Vrenli, Cyclopenauge, Virus and Rockmantic. The fourth pitch, freed by della Bordella, is a very technical 8a+ (5.13c), but there are a number of challenging pitches, from off-vertical to overhanging. The pair tried to minimize their use of bolts, which has forced obligatory moves of 7b (5.12b). Cams are essential, and there are two possible bivouac sites: at the top of Pitches 7 and 13. Della Bordella and Palma feel the big challenge now is to climb the route in a day: an on-sight, one-day ascent would be a tremendous achievement.

Fabio Palma on Pitch 20 (7b [5.12b]) of Coelophysis. The route is now the longest at Wendenstock, where the Swiss limestone is notorious for bold, difficult routes.

This demanding section of the Wendenstock escarpment has seen little documentation, and even in Switzerland there are few who know about all the existing lines. On the left edge, up a short pillar, is a six-pitch route called Muggen Stutz (7a+ [5.12a]). Next to the right is the bold Peter Lechner route, Cyclopenauge (7b max, 19 pitches). Then comes La Svizzera, Eiserner Vorhang—a nine-pitch route by Michal Pitelka at 7c, an extreme project by Pitelka, Gimini (seven pitches to 7b+, 6c obl.) also by Pitelka, and Coelophysis.

Looking down the top section of the crux pitch of Coelophysis. [Photo] Fabio Palma

Della Bordella and Palma have now repeated many routes at Wendenstock (thirty for della Bordella and twenty-two for Palma) and in August 2005, with Domenico Soldarini, put up Portami Via (7c+, 250m, 7 pitches) just to the right of La Strada del Sole on the pillar immediately left of the waterfall. According to della Bordella, who has onsighted the Fish on the South Face of the Marmolada and many other similarly challenging routes, the atmospheric Portami Via (situated only 20m from the waterfall) is one of the most demanding routes on alpine limestone and only surpassed in difficulty at Wenden by Zahir (8b [5.13d], 7c obl.). The taxing nature of the climbing is mainly due to the spaced gear, which makes the climbing much more runout than the Fish or Specchio di Sara on the Marmolada, and the obligatory difficulty (7b). There are twenty-five bolts on the route and the distance between them can be up to 15m. On Pitch 4 (6c) the first bolt is 15m from the belay, and on Pitch 5, the crux, the first ascensionists feel it is simply better not to fall. The only pair to repeat this route to date is Simon Anthamatten and Ueli Steck, who completed the line around a month after the first ascent and confirmed the grade. 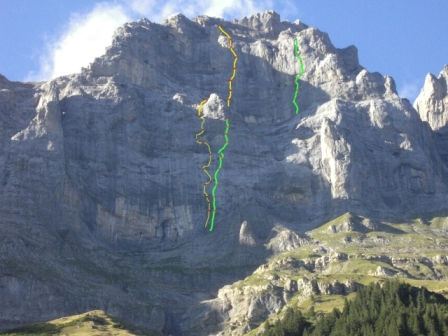 Wendenstock demands respect: even the easiest classics, such as Excalibur, have difficulties of 5.10d. Palma also notes that the grades can sometimes be harsh, and that a Wenden 7a might be 7b in many other areas. But for those wanting to take up the challenge, climbing at Wenden is best from July to October, and despite the altitude can sometimes be quite practical in winter. 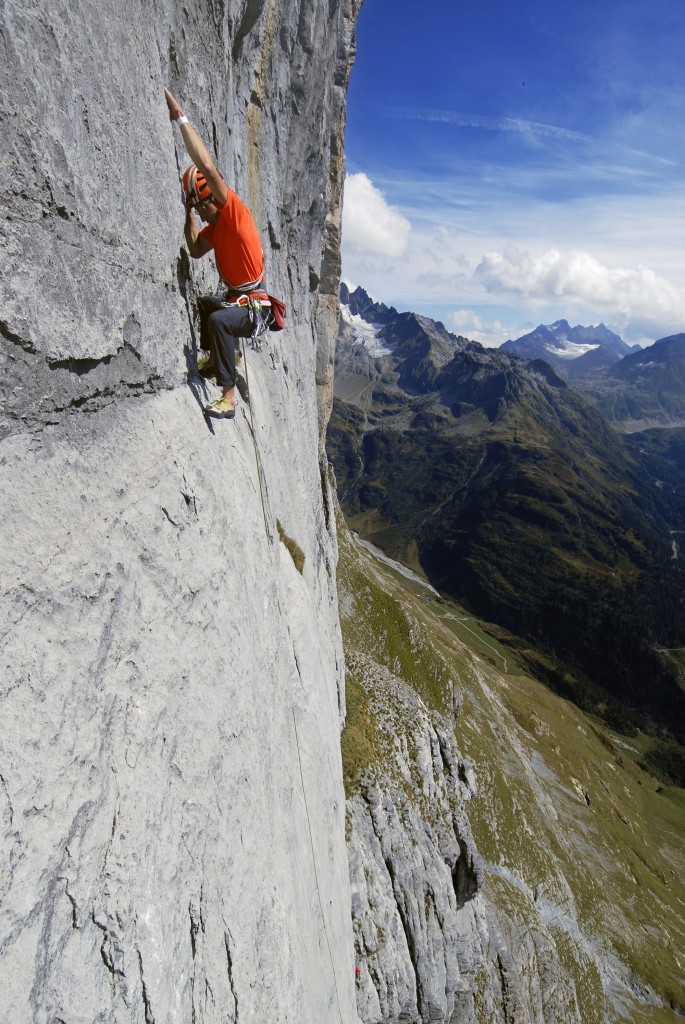