In April 2015 Simone Pedeferri made the first ascent of “Io non ho paura” (225m, max 8b+, 7b obligatory) a new rock climb established together with Alberto Marazzi on Scoglio della Metamorfosi in Val di Mello. The route is dedicated to Luciano Barbieri. 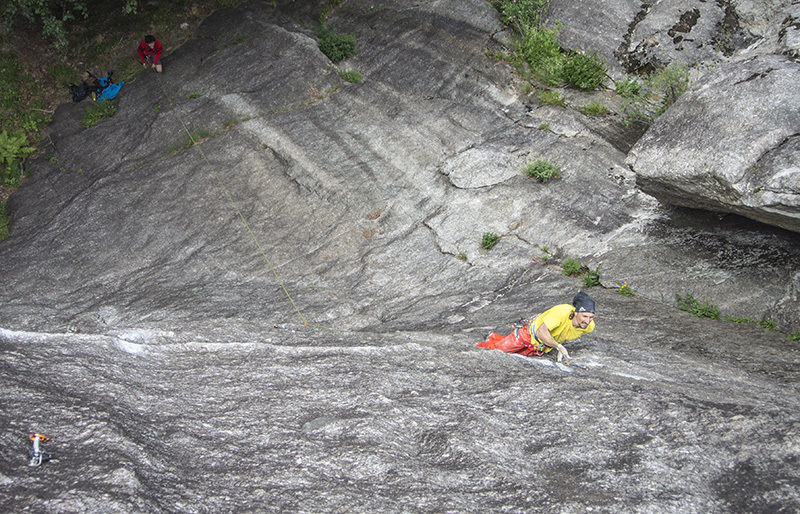 “Climb the black streak. And you know what that color implies… it’s almost always wet since water seeps down from above” is what we were told by Simone. All routes have their own story and this one began a long ago. “I climbed the first pitch ground-up with Alberto “Kurt “Marazzi in 2000, 15 years ago… Then at the belay we couldn’t work out how to continue…” That first rope length, established on lead, checked in at a mighty 8a+. Then pitch darkness, no go. Above lay a sea of granite, a dark black mass. Unfathomable and steep. Apparently holdless. In short, as often happens, it all started with a question mark, which a challenge or, better still, an interpretation whose outcome was uncertain. The seed was sown, its growth a slow process that only occasionally saw some light, between one climb and the next expedition.

This is what is called a project. A problem that dictates time, that cannot be hurried. So much so that that black streak was always there, waiting, without asking why. Until, one day, the decision was made: Simone abseiled down from above. He wanted to see and understand whether that black granite really was devoid of holds. He wasn’t the first to adopt these tactics. He won’t be the last. But, perhaps, what counts is that he did so after careful contemplation, after having thought it through and waited. That inverse exploration helped him discover that, yes, there was something after all in that 225 meter void. Something elusive, like those holds that “aren’t there”. Something that had the charm of doubt and that, if resolved and climbed free, could have few equals, both nearby and also on granite in general. And so it was that, 10 years ago, he decided to bolt the route. Simone explained that he decided “to make it a sport route” … where sport route implies “well bolted.”

How far can you go in 10 years? Far, in our opinion, and this doesn’t necessarily mean gaining many meters in height. What counts is the waiting game. Because as we already know: that strip of black granite is more wet – and thus impossible – than it is dry. And also because “There are no holds, or rather, they’re strange. Being strong hre is only one part of the game, what counts is giving it that something else..” In short, it’s an elusive route. You need to find just the right moment. Find that special feeling that is so difficult to seize. “You have to feel it inside, otherwise it’ll slip from your grasp”. But there’s more: “That black wall is almost like a canvas. You have to wait for those rare moments for it to dry… only then do those marks appear, those little white spots that show the way. And all it takes is a little bit of rain for everything to become invisible, for everything to be washed away.”

Yes, you need the necessary calm to avoid making rash, rushed decisions. To wait for that fleeting moment – that wonderful balance – to arrive. For Simone this took place just over two months ago when he made the climb’s first free ascent. It marked the end of a journey, a search for its being, but also an idea of ​​beauty applied to climbing. An exaggeration? Possibly not, it you look at the route topo and also the photos of the “ballet” needed to climb it… Probably not, if we tell you that Simone is that climber-artist, Ragni di Lecco member and Melloblocco route setter who goes by the full name of Simone Pedeferri. This is his third “sport” climb in the last 12 months after Catastrofa (Isolaccia Crap de Scen, 250m max 8a, 7a obligatory) and La Divina Commedia (Buco del Piombo, 150m, max 8b+, 7a obligatory). This third and most recent route climbs the huge Scoglio della Metamorfosi, immediately to the right of that monument to pure beauty Luna Nascente. All that remains to be said is the name: Io non ho paura… I’m not afraid … future ascentionists will discover its greater meaning.

Io non ho paura is dedicated to Luciano Barbieri, the Italian climber whose vision greatly influenced many others. He was a great man – perhaps not particularly famous – who in the ’80s and ’90s climbed the entire spectrum, from early sport climbing crags to the massive mountain faces on Mont Blanc.