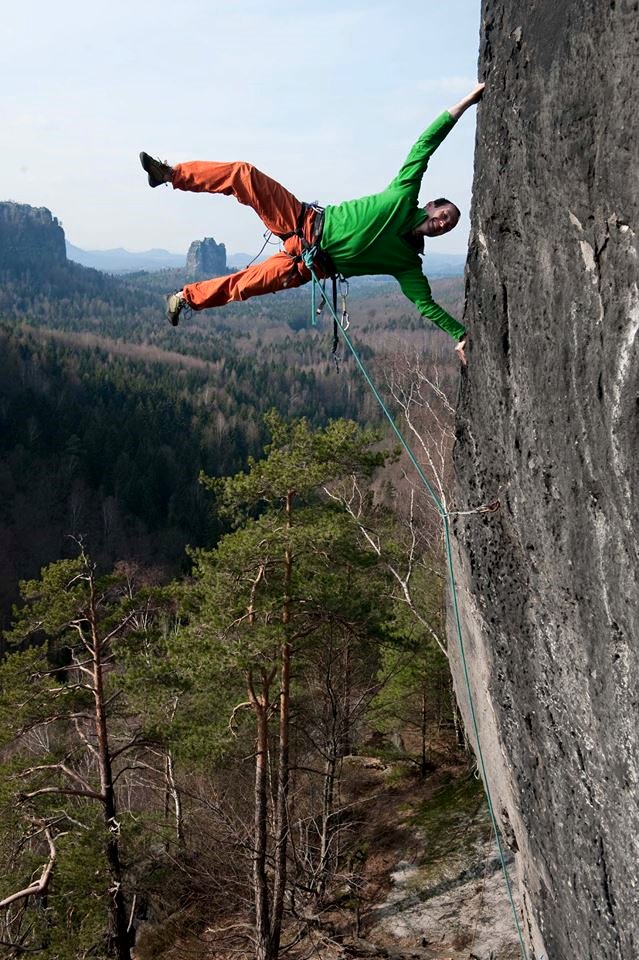 As someone who has to work full-time and has a family, there’s not much left for adventures and weekend activities. So I have to live the life of the so-called weekend warriors, which means getting out there and battling against your fears and limits during two days of liberty only. The few weekends I get, during which I drive 900 km south towards the Alps, are rare and have to be used properly if I want to experience things that leave lasting impressions. What follows are the stories of three climbs carried out together with Stephan Isensee.
Infinite Jest 8a+ (7b obl), Wendenstöcke
It was more or less an accident that we chose this route and we hadn’t expected anything this serious. Over the last few years the Wendenstöcke has become my favourite destination in the Alps and after climbing the routes Batman and Dingo I thought things couldn’t get more sustained and bold in terms of protection and obligatory climbing. Infinite Jest proved me wrong. Coming from the East German Elbsandstein area we are more accustomed to run-out climbing than to placing nuts and cams, so we find it quite handy when we can clip some bolts now every now and then, even if they’re well spaced out. When we started up this route we thought small cams and nuts would serve nothing more than acting as the usual additional weight, but we were wrong. Right from pitch 2 we realised this route was decidedly different: the climbing was sustained and also somewhat frightening between the bolts. In actual fact most of the route was like this and, apart from the crux pitch in the lower half, every pitch was a mind game. We were more than happy to second as this allowed us to calm our nerves a bit. We often asked ourselves what had brought the first ascentionist to the point of pushing themselves so far to risk such long falls. Since I’m afraid of falling I managed to avoid taking a tumble, but with so few bolts it’s easy to lose your beatings and climb off-route, as Stephan did. After maneuvering himself into a dead-end, he took a 15m whipper. Those are all very intense memories, despite being over 3 years old. Unfortunately we didn’t get the chance to complete the second half since a water streak dripped down the entire line. Climbing just half the route is certainly not a redpoint, but these words might provide information to those wishing to repeat the route in the future. I personally was more than happy with this nice adventure and for having sent the crux pitch with its reachy undercling move.

Il Mito della Caverna 8a (7c obbl), Gendarme de Gramesüd
When I got a bit keener at placing nuts and camming devices the bad weather forced me back south into a fairytale valley. After climbing Super Cyril in 2010 a stunning rock formation in the lower part of Valle Bavona caught my eye. At this time I asked myself whether the steep face with its obvious system of corners, that peters out at half-height, was climbable. It took 2 more years for me to hear that this line had been climbed and for me to return to the Gendarme above the power plant. Now a bit smarter than before, I knew that routes from Matteo (Della Bordella, Ed.) should be taken seriously and quite rightly so. The initial climbing was pleasant and as we reached the corners the rock got better and very steep. Friends and nuts are more important here due to the nature of the rock. The weather was so bad that we were happy to reach the corner before the skies opened. After the corners the route is so steep and protected from rain that it took more than half a day for the water to seep down to the upper part of the crux pitch. While the lower section was an old project with fairly good protection, the sections that lead up to the crux become more and more serious. The 7c pitch is committing right from the outset, with a traverse right above the void with nothing other than the belay to protect you. Luckily just around the corner there’s a corner than took some of our smallest cams and offered reliable protection. Going back left was somewhat of a nightmare for me. I couldn’t reach for the next holds and there were no other footholds to speak of. I was forced to make a fully committed dyno to reach the first bolt. Higher up we managed to do the crux but at 2/3 height the water started running down the face, so we retreated and returned later to finish off where we had left off. Unaware that the last bit of the 8a pitch would be a redpoint battle with only the smallest RP’s for protection. The final, easier pitches proved to be full value and on pitches like these, the grade really doesn’t mean much. Even abseiling down the route is an adventure since it overhangs so much you have to fix your tagline to the last bolt of the 8a pitch and, hopefully you’ve brought an 80m rope, with which you can reach the tagline via two single rope abseils. Full adventure value once again. 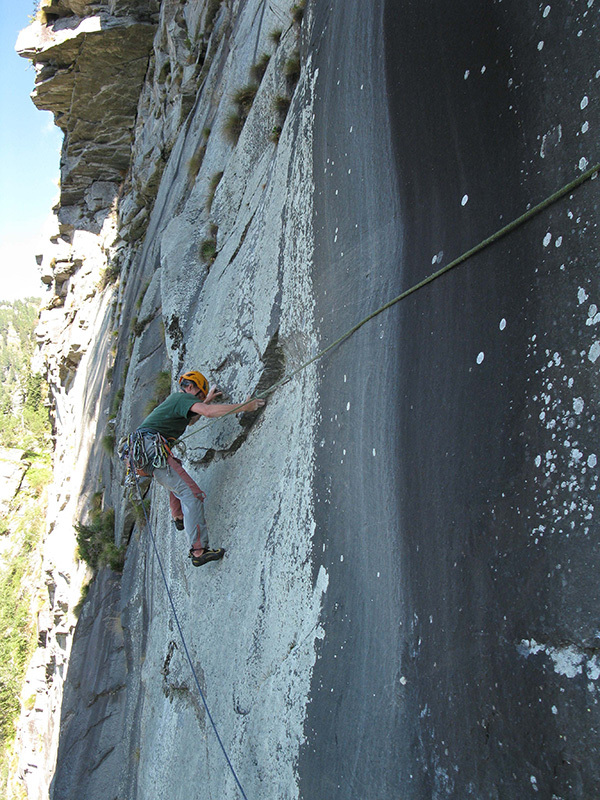 Non è un paese per vecchii 7c+ (7b+ obbl), Linescio
Our latest encounter with one of Matteo’s routes is fairly recent. From our experiences in the past we knew that, without knowing the pitches, it was impossible for us to send a route like this one in a single day. So how could we manage to climb it during a 2-day weekend? What’s more, with our 1800 km drive, we wouldn’t have more than 1.5 days to climb it. We opted to go big wall style and take a portaledge. We knew the route faced south and that it could get really hot up there, so we hoped for cloudy weather.
The approach is fairly straightforward, but longer than expected. It took us 2.5 hours with all the gear and we were lucky that someone had left some fix ropes on the steep slopes which were wet and slippery. Without those ropes an ice axe would perhaps have been a good thing! The route itself is impressive and with 20 bolts in 430 m of climbing, plus the belays, I’d say it’s the most demanding of the three climb described here. The wall is fairly atypical, featureless and in some places it really is destiny that it’s climbable. The gear can be thin and RP’s and 2 small Ballnuts can be quite handy. The first 6 pitches took us the entire first day and I have to say that in the evening our bodies were as tired as our minds. It wasn’t the best place for a portalege and perhaps one could even do without one, not lying down, but half sitting. That night it was warm and pleasant, unlike during the day when we got baked in the sun and our feet ached like hell. Since its a technical face you have to wear tight shoes and the unlocking the key to the slabs is never obvious, resulting in much up and down climbing until we found a solution. Day 2 proved even more demanding with the crux on pitch 8 offering some very committing and pumpy moves up the corner. Minimal pro and committing moves, with no way back, are what lie in store. The 7c that follows looks impossible with all the lichen that plasters the blank rock, but in actual fact it turned out to be rather friendly with a bouldery crux protected by the first bolt. The powerful overhang at the end was the last barrier that shielded the top of the route, and whoever believes that this might be easy compared to the slabs below couldn’t be more wrong. Placing the gear in the sustained overhang was quite pumpy and finding the right line of ascent wasn’t obvious by any means. When we finally reached the top there wasn’t much time to recover and celebrate since we had to make the long way back down to the car and the even longer way back home.

Some people might say: “Why are routes like these three so sparsely bolted and, are they really necessary in the first place?” Personally I would reply “Yes, they are, because as long as they have been first ascended ground-up, then they are milestones for those who established them. It’s also necessary for younger climbers to go their own way and discover their own limits. Lastly, I don’t consider these physically and psychologically demanding routes a waste of finite rock space, on condition that there are already plenty of other well-protected routes in the area for most others to climb on.” 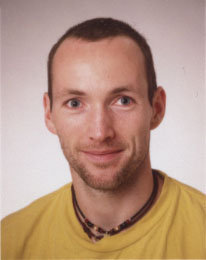