In November 2015 Simone Pedeferri, Paolo Marazzi and Marco Maggioni made the first ascent of El Chaman Loco up the El Chaman face at El Salto, Mexico. Some pitches along this 400m climb still need to be freed, with difficulties estimated at 8c. The trip report by Paolo Marazzi. 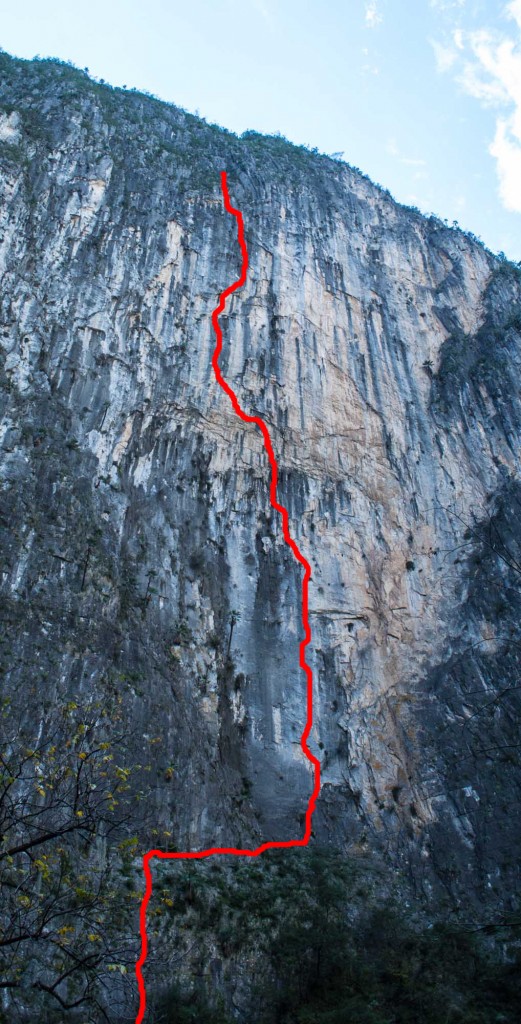 You should never begin an article with a PS, the acronym meaning postscript should, as the word suggests, be placed at the end of an article or a story. But I want to place it right at the start in order to highlight something very important:

PS: If you ever have to travel with Simone Pedeferri or Marco Maggioni, be warned, you’ll have to look after them for the entire trip and do all communicating in foreign languages, and with foreign I mean anything that isn’t Italian! As to the rest … well, traveling with them is a cool experience, a perfect combination of Marco’s shy and reserved nature, and Simo’s outgoing personality. 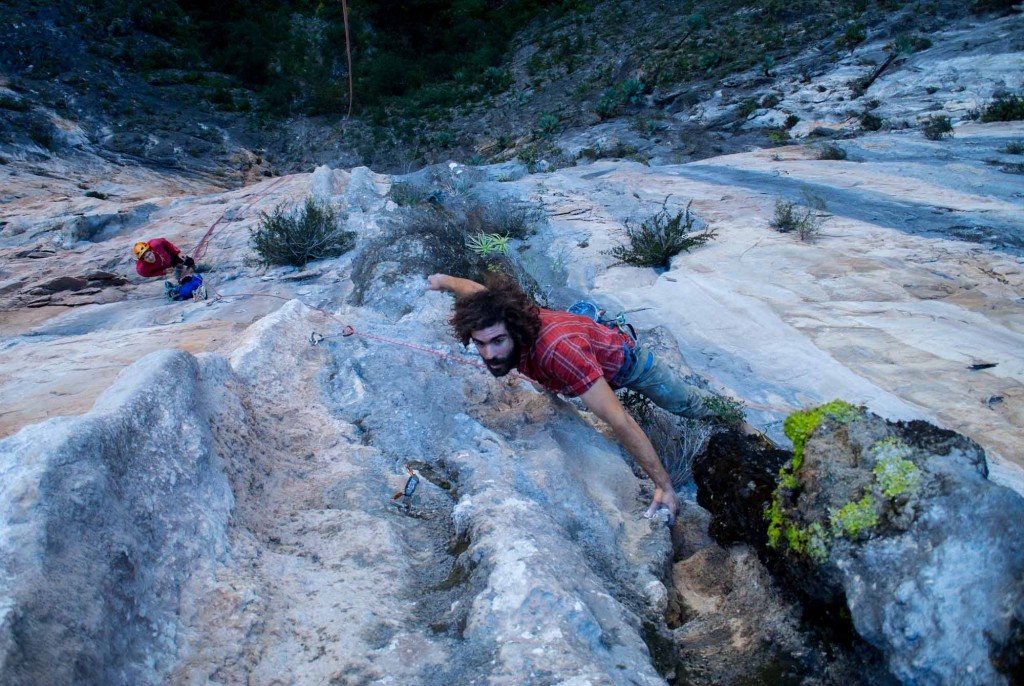 We departed on 15 November and, after dealing with delayed flights, a seemingly phony car rental company and spending the night spent in a hotel at Monterrey, we finally reached El Salto, a small, apparently peaceful village in Mexico’s north. I specify “apparently peaceful” as every day motorbikes and jeeps that ventured into the canyon, right where we established our new route, zooming around blasting out typical Mexican music

We spent first few days we examining the rock faces through our binoculars and searching the walls, everything looked good at first sight but on closer inspection proved poor, since the rock was often loose and some faces were simply too overgrown, seeing that we only had 25 days in total. We were helped by Ulric Rousseau, a Canadian climber who for the last 7or 8 years spends five months down here in his van bolting crags. On the first day he showed us a face called El Chaman, but it didn’t convince us, or perhaps we were just a little intimidated by it. Its history was fantastic, truly special, absolutely crazy.

The face had been attempted twenty years ago by Paco Medina and Alex Patino, two futuristic Mexican climbers who, due to a lack of money, were forced to abandon the idea. Shortly afterwards Paco, for a love story gone wrong and a bit of peyote, ended up in a psychiatric clinic in France, half his body paralyzed and a failed suicide attempt to his name. Not much is known about Alex, even if I did make sporadic contact by email: from what little we’ve gathered he too enjoyed the popular cactus vice. But as I said, I don’t really know much about him.

Ten years later another “visionary” Mexican established an apparently easier route (note apparently, since this route was later cleaned, freed and graded 5.13- by Alex Honnold). The climber was Jimmy Carse, quite a character who spent his nights playing cutting-edge Electro music in a club, making good use of every drug imaginable, and as soon as the sun rose instead of going to sleep he’d head to El Salto and add some new routes. He too is now in a detox center in the US.

So … the first three who had climbed or attempted that face had perhaps been attracted to the El Chaman vortex. The lure towards it got stronger and stronger. Attempting a new route there was something we had to experience.

Five days after our arrival Simone and I climbed the pedestal and reached the fixed rope left insitu by Paco and Alex, a single 100m static line abandoned two decades ago that led to an impressive overhang, a “babao” as Simo immediately nicknamed it. We stashed some gear on the ledge, fixed the first section and then abseiled off, ready to return the next day. The rock was dirtier and looser than we’d expected, but the line was crazy, those two Mexicans had been real visionaries twenty years ago. After 6 days of climbing we reached the “cumbre” or better, a point just below, where the difficulties end the and the cacti begin.

These days obviously weren’t, due to weather or fatigue, consecutive. Shortly afterwards Marco had to catch the plane. When he left us Simone and I attempted to free the route, but we weren’t alone, we were joined by a stray dog ​​from the village Perro. All the climbers there loved and cuddled this dog, and we did too, but with the others the dog could trundle up to the crag, get stroked and sleep in the sun. Instead, it chose to follow us, who left it there below the face, alone in the shade all day, while dodging the loose rock. We never understood why, but it chose us, it didn’t want the simple things in life but instead chose the least healthy of all. It had no rest days, it always set off early and returned following the light of the head torch… all of which it wouldn’t have done had it followed the other climbers. 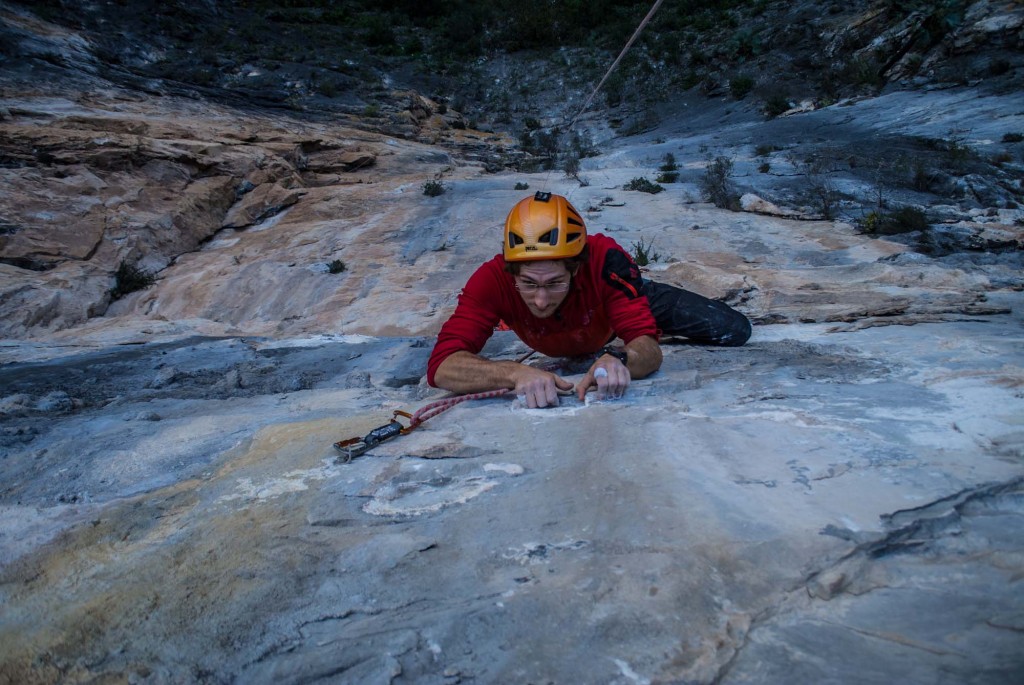 In the end the route topo is almost clear and complete, only 4 of its 14 pitches need to be freed but we were nevertheless able to give it an approximate grade. During those super cold days we gave it our best shot and became faithful companions to painkillers and anti-inflammatory drugs.

El Chaman Loco now exists and we’ll certainly return and try to climb those pitches we haven’t in a single push.

A huge thanks goes to Alex and Connie, loca husband and wife, who helped us and looked after us at their home as if we’d been best friends forever. I could tell you some amazing things about them, too, but they would lead too far away from rock climbing and maybe this isn’t exactly the right place for stories like these.