Before the arrive of the summer 2012 Luca Passini succeeded in free climbing a project bolted
some years ago in the Cave of Mandello, his local crag. “Make a wish”, which has been rated 8c+,
has kept Luca busy for a long time, and eventually this is one of the hardest pitches of the crag,
completely natural, and maybe the last line available…But as Luca says “in the cave there’s always
something to do…”

Make a Wish, by Luca Passini

When I had the luck to meet Norbi (Norberto Riva) and Ballera (Marco Ballerini) I still had to
understand many things, I had just approached the climbing world and had already lived some of its
aspects, but still the sport climbing dimension was unknown to me.
Until that time, I had climbed up to 6c (and sometimes aiding on the pegs); that day we went to
Valgrande, and I was astonished to see how they were climbing these lines, rated 8a/8a+, only in
pronouncing that grade, my mouth was blocked. They also let me try to climb, I was fighting my
way up on those holds glued on these totally blank walls, which weren’t climbable without artificial
holds for the standards of that time and maybe also for today’s standards. I had no idea of what I
was doing. 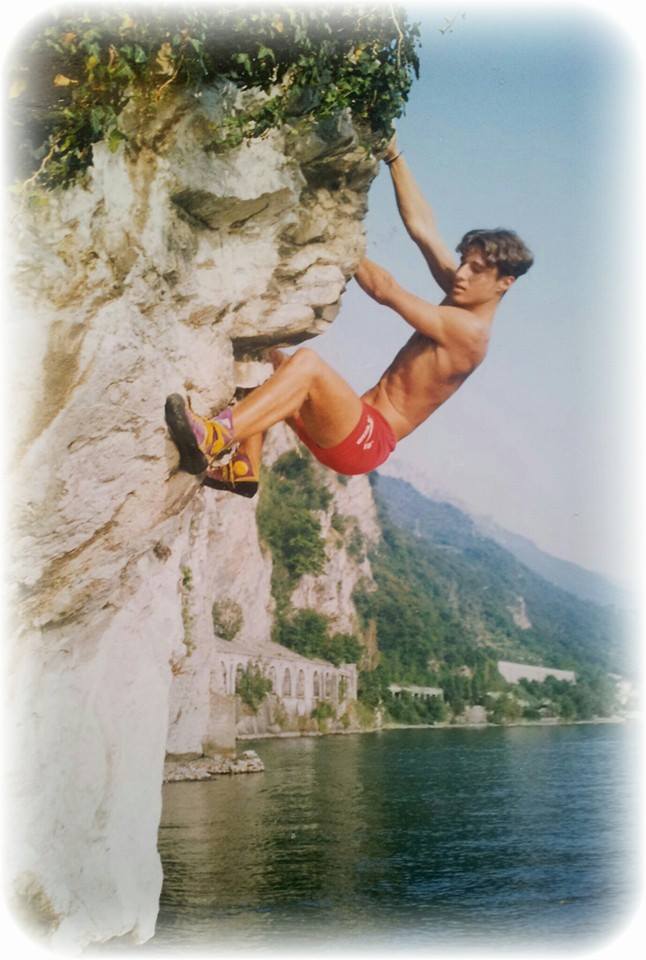 A few days later, the bad weather, drove us to the Cave of Mandello, new spot of the moment,
which was still under bolting. The climbing gyms didn’t exist yet, but only a few home-made
artificial walls, in any case the mindset wasn’t ready for this genial evolution yet; therefore in the
weekend we were going up, also with the umbrella, to this overhanging cave, which was sheltered
from the rain.
Given the limited skills, my goal was reaching the half of the crag on the harder routes, for example
climbing half of an 8b was equivalent to climb a 7c, things which nowadays make me think over.
Also at that time the grade wasn’t the priority, the important was climbing. Climbing a lot and in
any weather condition, and doing it with my friends, the ones who I had nothing to ask, the ones
who I could exactly read in their eyes my same thoughts and motivations.
Time then made the history, my history, that place became like a second home for me, a toy just a
few minutes far from my real home, where I could go also with a few hours stolen to the daily
routine.

After having repeated Stefano’s (Alippi) routes I was trying to imagine something new, to give a
new stimulus to my expectations, the boulder was asserted since some years, the evolution of
climbing was strongly towards the natural holds and I wanted to follow that road, but without
erasing what have been done in the previous years or challenge the choices which were naturally
taken basing on the past times’ thoughts. 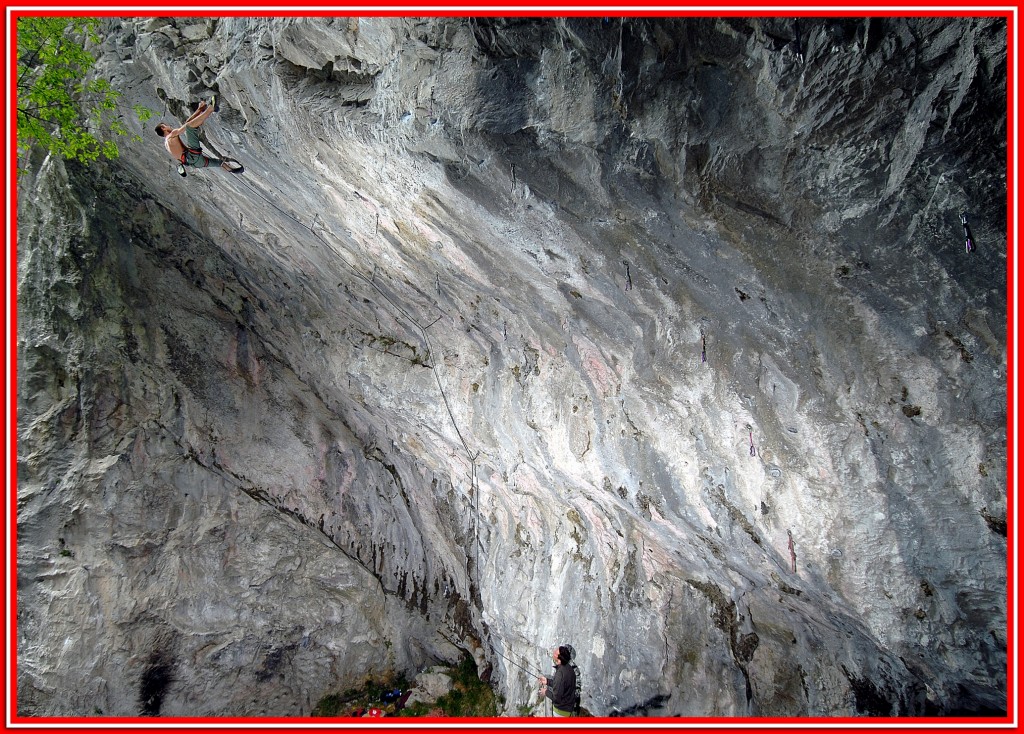 Thus, if some new routes had to be born, they would have born, but only if the nature had already
marked a hidden identity, difficult to interpret and which was only waiting to be discovered.
At the beginning I tried to understand if it was possible to combine the hardest parts of the hardest
routes, not only in search of the grade, but trying to follow the logical lines, such as the border of
the cave.
And the game was once again exciting, trying to exploit the natural holds on that inclination, in
order to pass from one route to the other. I understood that it would have kept me busy for quite a
few time.
Then I saw the chance of bolting a direct variation to “Francesca”, 5 bolts in a strong overhang with
small holds, sometimes slopy and also quite strange. Unfortunately it had a small defect: a hold was
missing, so I improved a crimp, came back to try it and realized that I could not reach that crimp.
Such a loser! I let it there; it was not worth to lose my mind on that. The following year, during a
visit for cleaning the cobwebs, I found a way to pass without the improved hold; I still remember
how happy I was when I plugged that hold with the glue and sent the pitch so quickly
And now? I had only her.
In the right side of the crag, where the cave goes to its end, where the rock looks less beautiful and
attractive, there was still a route to free climb, I had bolted it without any great conviction in a grey
journey in spring 2006. An overhanging and diagonal corner with the holds in the wrong places,
sometimes too slopy, sometimes too painful. I needed such a long time to understand all those odd
sequences. I could make every single move, but what about link them up together?
Every year a few seldom tries, hang a few hours only just to remember the moves of the feet, the
intermediate holds, the sequence for the hands, and then on the climax, the arrival of the heat, the
loss of grip, the level not good enough for the occasion.
But not this year. This year the high pressure dominated the winter and the real cold never came (or
better it came at the beginning of April), the grip has been excellent for almost 2 months, anyway,
despite I was doing my best tries ever, the route was always there like a mangy dog barking at me.
Every time I managed to do one more move, I burned off at the next, and this vanished all my
ambitions and beliefs: if I stick that hold it’s done. I couldn’t believe I was falling there!? Linking
all the pitch together was making every move harder.
The grey clouds in the sky and the rainy forecast didn’t foretell an unforgettable journey for sure,
from a climbing point of view at least. 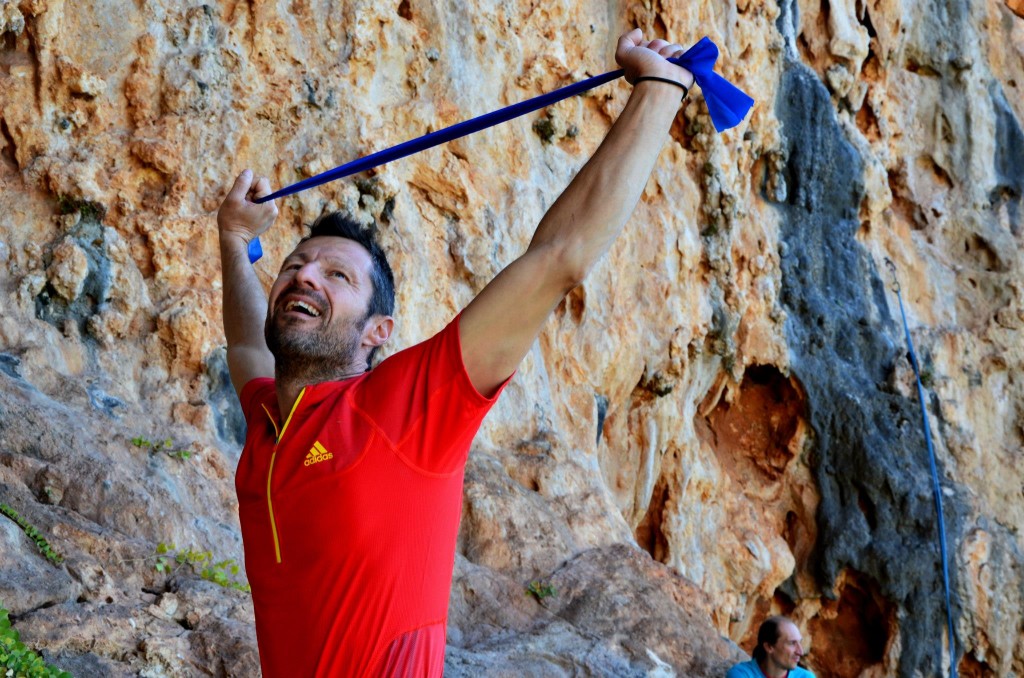 While I was hiking up to the cave, I thought that despite the weather and the humid, which I was not
used to, I was going climbing; and this thought yield me some happiness. Considering this fact and
the intense climbing of the previous day, which surely had strained my muscles, I just brought with
me a very short rope, just to try the first part of the route, the hardest and most delicate one.
But, as it often happens, it’s when you less expect it that you manage to realize your dreams, your
desires where you spent so many energies and time. The achievement of the goal is the missing link
which finally closes the circle. Inside this circle all the emotions and memories of this slice of life.
The real deal, in the end, has been to come back down with that rope just 20 meters long!