In July 2017  Matteo de Zaiacomo, Dimitri Anghileri and Marco Maggioni belonging to the Ragni di lecco climbing club made the first ascent of Rivotra Mahery (strong wind) a new 700 meter rock climb with difficulties up to 8a+ on Tsaranoro Atsimo in Madagascar.

A small Italian team comprised of Matteo de Zaiacomo, Dimitri Anghileri and Marco Maggioni has managed to establish a new route up Tsaranoro Atsimo, the beautiful granite spire in the Tsaranoro massif in Madagascar. The new route was climbed ground-up in July and runs completely independently past difficulties up to 8a+ in between La Via de las Rubias and Dreams of Youth. All pitches were freed individually, but time ran out before the Ragni di Lecco climbers managed to make a single-push free attempt. 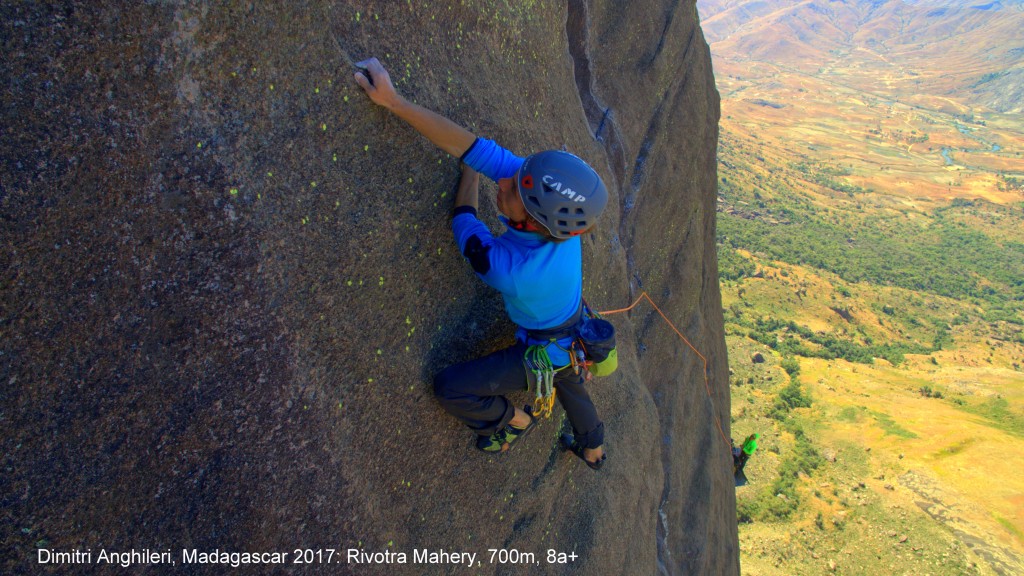 De Zaiacomo told planetmountain.com “All important decisions were decided by chance, we played rock-paper-scissors or similar games and on day one I stayed put while Marco and Dimitri quickly climbed the first pitches through a bulgy section. that win a kind of bumpy advance. Three slab pitches, not too difficult given the easy angle.

The next day I took the lead and as the angle increased, so too did the difficulties. We managed to tun things out a bit and use few bolts, but nevertheless we began to have doubts: would we have enough gear? And enough fixed ropes to reach our new highpoint?”

Worried about the difficulties the trio returned to Tsarasoa camp with moral at a lowpoint, but a chance encounter with Edu Marin and Sasha DiGiulian helped shift the balance. Marin and DiGiulian had just repeated Mora Mora and not only glowed with infectious positivity, but also gave the Italians some fixed ropes which proved instrumental to their success.

de Zaiacomo recounts “Edu Marin and Sasha DiGiulian had just free climbed La mora mora and the sparkle in their eyes was the same as the one we’d dreamt of. Furthermore they gave us some static ropes and a single rope and at that point, after this unexpected blessing, we couldn’t fail. And without their help, I’m not sure whether our adventure would have turned out as well as it did. 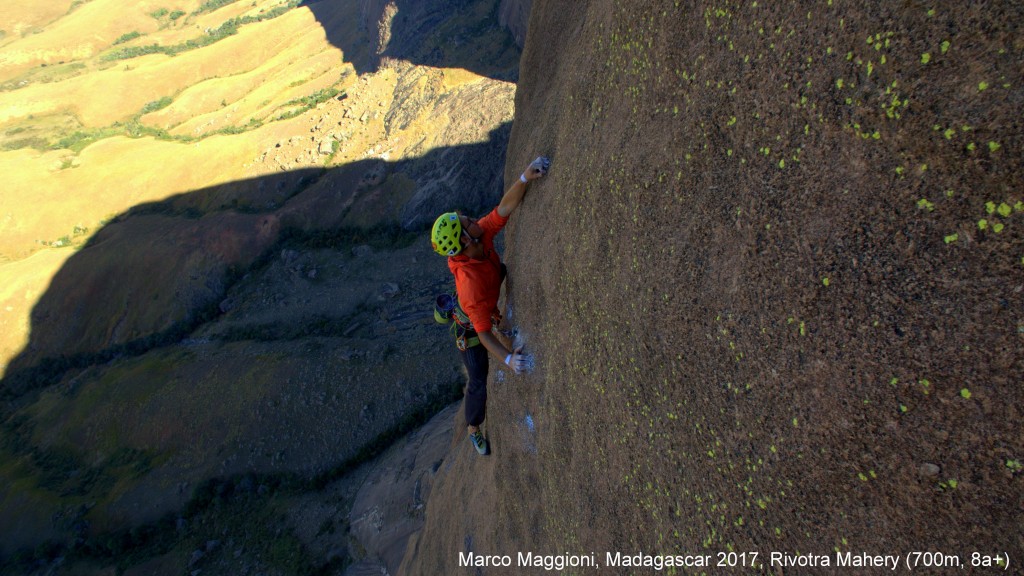 With renewed confidence we started climb again, swinging leads, everyone getting their job done, those who didn’t climb set up the fixed ropes, and soon we were like a well-oiled machined, like we’d done nothing other than establish new routes together. Everyone had their bit of the cake during the first ascent! I for example will always remember the last pitch that leads to the final ledge, pitch 11. 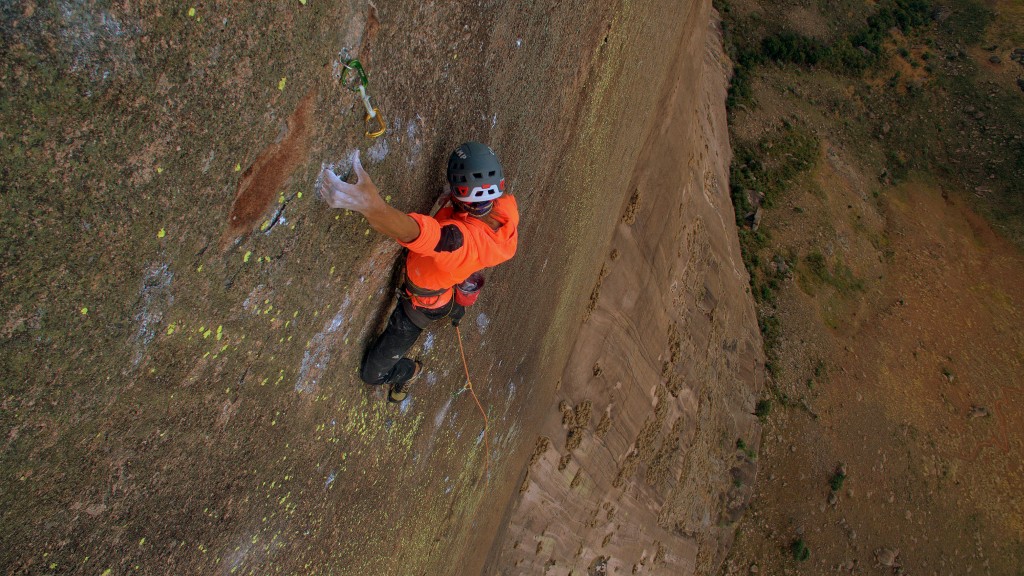 It was a cold day and the wind blew strongly, I left the belay and after a dozen meters the logical line of holds led me around an arete. Once on the other side, I could no longer communicate with the others because of the wind, and I couldn’t even see them. I was alone on a wonderful black slab that alternated technical climbing and small bulges with hidden bouldery moves up beautiful crystals! Just my type of climbing! The moment was magic and, all alone up there, I dared to make some long run-outs and only came to a halt when the ropes came to an end and realised 60 meters had just passed below my fingertips. The magic and the wind obviously disappeared when I had to free that pitch. I spent 60 meters cursing to myself for having placed the bolts so far apart on this 7c.” 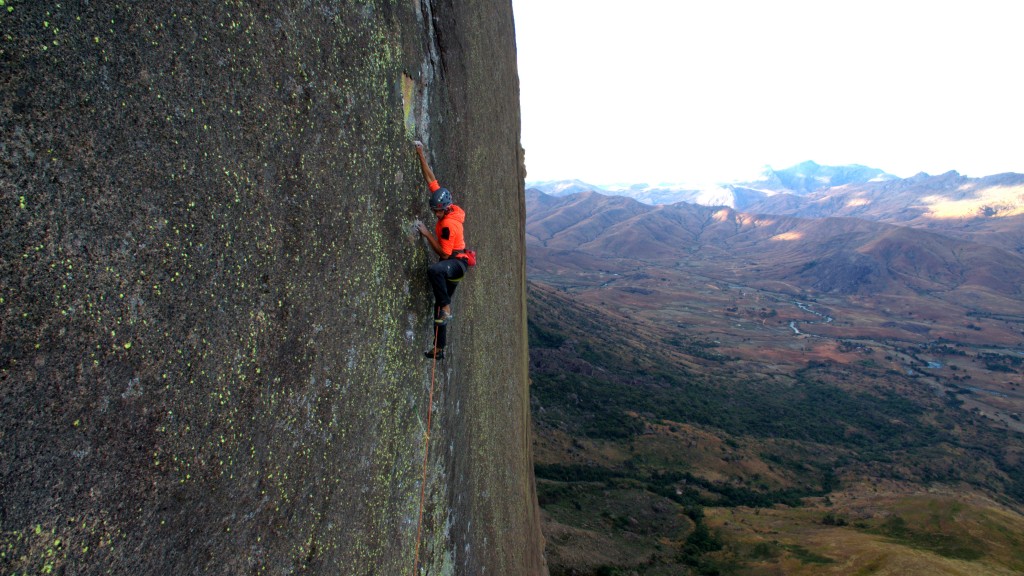