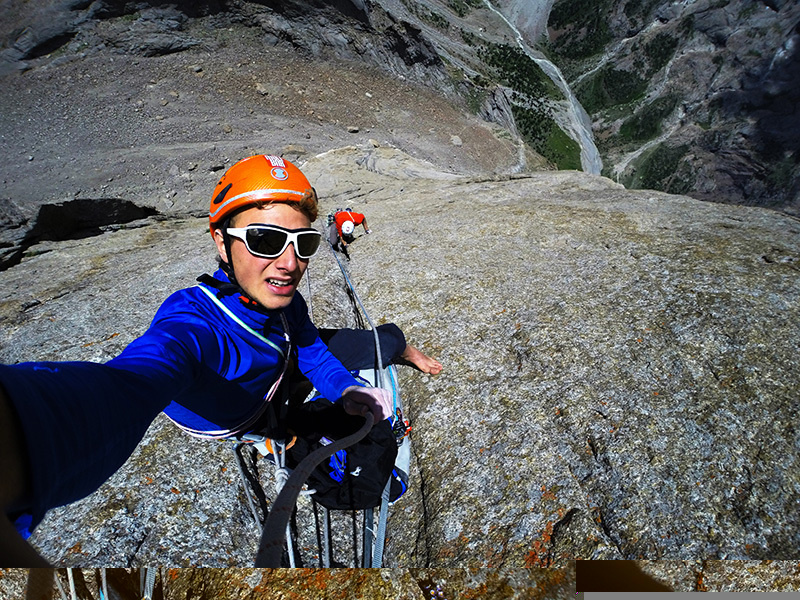 Here the report of our FAM, First Ascent Machine

In mid-June Matteo De Zaiacomo ‘Giga’ and I, excited after reading an article that had been published in an American climbing magazine, set off to Kirghizistan. After a few days travel we reached Batken, from here we continued by car and then trekked for two days (circa 40km) to reach our Base Camp. The location was beautiful, with a green valley basin and some old cypress trees providing an excellent base for our tents. Ak-su means dark waters, as soon as we see the river we understand why.

Atlantide
On our first morning we left Base Camp and reccied the crack that runs straight down the middle of the South Face of Ortotyubek (also called Central Pyramid, 3895m circa). That face had probably never been climbed before, the line looked climbable and so we decided to stash our gear at the base.
We returned the next morning at dawn, warmed up the rubber on our climbing shoes and set off up the slab that led towards the long arch below the crack. We decided to both climb and haul a light bag, meaning that we had to exit the face that day.
The crack was beautiful but wider than we had thought. After 100m it petered out and so we continued up via a corner. Clouds started rolling in. Shortly below the summit it began to hail, we quickly raced along the ridge towards the edge of the face where we hoped to find an abseil piste. When the storm stopped it became dark.
We needed eight hours for the descent (just like the ascent), also because our progress was hampered by a broken rope. We rested briefly and completed the descent, after 22 hours on the trot we returned to BC.

Unknown route
We scoped a second line on the same mountain and set off, after a few days rest, only to discover that it had already been climbed. The granite was extremely weathered on the lower section, where we followed a series of corners and thin cracks up the SW Arête.
The route was really beautiful but we were shocked by the fact that it had been climbed without showing any respect to the rock; many bolts had been placed (and subsequently removed) as had bat-hooks. We followed this rather forced line to reach a completely smooth section where the bolts had been removed. All we could do was vent our anger and descend.
We returned two days later, climbed as quickly as possible and then traversed to avoid the featureless section to continue up some cracks, only just visible from below, to reach a niche after a further three pitches. It started to snow and so we decided to sit it out and rest for a while, seeing that we’d been climbing non-stop for 6 hours. We’d done the hardest climbing and so we waited for the storm to end. We even found the route book in a glass containers, but it was soaking wet and written in Russian: we had a hard time deciphering it.
The storm lasted longer than usual, showed no sign of improving and the face was soaking wet. We hurled our ropes and started the descent.

Petit Tour and Perestroika Crack
We were downbeat: during the next week it rained every day. When we got tired of waiting we reached a 300m route on Petit Tour, marked by a long offwidth carck clerly visible from below. From we summit we were struck by the enormous face located opposite us, we simply had to climb it.
Finally some stable weather set in and, excited, we lost no time and prepared our gear for our final objective: repeat a route reputed to be one of the most beautiful in the whole world. Various teams, above all Russians and Americans, come to this valley for this route alone, and understandably so!
That afternoon we ascended towards Pik Slesova (or Russian Tower), the idea being to sleep directly below the 800m high crack line called Perestöicrack (or Perestroika Crack), first climbed in 1992 by a French team and freed a year later.
The weather seemed to hold and so we made a last-minute decision to speed things up and attempt to reach the ledge at half-height that same day, despite already being incredibly late (three in the afternoon…)
Route finding problems are out of the question on this perfect splitter crack; we climbed efficiently and climbed faster than our breathing allowed us to. We climbed non-stop for six hours and managed to reach half-height in last light.
We bivvied through the coldest night of the entire trip. Just one sleeping bag for the two of us meant wind entered and exited everywhere. We wrapped up into the cellophane cover and left our “greenhouse” fourteen hours later, when the sun finally began to warm the face, at midday.
I managed to onsight the crux pitch but messed up the next small corner which can only be protected with microfriends which I hadn’t taken with me. I really wanted to climb the entire route free but a slab below me awaited my tinniest error; I hesitated, then decided to rest on some gear. Later, during the descent, I then climbed this pitch free.

Solo
Bad weather set in once again but we were satisfied. But the flame rekindled on the last day. Giga had back ache and so I set off, using a new self-belaying technique, up the Central Pyramid buttress to establish a short new slab climb that afternoon.

TIPS FOR CLIMBING IN THE AK-SU VALLEY
– It’s fundamental that you use an agency; search for one on the web as it’s impossible to get around without one. Very few people speak English. They deal with VISA requirements to Kyrgyzstan and Tajikistan, military permit to enter the valley, the domestic flight to Osh and Batken, hotel and trekking.
– We flew with Turkish Airlines to Bishkek ,at a good price and for about 90 € you can even take sports luggage on this route (32kg Max).
– In the capital you can purchase a wide variety of food and useful stuff (we got gas canisters via the agency). As to food for climbing we got: pasta, soup bags, chocolate bars… the rest can be purchaes at Batken.
– The cost for luggage on the domestic flight was about 0.8 € per kg.
– Base camp was reached by trekking for 2 days (1 day needed for the return); very warm, little water.
– Base camp is situated at 3000m, the temperature were around 15/20°C by day and dropped to below 10°C by night. During our stay (June-July) it rained quite often in the early afternoon, while the weather was always good in the morning.
– Inmarsat satellite phone didn’t work, Turaya did (this can be rented from the agency), Iridium we don’t know.
– We never touched snow nor did we use our boots for routes such as Perestroicrack and Ortotyubek, and probably ice climbing gear isn’t needed for the other climbs.
– The granite rock is generally solid and clean, up cracks or slabs, with a grain which is very similar to that found in Italy’s Valmasino.