In autumn 2014 Paolo Marazzi, Matteo de Zaiacomo and Luca Schiera completed the first ascent of King of the Bongo, a new climb that shares the first two pitches with Passi di Bimbo to then explore a 700m, independent, difficult and at times dangerous line up the Qualido Face in Val di Mello, Italy. Riky Felderer, the climber and photographer who documented the first free ascent on 25-26/07/2015, provides the report. 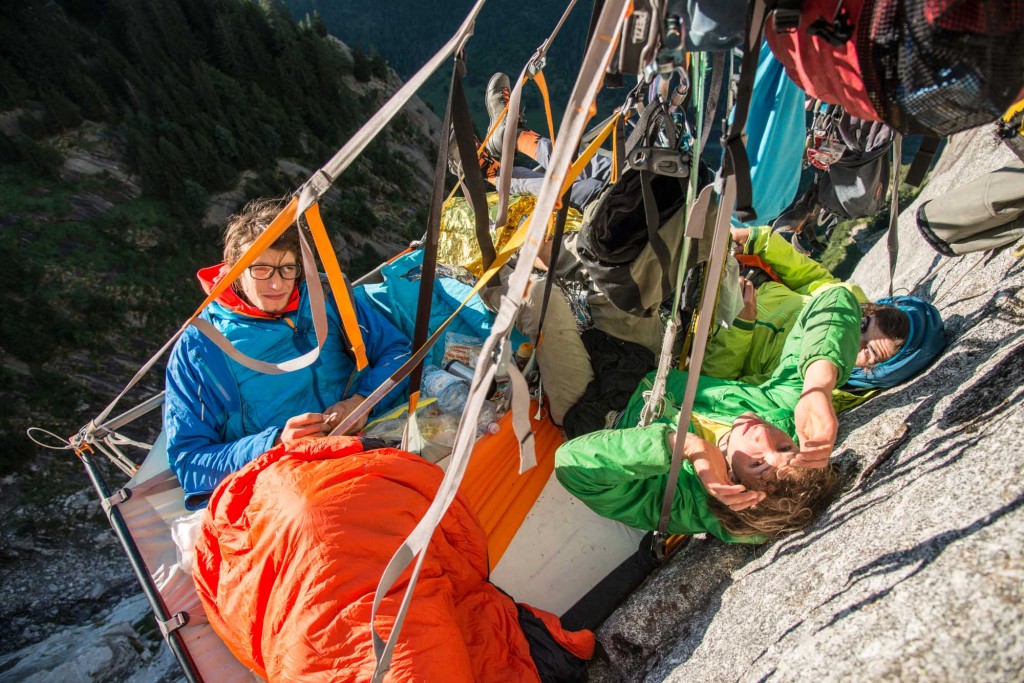 Over 700m of climbing up Qualido, one of the major faces in Italy’s Val di Mello. Only the start is shared with an existing route (Passi di Bimbo, Paolo Vitali e Sonja Brambati, 1997), all the rest explores new terrain. Established ground-up over a period of 13 days. No bolts, not even at the belays. With some exposed sections, hundreds of metres above the deck…

This, in short, is King of the Bongo, the difficult new rock climb established last autumn by “Ragni di Lecco” members Paolo Marazzi, Matteo de Zaiacomo and Luca Schiera up the impressive East Face of Qualido. A route that has “all the characteristics of becoming a “Qualido classic” and that was freed by the three climbers at the end of July 2015. During that two-day undertaking the trio was accompanied by friend, climber and photographer Riky Felderer, who shares that experience on the peak and remembers why, at times, it is more important to know who made the first ascent of a route rather than its grade.

KING OF THE BONGO by Riky Felderer

The Facts.
Dawn, Qualido, many metres above the deck. The sun hasn’t reached the portaledge yet.
“Perhaps I’m going to throw up!” Giga greets the morning with this wake up call. Luca complains about leg cramps, I moan about my back. Paolo, contrary to his usual self, says very little indeed and concentrates on preparing his speciality: “chocolate polenta”. The four of us have just spent the night on a portaledge designed for two, so we can’t expect much else really.

It had all begun on Saturday morning, at the Val di Mello car park. This is actually located in Val Masino, but for tradition’s sake we’ll continue to use the misnomer. We’d met at 7, split the gear and set off. The young guns intent on making the first free ascent of their new Qualido outing, I tagged along to try and document the events as they unfolded.

The weather forecast isn’t the best but due to a series of missed chances this happens to be their only window of opportunity. The path winds its way steeply through the 100-year-old beech tree forest that, every now and then, provides brief glimpses of Precipizio degli Asteroidi and Qualido, the two huge rock faces that prove an excellent excuse to stop and discuss route lines, new ideas and projects. As time passes the talk revolves around the usual two subjects, namely climbing and the thing that all climbers can never get enough of. So the discussions are always lengthy to say the least!

As I observe them talking to each other I notice that the three youngsters reflect the peculiarities of some of the early valley pioneers, which makes me wonder about life’s coincidences and natural cycles. In any case there is histrionic Marazzi, De Zaiacono (a.k.a. Giga) and his love for climbing up tufts of grass, and the pathological teetotaler Luca Schiera. But we’ll find out more about the psychological profiles of these first ascentionists in due course.

The long approach up Val Qualido is the usual sandbag. The guidebooks mention slightly more than an hour and although it actually doen’t take much more than an hour, it’s always extremely tiring. Damn that bad habit of mine, smoking… When we reach the base Giga and I discover, face down in the Val Qualido river bed, the remains of a beech tree “embraced” by a belay which I believe must have belonged to the Paolo Fabbri route. This had been taken away by rockfall a few years ago. Not the best of omens! We pretend we don’t see it. Once again I reflect about the cycles of life.

The route starts a few metres to the left of the rockfall, up good rock. And these first slabs, warmed by the sun and with eternally run-out fixed pro, immediately put Luca on guard as he takes the lead. A second pitch up vertical grass guides us into the heart of the rock face.

This is one of the steepest sections of the Mello big wall, incredibly continuous and crossed by a myriad of cracks and corners of rare beauty. Hold on, this isn’t El Capitan, that’s for sure, but hereabouts, I mean in the Alps, there aren’t many other faces like this one. And I’ve seen a fair few in my time to stick my neck out and state this confidently. This huge theory of obvious and logical lines, as mentioned, is miraculously connected by some extremely smeary moves or by some “melloblocco-esque” boulder problems. The only difference being that here, below your feet, are 4 or 500 metres of absolute void.

And that there are no bolts to sooth the psyche of those fearful lovers of sterile sport climbing achievements. The route line is fairly “obvious” and the new generation of “melloers” continued where the early pioneers of this climbing game had left off, respecting the ancient tradition of offending the rock as little as possible. Which makes for a great read now and a hearty laugh at the bar, but also slowly but surely contributes in unnerving the team, in particular those who plan to ascend the worn-out fixed rope clipped to some pro, of somewhat dubious nature… not just aesthetic!

But, for those who love the athletic side of things, I’ll briefly talk about the pitches. And perhaps also about the Grade, that ancient mountain God around which everything revolves! The pitches, in short, reflect the spirit of those who first climbed them, while the Grade is something far more sterile and connected to a climber’s physical shape. So all this translates into perfect corners with finishing moves up tiny crimps for Marazzi, still in two minds about where he really belongs. Unsure as whether to satisfy his natural inclination of taming the most obvious line by becoming one with it, or whether to force his way up a slab with a series of powerful and dynamic moves (that don’t always pay off). Then there are those complex sequences, comprised of dodgy and fairly dangerous moves, up poorly protected slabs for Luca who, stoically, accepts the risks. Or grumbles in his introverted and sometimes deadpan manner before setting off. Cheerful and smily down in the valley, when he’s nervous he changes considerably, badly masking his mood behind words based on double entendres and irony. At time extremly poignant. And then, last but not least, there are the cracks, often damp, split by vertical rock faces for Giga, who accepts it all with good grace (with a capital “g”). Just like when, with an almost absurd smile, he admitted to having abseiled down the wrong rope. Which one? The one that finished 2m below the belay without a backup knot. Which meant he’d hung there, with the end of the rope trailing a mere 20cm from his Grigri, unable to tie a knot that would have stopped his fall. 500 metres above the river bed, from where we’d set off the day before!

And then there’s the portaledge. I’ve got to discuss the age-old question of sleeping on the face! First off: if we slept like this, then it’s because the face didn’t offer anything more comfortable. We’re certainly not masochists or madmen! Had we been able to sleep on a comfortable ledge, we certainly would have done so. But instead, on this compact shield of beautiful granite, there was no other option. We ever tried to do three in a portaledge and one on an improbably hammock suspended below. Marazzi countered Luca’s proposal by metaphorically kicking the ball into the corner, or rather, by saying “I get seasick sleeping in a hammock”. Luca, impassive, handed the object to the other two and Giga took it. Circus-worthy maneuvers followed as Giga hung the hammock in the dark, above the truly nauseating void and then… very nearly broke the portaledge in two. The result: the four of us slept widthwise, knowing full well that if only one of us moved too much, we would have all flipped over. Can I say it? We had a shit night! But we won’t be forgetting it in a hurry!

The rest of the route is comprised of grades already seen before, less intense but not for this reason less beautiful, bar a terrible and truly dangerous slab. Not extreme, framed by vertical meadows, but really poorly protected towards the end. Just when you think you’re out of harm’s way and see the sequence of inclined walls and beautiful cracks and corners that pave the way up to pleasant climbing towards the end of this vertical ocean.

Some readers might complain and say that I didn’t mention the pitches nor the grades! How accute and wise! But this is what the route is all about. Yes: this is the route description. I know, I can be old and pedantic at times. My wife even calls me “rikipedia” when I exaggerate… But a route isn’t a series of dots joined by a number. A Grade!

A route is an experience, a psychological reflection of the first ascentionists. It is the dendritic pattern of their brains and their love for climbing as it unfolds onto a rockface. And before knowing what grade a route is, above all when it was established ground-up without bolts, with pegs (less than a dozen in 700m) and trad gear only, then it’s far better to know who put it up in the first place! And to understand that it fits perfectly into the context of the climbing in Val di Mello.

Recommended reading
9000 metres above the meadows.