On 20/07 the Italians Karl Unterkircher and Daniele Bernasconi reached the summit of Gasherbrum II (8035m) via the virgin North Face, climbing a beautiful route and resolving one of the most famous problems in the Himalaya. 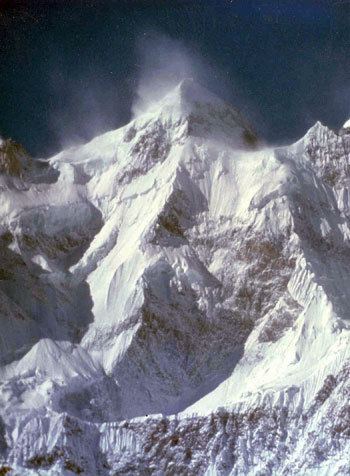 The north face of Gasherbrum II and the unreachable side of our dreams. It’s happened once again, like in the best fairy tales. Like in those difficult and suspend adventures which seem to nver end but then turn out real as if driven by destiny… On 20 July at 20.00 local time Karl Unterkircher and Daniele Bernasconi concluded their ascent up the unclimbed spur through the North Face of Gasherbrum II. In reaching the 8035m summit the duo carried out the historic first ascent of the Tibetan north face via a beautiful route in a “simple” style (i.e. lightweight, fast and direct) which climber’s dreams are made of. Unterkircher and Bernasconi’s joy was shared by the third expedition member Michele Compagnoni who had to renounce on a but of personal happiness a mere 150m from the summit and with the greatest difficulties already overcome.

There can be no doubt that this is one of the best ascents of the Himalayan season and also an important milestone in the history of the world’s highest mountains. The North Face of Gasherbrum II was one on the few remaining great “unresolved” problems, identified decades ago by Kurt Diemberger, the great explorer and first ascentionist of two 8000m peaks (Dhaulagiri and Broad Peak). Few mountaineers had chosen to attempt this challenge, be it because of the difficulties in reaching the face, be it for the innumerable unknown elements along the line of ascent. Of those who chose to venture into the unknown, it is worth remembering the 2000 attempt by Romano Benet, Nives Meroi and Luca Vuerich who (contrary to most Himalayan ascents) decided to try the never-ending East Ridge. The very one which the Spanish Al Filo de lo impossibile is currently attempting.

The new route is circa 3000m high and climbs the black rock spur in the lower section for circa 800-900m. Almost at the top the Italian route bears left to reach the snow plateau at circa 6000m from where a further 2000m of difficult snow and ice lead to the summit. “There are a couple of grade V pitches” Karl Unterkircher explained from Base Camp to montagna.tv, “plus a couple of demanding sections. The rest should be roughly grade IV, even if climbing with boots makes proper grading a bit more complicated. The line, which we fixed with 1200m of rope, is excellent and completely safe. Only the access to the start of the route is a bit exposed to the seracs which often crash down from high above.”

After having climbed the first section up to the central plateau in three days and having fixed 1200m, Unterkircher, Bernasconi and Compagnoni set off on 19 July from ABC. They bivvied at circa 7000m and continued directly to the summit which Unterkircher and Bernasconi reached on Friday 20 July at 20.00. Michele Compagnoni on the other hand traversed to the west col at circa 7850m due to the time of day and stomach problems which had accompanied him throughout the climb. At this point the descent from the summit was obvious: the two reached Compagnoni and descend down the easier south face (Pakistan) along the normal ascent route. At the base they were met and helped by Italian Mario Merelli, a member of the Ragni di Lecco group just like Bernasconi.

Apart from the joy and our congratulations for this new route up the unexplored face, it is well worth underlining the strength of Karl Unterkircher, a member of the Catores mountaineering group in Val Gardena. In 2004, during his first Himalayan experience, he climbed both Everest and K2 without supplementary oxygen while on 22 May he climbed a new route up the South Face of Jasemba (7350m, Nepal) together with Hans Kammerlander.

The immense talent of Daniele Bernasconi needs underlining too: this climber is not only capable of climbing 8b, but he also has the lungs, determination and technique of great Himalayan mountaineers. Annapurna and Makalu are proof if proof were needed. Michele Compagnoni, the nephew of Achille Compagnoni who made the first ascsent of K2 together with Lino Lacedelli in 1954) demonstrated that his K2 summit in 2004 didn’t come about by chance, and he can be justly proud of his near miss on GII. Expedition organiser Agostino da Polenza told us “They’re good climbers” and added “they’re motivated, technically very good but above all they have a burning passion! They really gave me a present: I’ve been dreaming about the face for 24 years.”

Yes, this is a fantastic ascent which confirms that something is moving in Italian and Himalayan mountaineering and that it is possible to attempt something new!