The Manolo’s route at Cima d’Auta 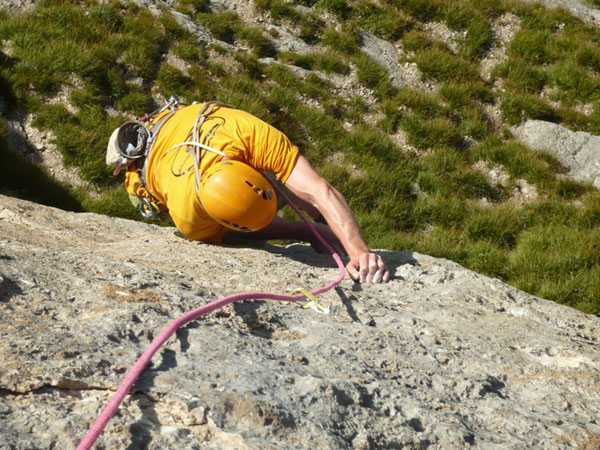 Matteo Della Bordella news
Matteo Della Bordella (25) is one of the best young italian climber, with a big experience around in the Alps, Wenden, Raetikon, Greenland and Mexico. Matteo started very young his climber career; at the age of 20, did  onsight, leading all the pitches the route  “Attraverso il Pesce” in Marmolada.
In the last days of August, Matteo carried out the second ascent  of “2 spit alla fine ” at Cima d’Auta (Marmolada – Dolomiti) a expo-bolted route first ascended on 2007 by Manolo and Omar Genuin and later freed by the same Manolo.
Matteo did the free ascent , except the first pitch;  L1: 8a+ (not free ascended) L2: 7b, L3: 6c, L4: 7b/7b+ (the best pitch, but avoid to fall…), L5: 7a, L6: 6b, L7: 6c, L8: 7c (boulder at the end  ). 7c obl.
In the last period, Matteo was often in Tessin (Switzerland). Here, with David Bacci has done the FFA of “Nel dubbio sali”, a 230m route with a 8a pitch, opened on 2007/2008 in Val Bavona (Switzerland) .by the young talented swiss climber Luca Auguadri
Together with Auguadri, Matteo opened and did the free ascent of Non è un paese per vecchi 430m, 7c+ max, 7b+/7c obl., on Linescio wall, in the valley to Bosco Gurin – Valle Maggia.
Few days before he redpointed, with David Bacci, the route  “Mares” 7c on SE wall of Brenva Aiguille – Mont Blanc.
With well known Dolomites climber Alessandro Baù, repeated almost the whole route Fantasia, the trad masterpiece of Maurizio Giordani on Marmolada’s south wall: the crux pitches were all done, but the party had to leave the route shortly before the top, because a storm was approaching.