“If a man is not willing to fight for his dreams, either his dreams have no big value or it’s the man who is not worth much…”

Everyone who had the luck of being at least once in Patagonia with good weather, cannot forget the sight of Mount Fitz Roy, and its amazing East face, that colors with red at dawn, and is well visible from the village of El Chalten. This wall is probably the biggest, most imposing and aesthetic in this mountain range. With its 1300m of difference in altitude from the base to the summit, Fitz Roy East face is one and a half time longer than El Capitan, steep and sustained till the 3405 meters of the summit.

The way in which this wall was climbed for the first time is part of the history of alpinism and, in my opinion, remains one of the most legendary ascents of all times.
In the late sixties and early seventies several big expeditions coming from Italy (two different teams) France and Switzerland attempted to climb the east pillar of Fitz Roy . In 1974 the Swiss came mighty close to success reaching a high point 300 meters below the summit.
In 1976 a large team of Ragni di Lecco went to Patagonia, with the goal of climbing the East pillar of Fitz Roy. After months of bad weather the most of the members of the expedition left; only Casimiro Ferrari and Vittorio Meles remained and decided to give it a last try.
The pair succeeded in the climb after 6 days spent on the wall; on the last days before reaching the summit, Casimiro Ferrari took a bad fall and broke his front teeth. He anyway decided to push on, with Meles chewing the food for him during the bivys.

In February 1976 this huge wall was finally conquered thanks to the use of more than one thousand meters of ropes, countless pegs, hundreds of meters of aluminum ladders, about 50 men in total. Even though in the end, success was possible mostly thanks to the character and determination of one man: Casimiro Ferrari, “el jefe”, “el rey de la Patagonia”.

In the following years a bunch of other routes were opened on Fitz Roy East face, and lately a few strong climbers managed to repeat some of them in alpine style and free climbing (Caldwell, Favresse, Villanueva).
But still in 2016, the line by Casimiro Ferrari remains the purest and the proudest of the face, starting in the lowest point and going straight up till the summit, and incredibly, 40 years after the first ascent, was still waiting for the first repetition!

The first ones who put their hands on this route, in recent times, were probably Nico Favresse and Sean Villanueva, during their free alpine style ascent of El Corazon (with variation) in 2012. They noticed a copious amount of aluminum ladders and old gear used by the first ascenders and now abandoned on the wall, which were currently hindering the progression.

In January 2014, while searching for new big projects in Patagonia, a smashing idea came to my mind.
Why not to try to repeat the 1976 route, clean it from the abandoned gear and free climb it!?!
After climbing Torre Egger West face in 2013, I was now looking forward to tackle another new, big challenge at my personal limit. Since I saw this wall for the first time I dreamed of climbing it and now I had found also of the way in which I wanted to climb it.
My goal was also to show to everyone that Ragni di Lecco are still doing world class alpinism like 40 years ago, with a renewed style and philosophy, but with the same spirit, passion and determination that Casimiro taught us.

In February 2014, along with my friends Luca Schiera and Silvan Schupbach we had a first taste of the route. That year conditions were so bad that we couldn’t go very far, but we managed to cut some ladders and bring down some old ropes. Everyone was psyched for coming back the following year to give another try to the project.

In late January 2015 the three of us, with the addition of Pascal Fouquet, were ready to try again to repeat, clean and free climb this monster. Conditions were much better than the previous year and the first 400 meters went all free with difficulties up to 7a+. 500 meters above the ground we stopped for bivying: Luca , Silvan and Pascal on the portaledge and myself above them in a hammock. Luxury bivy, I admit.
However, things started to worsen in late evening and night, when Silvan felt sick. We woke up in the morning and found our friend struggling with fever, cold, throat and head-ache . He was really not in the right conditions for going on with the ascent, considering that with we had a remaining portion of wall, as high as El Capitan, still to be climb.
While Silvan was resting in the portaledge Luca and I took advantage of the situation cleaning and studying the following 200 meters of route, before bailing and bringing with us a few old ropes and ladders.

Unfortunately, in that season, despite having spent another month in Patagonia with this idea in mind, the right conditions for trying again never came back. We had another good window at the end of our trip, but still it was too short for our big goal, and the wall was now more icy and snowy; thus we reached the summit of Fitz Roy climbing the Casarotto route, with a direct variation on the pillar. A nice consolation prize, but far from what we were aiming at.

Anyway the overall balance of that season was not totally negative. Mainly thanks to our Argentinian and Chilean friends Inaki Coussirat (R.i.p.) and Cristobal Senoret, now the route was mostly free of aluminum ladder and old ropes. Once these two guys were able to bring down to Paso Superior more than 30kg of old ladders!! Thanks to them, thanks to the help of other local climbers, which had previously cleaned the first two pitches, and thanks to the fact that we also brought down old ropes and stashed what we couldn’t bring down with us in a way that didn’t hinder the climbing progression anymore, the route was now basically clean and waiting for a proper second ascent alpine style!

In January 2016 I went back on the route, this time with my good friend David Bacci, at his first season in Patagonia, but fresh of the recent success on the Ragni route on Cerro Torre, just the week before.

On January 17th we started our attempt. I already knew that this was going to be the one and only attempt of the season, since the following week my friend Silvan Schupbach would arrive in El Chalten and we had commonly decided to climb something else. 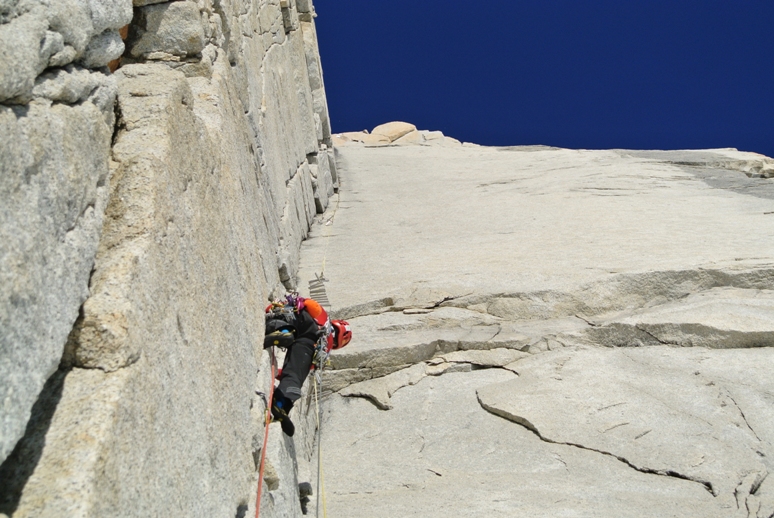 Our ascent started under the best premises: the wall was in the best conditions I had ever seen in the last three years and, being at my third try, I had the first 400 meters quite dialed. In one day we were able to almost reach the highpoint touched by me and Luca the year before. Free climbing the first 650 meters of wall at maximum 7b, with the exception of one short wet section.

At 6pm, looking for a bivy spot, David shouted “Que suerte!”. I followed him up with the dream of a 5 stars bivy ledge and I was quite disappointed when in the reality the ledge is just a little bigger than a bench! However that evening the “suerte” completely let us alone…The sky covered with clouds and it started raining and snowing. Since we didn’t bring the waterproof bivy bags our only option was to jump in our sleeping bags and pray that the snow stopped. It went on snowing all the night and, already after a few hours, our sleeping bags and clothes were soaking wet!
Eventually the new day brought us some “suerte”. When the situation started to become really critical, with the risk of going in hypothermia, the good weather came back and, thanks to the East exposure of the face, we could warm up in the first rays of sun and started drying all our clothes and gear.
After a couple of hours of waiting and recovering we were able to move up again.

Just a couple of pitches later we lived another short but intense moment…David took the lead and, while climbing, he pulled out from the wall a block as big as him. He fell on his back on the right, the block smashed the wall just one meter left of him. I could just powerless witness the scene, while catching David’s fall. Luckily no big consequences for David, a part for the shock. Once again we could move one.

Shortly after we found ourselves in front of the dream of every crack climber: a steep, sheer and blank face, 100 meters high, with only one splitter crack in the middle, dividing this amazing shield in two perfect parts.
A dream that can easily turn into a nightmare when the crack wet and icy…Luckily, it was at least a fair compromise. I had the chance to free-climb some of the roughest and pure meters of crack climbing in Patagonia, but I was also forced to aid on some wet and icy sections.

It was about 7 or 8 pm when we reached some snow patches and decided to stop for the night. In our minds we could think of only two things: the first one was, of course, the summit. And the second one was the hope that the remaining part of the route (still more than 400 meters) would have been easier and less steep that the lower portion we had already climbed.

On January 19th we were ready for our summit push. We quickly realized that our hopes of easier terrain were immediately vanished.

At some point we had a hard time finding the route: in front of us an overhanging blank bulge, on the right a blind, featureless corner and on the left a pile of loose blocks and a waterfall coming down from the top. I put on my waterproof jacket and went left for what was the only realistic option, trying to move up as fast as possible while climbing under a cold shower…When I eventually managed to cross the waterfall, of course David couldn’t hear me and had no clue of what was going on. Now I had to aid on micro nuts a thin seam; it was not that nice doing such a delicate job in that harsh place and without seeing and hearing my partner. Once again I was wondering how could have been to open a pitch like this 40 years ago…hats off!! 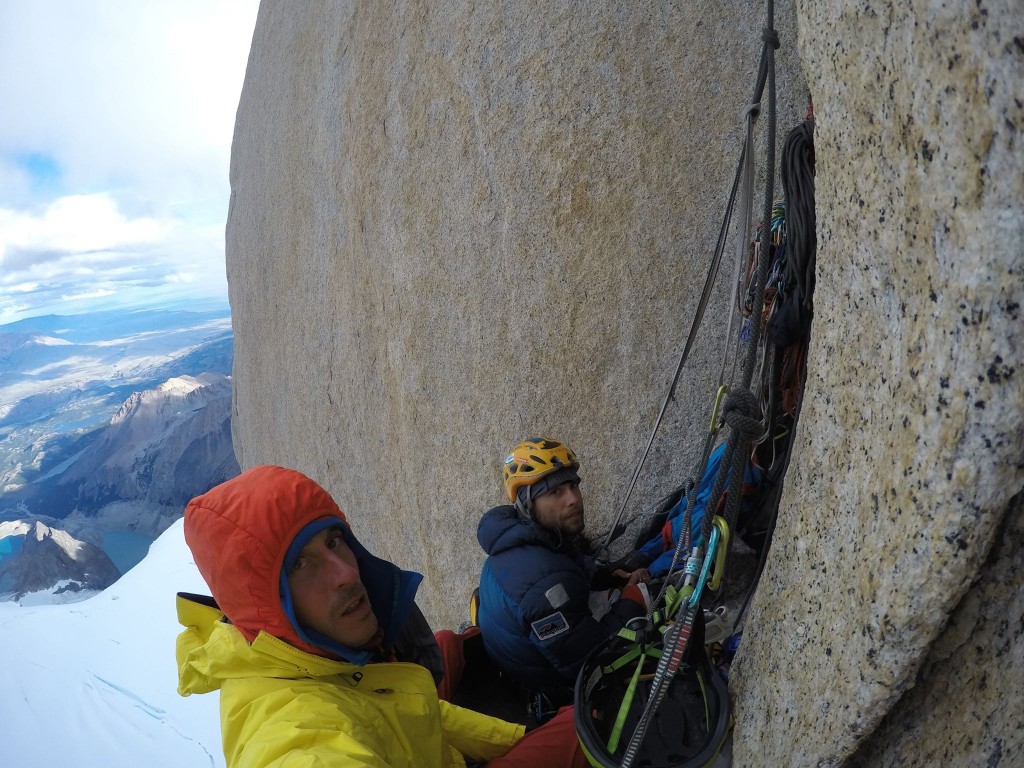 I went on leading with climbing shoes and chalk for another couple of pitches, moving left and right to avoid verglas and ice, until it was time to put on boots and crampons and grab the ice axes. David took back the lead for the last 200 meters and at 6pm we found ourselves on the summit of Fitz Roy!

I couldn’t believed we made it to the top, I was just incredibly happy and satisfied. It was the conclusion of a big project. Climbing this route, in this style, on this wall, was just a dream for me, for which I fought, in which I always believed and that now came true.
My friend David on the summit told me “El que crè crea”, four words that sum up the history of this route.